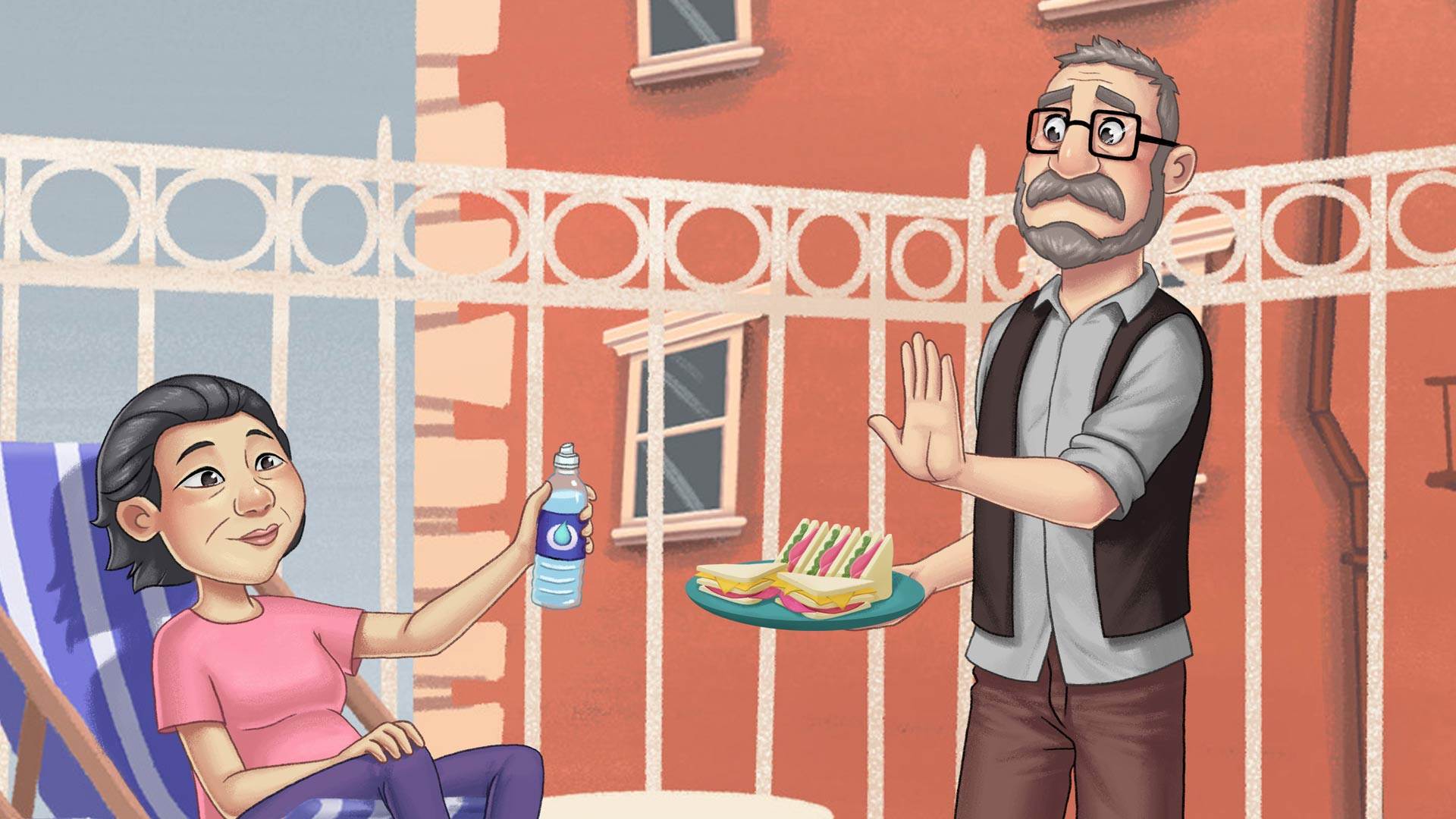 To function properly, every cell in our bodies needs to a certain level of salt. When the salt balance in the body is disturbed, many things can start going wrong.

Antidiuretic hormone (ADH), also known as vasopressin, controls the way your body retains or secretes water. ADH causes the body to retain water, which lowers the salt concentration throughout the body. The syndrome of inappropriate secretion of antidiuretic hormone, SIADH for short, occurs when your body makes too much ADH.

SIADH is the most common cause of low body salt (known as hyponatremia). [1] 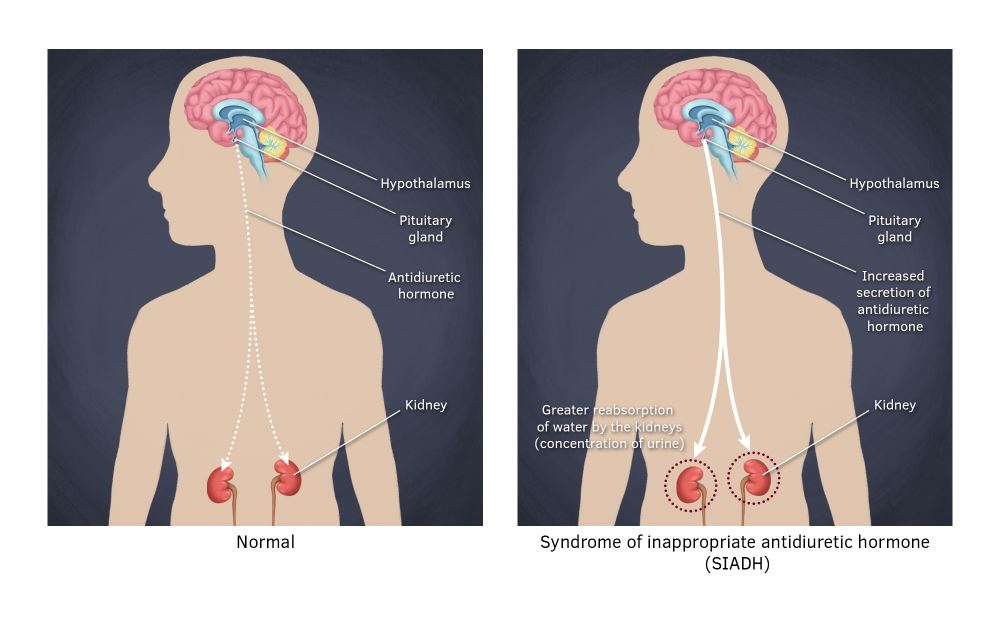 SIADH is caused by too much antidiuretic hormone in the body, which reduces salt concentration in the blood.

A substance that suppresses the production and excretion of urine.

SIADH can be the result of numerous different disorders, including, but not limited to:

SIADH can be a side effect of certain medications and substances, such as:

Cancer of the tissues lining the internal organs, body cavities, surfaces and tubes.

Inflammation of the brain, usually caused by a viral infection.

Relating to the internal lining of the uterus.

A small part of the brain that carries out many functions, in particular the communication between the nervous system and the endocrine system (via the pituitary gland).

A tumor of lymph tissue, which is rich in lymphocytes, small white blood cells that have specific immune responses.

A rare genetic disease that causes progressive death of nerve cells in the brain and spinal cord.

An autoimmune condition triggered by an acute infection, which leads to inflammation of peripheral nerves causing a characteristic pattern of paralysis that begins at the feet and spreads up the body.

Cancers arising in the lining of the nose, sinuses and throat.

A group of conditions caused by defective enzymes, which leads to a build-up of metallic compounds (known as porphyrins) normally found in tissues. The abnormal accumulation of porphyrins affects the skin, digestive system and/or nervous system, leading to symptoms such as skin blisters, abdominal pain or seizures.

Symptoms of SIADH can appear and become more severe as the body's salt concentration drops. These symptoms may include [2] [3] :

Many people with mild SIADH often have no symptoms, or their symptoms may not be recognized as SIADH symptoms. This is especially common in elderly people, where reduced mental abilities - for example, poor concentration or forgetfulness - are often blamed on age or other causes [4] .

The uncontrollable loss, small or large, of bladder or bowel control, resulting in leakage of their contents.

A sensation of sickness and unease, typically felt in the stomach, often accompanied by the urge to vomit. Nausea is a common symptom with many possible causes.

The first major site of digestion. An organ in the abdomen where food incoming from the food pipe is digested with enzymes and acidic gastric juices.

Your doctor will suspect SIADH if you display symptoms and have a medical condition or history that would put you at risk of SIADH. To confirm the diagnosis and rule out other conditions, urine tests and blood tests will be done to check your salt levels.

A routine examination of the urine for cells, microbes, or chemicals that can indicate a range of different illnesses.

If not treated, SIADH can lead to very low salt concentrations, which can interfere with the function of many of the body's systems, and is associated with a significant rise in illness and death rates [2] .

SIADH is a condition that occurs when your body makes too much antidiuretic hormone (ADH), also known as vasopressin. This substance controls the way your body retains or secretes water.

What are the symptoms of SIADH?

Many people with mild SIADH often have no symptoms. For others, symptoms can appear and become more severe as the body's salt concentration drops. These symptoms may include: nausea and vomiting; loss of appetite; stomach aches; confusion, hallucinations, …

SIADH can have numerous causes, including various cancers, brain and nervous system damage, lung problems, reaction to certain medications, and other factors.

How is SIADH diagnosed?

Your doctor will suspect SIADH if you display symptoms and have a medical condition or history that would put you at risk of SIADH. To confirm the diagnosis and rule out other conditions, urine tests and blood tests will be performed to check the salt levels in your …

How is SIADH treated?

SIADH can be cured if the underlying cause is treated. SIADH is often treated with fluid restriction (minimizing your water intake). Medications can limit ADH activity (vasopressin-receptor antagonists) or encourage water excretion (diuretics). Short-term treatment of …

Can SIADH be cured?

SIADH will clear when its cause has been treated.

SIADH can have a significant effect on your health, so it is important to treat it.

Carcinoid syndrome describes a set of symptoms caused by a carcinoid tumour that secretes various naturally-occurring chemicals, such as serotonin, histamine and prostaglandins. Symptoms vary, but can include flushing, diarrhoea and wheezing.…

Cushing's syndrome is a rare condition in which the body has too much of the hormone cortisol. This hormone has many important roles in the human body. However, an excess of it can have unwanted effects such as weight gain, high blood pressure (hypertension) and bruising easily.…

Diabetes insipidus (DI) is caused by a chemical imbalance that hinders the body’s ability to control its fluids. It can cause people to become very thirsty and pass large amounts of urine. If left untreated, the condition can cause life-threatening dehydration.…

Diabetic ketoacidosis (DKA) is a life-threatening condition caused by a build-up of waste products called ketones in the blood. It occurs in people with diabetes when they have no – or very low levels of – insulin. DKA is most commonly seen in people with type 1 diabetes.…