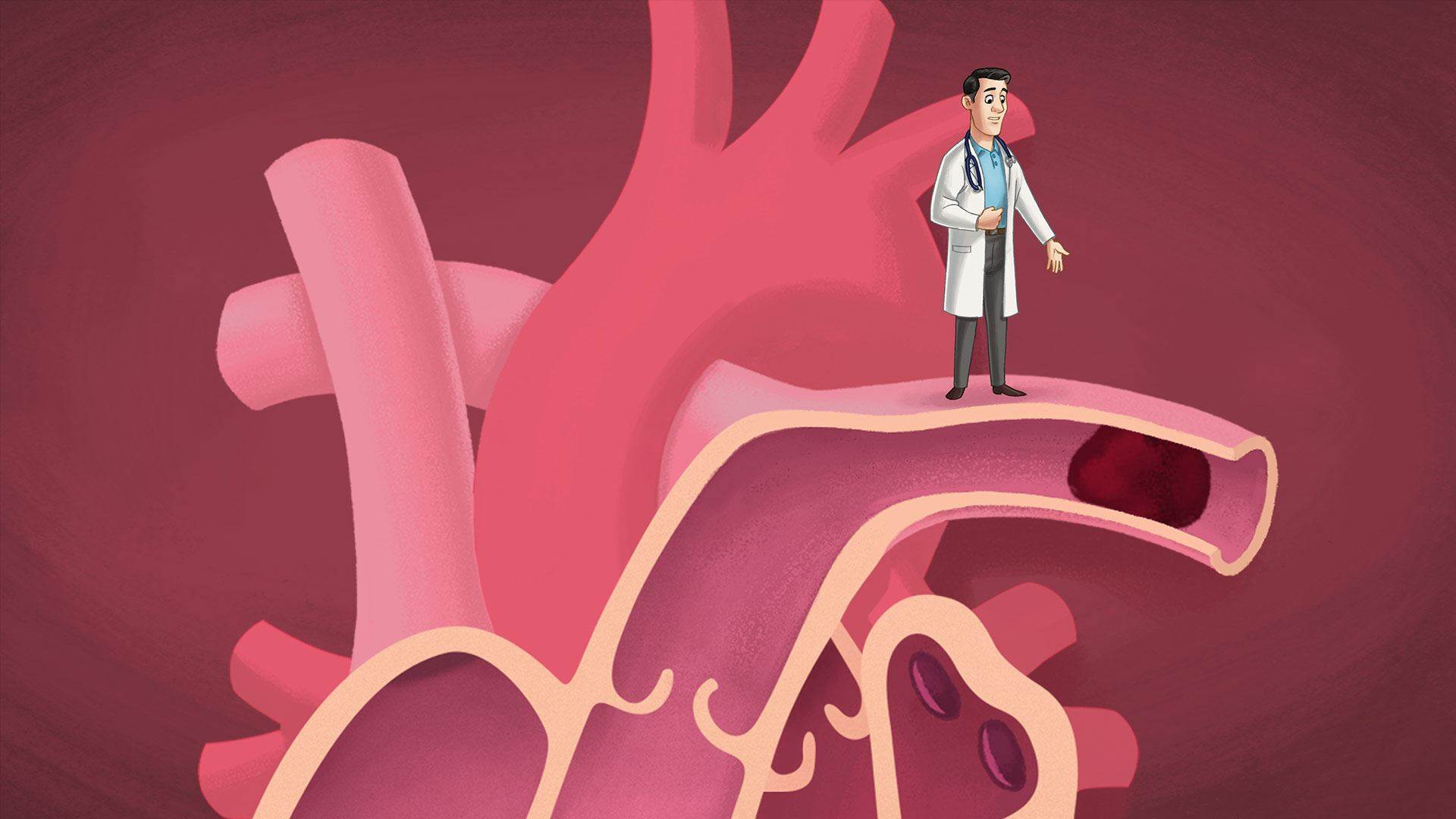 What is a pulmonary embolism?

Pulmonary embolism occurs when a clot that has travelled from another part of the body blocks the blood supply to the lung. It commonly arises from a deep vein thrombosis (DVT).

Pulmonary embolism ultimately damages areas of the lung, causing reduced oxygen levels in the blood that can potentially lead to death. Therefore, it is a serious medical condition that needs prompt medical treatment.

What is an embolism?

Blood clotting is a normal bodily function that helps to prevent bleeding. Normally, blood clots form and then break down in a continuous process. Under certain conditions, the body cannot break them down, which can lead to potentially serious consequences.

A thrombus is a blood clot that partially blocks a blood vessel. An embolus occurs when this thrombus becomes dislodged from where it has formed and travels through the bloodstream until it becomes lodged in a narrower blood vessel.

Pulmonary embolism is not a disease in itself, but is rather a complication from an underlying thrombosis.

Deep vein thrombosis is the most common cause of pulmonary embolism, in which a thrombus that has formed in the legs becomes dislodged and travels through the bloodstream, lodging in the lung. 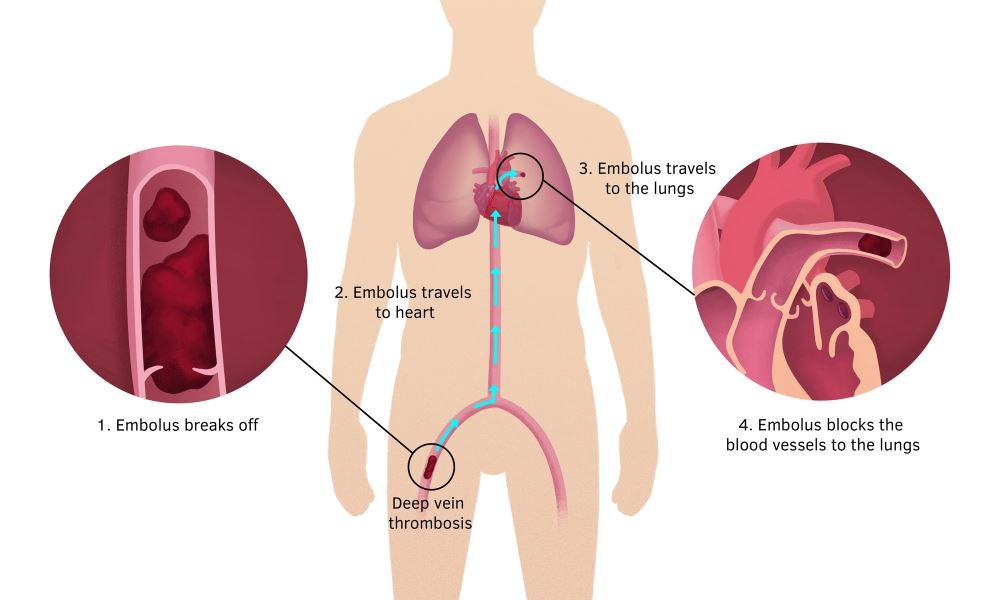 How a pulmonary embolism occurs.

The fluid surrounding and protecting the fetus inside the uterus during pregnancy.

A complete or incomplete break in a bone.

A growth caused by an abnormal and uncontrolled reproduction of cells.

Any surgical procedure that involves an incision to the abdomen.

Pulmonary embolism may not necessarily cause any symptoms. When symptoms do occur, they may vary depending on the size, number and location of the clots and the underlying health of the person's lungs.

Some more typical signs and symptoms may include:

Signs and symptoms of a deep vein thrombosis include:

Diagnosis of pulmonary embolism is based on a person's symptoms, medical history and a range of scans and tests, including:

The procedure in which ultrasound waves are used to create an image of the heart, to allow assessment of the heart's function as it beats.

Energy that is emitted, such as heat, light, or energy in electromagnetic waves. Different types of radiation can be used to diagnose and treat disease.

The main treatment for pulmonary embolism is anticoagulant therapy - medication to stop further blood clots from developing. This type of medication does not break down existing clots, but it does stop an existing clot from getting bigger. The body can then eventually break down the clot.

In some cases, treatment may also involve thrombolytic therapy, which is the removal of the clot, usually using a type of medication. Thrombolytic medication breaks up the blood clot, but has a risk of unwanted bleeding, especially into the brain that could cause a hemorrhagic stroke. Therefore, it is generally given only when the person is seriously unwell from pulmonary embolism.

Another form of treatment may involve the insertion of a filter, via a thin tube, into a large blood vessel that returns blood from the body to the heart, referred to as the inferior vena cava. These filters stop further blood clots from reaching the lungs and are useful when anticoagulant therapy is not suitable. It is removed once there is no longer the risk of further clots.

Some more serious cases of pulmonary embolism may require surgical removal of the embolus from the lung. This is generally reserved for very large clots, or where the person is seriously unwell.

Complications from pulmonary embolism can include:

If pulmonary embolism is treated quickly, most people will make a full recovery. But when there is a large embolus, it may be life-threatening.

What is pulmonary embolism?

Pulmonary embolism is when a blood vessel in the lung becomes blocked by a clot that has originated in another area of the body.

What are the symptoms of pulmonary embolism?

The symptoms of pulmonary embolism vary widely, but can include: shortness of breath; chest pain; coughing up blood; fast heart rate, and; low blood pressure.

Most cases of pulmonary embolism are caused by deep vein thrombosis, in which a blood clot in the leg has dislodged and travelled through the bloodstream to block a vessel in the lung. Other less common causes include an air bubble in a vein, bone and fat …

Who can develop pulmonary embolism?

Pulmonary embolism is more common in people who have been bed-ridden with illness or surgery, in smokers, those with chronic heart conditions or high blood pressure.

How is pulmonary embolism treated?

Treatment for pulmonary embolism typically involves medication to stop further clots from forming and, in some cases, medication to break up existing clots. Some people may also need to have a filter inserted into a blood vessel of their lung, to prevent …

Can pulmonary embolism be prevented?

Because the most common cause of pulmonary embolism is deep vein thrombosis, prevention involves reducing the likelihood of developing deep vein thrombosis. This may include: not smoking; exercising regularly; avoiding lengthy periods of inactivity if …

What is the outlook for pulmonary embolism?

If treated early, the majority of people with pulmonary embolism will make a full recovery. If left untreated, there is a significant risk of death.

If pulmonary embolism is treated quickly, most people will make a full recovery. But when there is a large embolus, it may be life-threatening.

How common is pulmonary embolism?

What can make pulmonary embolism worse?

Pulmonary embolism can be made worse by having an underlying heart or lung condition. For instance, in cases of pulmonary hypertension, where the blood pressure in the lungs and right side of the heart is too high, the heart has to work harder to …

A pneumothorax is the presence of air or gas in the space between the lungs and the inside of the chest cavity, known as the pleural space. When air is forced into this space, there is a loss of negative pressure inside it, which causes the lung on the affected side to collapse.…