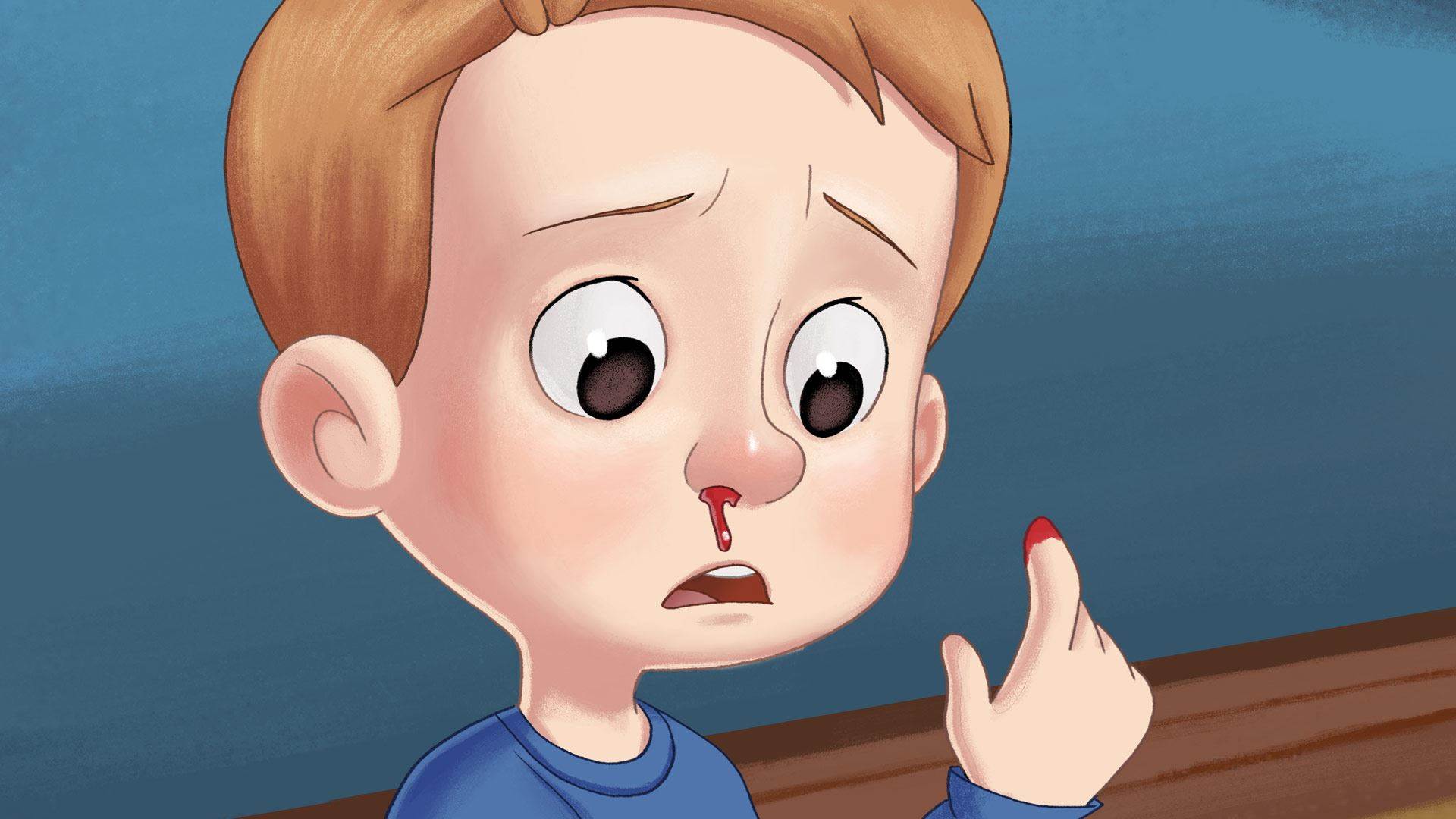 The nose contains numerous blood vessels close to its inner surface. These blood vessels are fragile and can easily be made to bleed.

A nosebleed is the loss of blood from the tissue lining the inside of the nose. Nosebleeds are a common problem; it is estimated that around 60% of people will experience at least one nosebleed in their lifetime. [1] [ 2] Most of the time, the bleeding tends to only last a little while and is usually easy to control.

The most frequent location for a nosebleed is the nasal septum, which is the wall that separates the two sides of the nose. In particular, the majority of nosebleeds occur in a region of the nasal septum where four arteries connect to form Kiesselbach's plexus.

Nosebleeds are most commonly caused by dry air. They are more common during winter months, when heating is used indoors. As dry air passes through the nose, it can irritate the membranes that line the inside of the nose. The irritation can cause crusts to form around the fragile blood vessels. The crusts then cause irritation or itchiness, and when scratched or picked, can cause a nosebleed.

Nosebleeds are normally not serious, but frequent or heavy nosebleeds may indicate a more serious underlying medical condition. Nosebleeds can occur at any age, but younger children (under the age of 10) have more nosebleeds than older children, and adults most susceptible to nosebleeds are those aged 70-79. [3]

Nosebleeds in children can be frightening for both the child and parent, but they normally stop on their own, and can usually be safely managed with home care. However, for older people, nosebleeds may present a more serious threat and may be associated with another underlying condition.

Most episodes of nosebleeds can be well managed with first aid at home, or treatment from a healthcare professional. Surgical intervention is rarely needed. 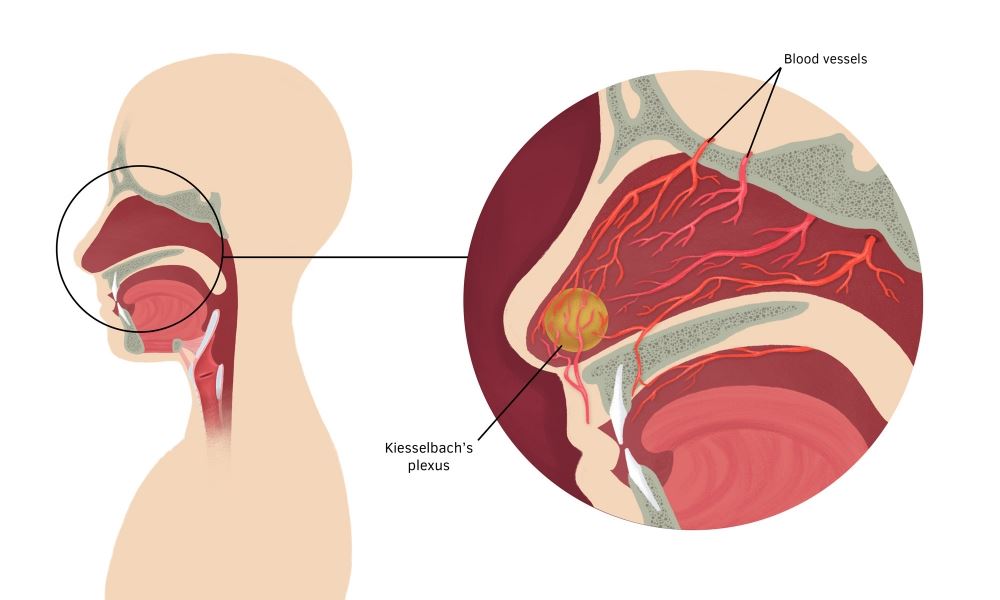 The majority of nosebleeds occur in a region of the nasal septum called Kiesselbach's plexus.

Less commonly, nosebleeds are caused by an underlying condition, such as blood clotting problems caused by taking anticoagulant drugs such as warfarin or aspirin. Liver disease may also cause nosebleeds. Although high blood pressure (hypertension) can contribute to nosebleeds, it does not commonly cause them.

A substance that reduces congestion or swelling in the body, particularly in the nasal cavity.

A rare, inherited blood disorder that leads to individuals being prone to severe (usually internal) bleeding.

A deficiency of platelets in the blood, which causes bleeding into the tissues, bruising, and slow blood-clotting after injury.

Nosebleeds can be classified as anterior or posterior, based on the location of the vessel that bleeds.

Bleeding is from a blood vessel at the front part of the nose. Anterior nosebleeds comprise around 90% of all nosebleeds, but are generally easy to control.

Bleeding is from an artery in the back part of the nose. These nosebleeds are much less common. They tend to occur in elderly people, are generally more complicated and may require hospital admission.

Nosebleeds typically only occur in one nostril, except in cases where there is heavy bleeding that fills up the nostril on the affected side, which then overflows in the back of the nose and flows out of the other nostril.

Some of the symptoms that may accompany a nosebleed include:

Most mild anterior nosebleeds in healthy people can be self-diagnosed and treated at home. Recurrent or heavy nosebleeds and those that are accompanied by other symptoms may need further treatment from a healthcare professional.

Your doctor may take a detailed medical history to assess:

Your doctor may examine the nose, and nasendoscopy can be used to examine the surfaces of the inside of the nose to identify the origin of the nosebleed. A posterior nosebleed is usually diagnosed when the bleeding is heavy and cannot be controlled using routine measures.

In some cases, diagnostic tests may be used to measure the rate at which the blood clots to assess if there is an underlying bleeding disorder. Some patients may have a computerized tomography (CT) scan carried out to closely examine their nose and sinuses to identify the source of the nosebleed. When the bleeding has been heavy, a full blood count test may be ordered to assess the degree of blood loss.

A technique used for investigating the nasal passages. A thin, flexible telescope is inserted into the nose so that the doctor can examine inside the nose and upper airways.

For healthy people, nosebleeds involving a small amount of blood that are not caused by head trauma can generally be treated at home using first aid.

To stop a nosebleed at home:

Once the nosebleed has stopped:

Seek medical attention if the nosebleed fails to respond to basic first aid measures, or for a nosebleed associated with:

The blood-clotting process may be sped up by spraying the inside of the nose with co-phenylcaine, a medication containing an anesthetic and vasoconstrictor, to help stop bleeding.

Silver nitrate may be used to create a superficial burn to the nasal membrane at the site of the bleeding vessel. Topical anesthetic is first applied around the bleeding site inside the nose, and an application wand tipped in silver nitrate is rolled across the affected area. Although only minimally invasive, this procedure is not as effective as electrocauterisation (see below).

This involves inserting a tampon-like device into the nose to apply constant pressure across the source of bleeding. This packing stays in place for up to several days, and works by effectively collapsing the vessels and preventing further nosebleeds.

This involves insertion of a catheter in the groin and up through to the nasal area. The catheter is used to inject material into the blood vessel to cause it to clot and stop bleeding.

Further nosebleed episodes attributed to anticoagulants or NSAIDs can be prevented or reduced by changing the dosage of the medication, or stopping it altogether.

A thin, flexible tube inserted through a narrow opening into a body cavity for removing fluid.

An anesthetic given to a person to put them to sleep while having an operation or medical procedure. Afterwards, the person regains consciousness and usually has no memory of the procedure. A general anesthetic is given in hospital by a specialist called an anesthetist.

The area where the abdomen joins the thighs.

A chemical used in medicine to help stop bleeding.

The prognosis for children with nosebleeds is generally excellent. However, nosebleeds associated with another underlying medical condition may have a more variable prognosis.

Measures you can take to avoid nosebleeds include:

What are the symptoms of nosebleeds?

Nosebleeds typically only occur in one nostril, except in cases where there is heavy bleeding that fills up the nostril on the affected side, which then overflows within the back of the nose. Some of the symptoms that may accompany a nosebleed include …

Because there are many fragile blood vessels lining the nasal membrane, the nose is susceptible to bleeding. Some of the more common causes of a simple nosebleed in healthy people include: trauma or injury; hot, dry air passing across the nasal membranes; …

Nosebleeds can potentially affect anyone, but are more common in children under the age of 10, and adults aged between 45-65 years.

How are nosebleeds treated?

Simple nosebleeds that are not caused by head trauma and that occur in otherwise healthy people can usually be treated using first aid measures. Other medical measures include: nasal spray - spraying the inside of the nose with co-phenylcaine to speed up …

What can be done at home to treat nosebleeds?

First aid for simple nosebleeds includes: pinching the soft portion of the nose, below the bridge of the nose, for 10 minutes; leaning forward slightly to prevent any blood from entering the back of the throat, and; applying ice to the bridge …

Can nosebleeds be prevented?

Are there different types of nosebleeds?

Nosebleeds can either stem from anterior blood vessels, or an artery in the posterior part of the nose. About 90% of nosebleeds are anterior nosebleeds.

What is the outcome for nosebleeds?

Anterior nosebleeds generally have an excellent outcome, whereas nosebleeds associated with another underlying medical condition and which stem from arteries in the posterior part of the nose can have more variable outcomes.

What increases the chances of developing nosebleeds?

You have a greater chance of having nosebleeds if you: live in a hot and dry climate, which dries out nasal membranes; have a deviated septum; have a cold or suffer from allergies; are exposed to chemical irritants such as cigarette …

How common are nosebleeds?

Nosebleeds are very common. Around 60% of people will have at least one episode in their lifetime.

Vaginal bleeding can happen at any stage of pregnancy. While it can be worrying, most women who experience vaginal bleeding during their pregnancy go on to deliver a normal and healthy baby.…