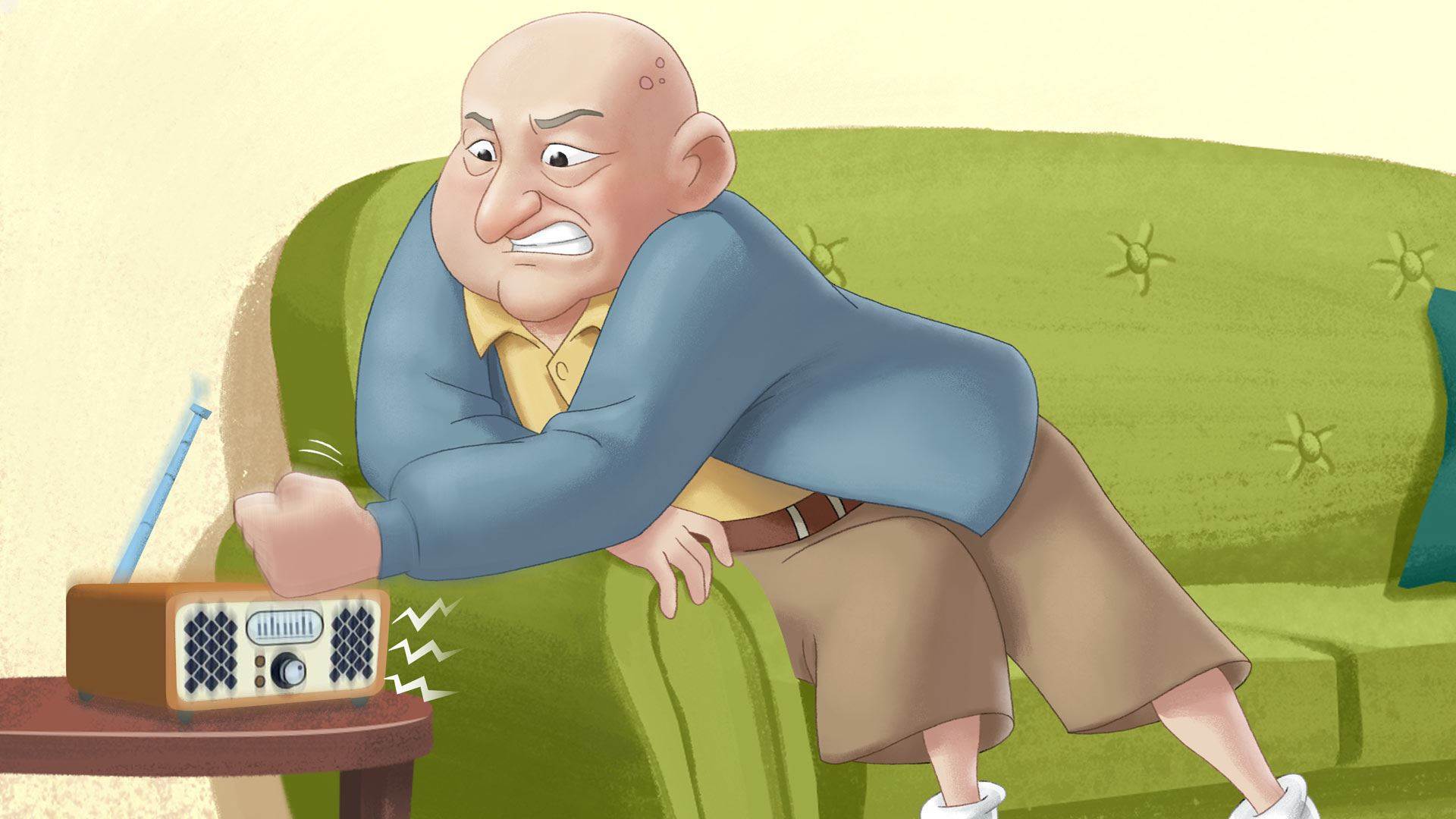 What is hearing loss?

Hearing loss is the partial or complete loss of hearing in one or both ears. It can occur suddenly in some cases, but typically tends to develop gradually. Hearing loss can be classified as:

Sound is measured in units called decibels (dB). Sounds below 75dB are not likely to cause damage that may contribute to hearing loss. However, as the sound increases above 75dB, the risk of it contributing to hearing loss also increases. The risk of developing hearing loss relates to the volume of noise and length of exposure.

As a general guide, if you need to raise your voice in an environment in order to be heard, then it is potentially noisy enough to cause damage to your hearing. Noise exposure accumulates over a lifetime and every exposure to loud noise contributes to the development of hearing loss.

Hearing loss tends to be more common among the elderly, who may have accumulated damage over their lifetime. It is estimated that up to one in three people over 65 years of age are affected by hearing loss.

As exposure to excessive loud noise can cause hearing loss, the increased usage of loud personal stereo systems may be causing an increased incidence of hearing loss in the younger population.

Some typical examples of noises and their corresponding decibel levels include:

How does hearing work? 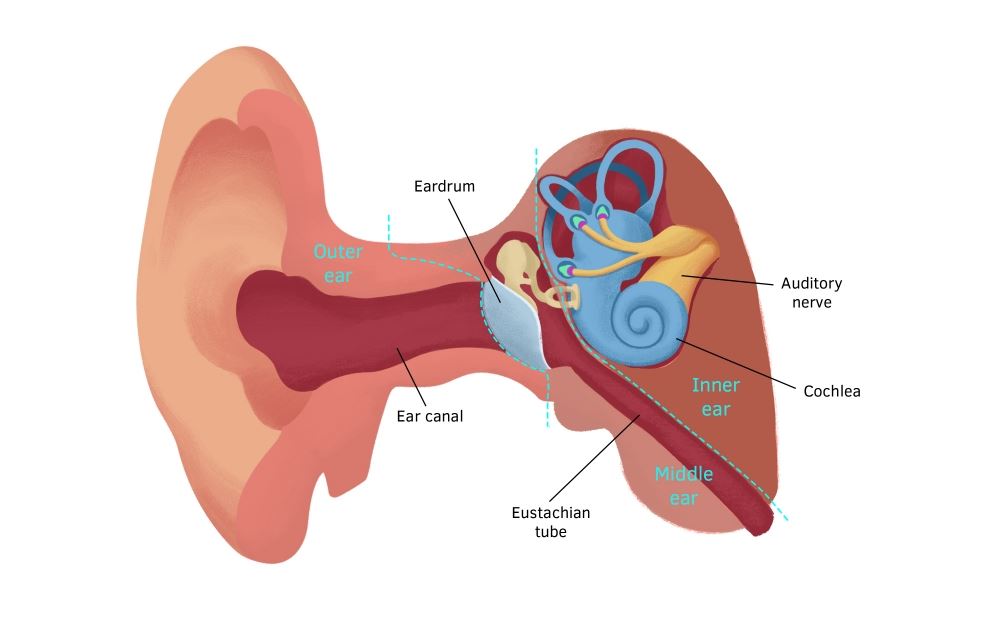 The anatomy of an ear.

Three very small bones that form a chain just behind the eardrum, which transmits sound from the outer to the inner ear.

The outer ear is made up of the external ear and external auditory canal. Hearing loss caused by changes to the outer ear can include earwax or an outer ear infection.

The inner ear is made up of the cochlea and the balance organs. Some changes within the inner ear may be caused by:

The canal between the outer ear and the eardrum.

Three very small bones that form a chain just behind the eardrum, which transmits sound from the outer to the inner ear.

Risk factors that may increase the likelihood of developing hearing loss may include:

Symptoms of hearing loss in adults may include:

Depending on the cause, other symptoms may include:

Signs of hearing loss in a baby include:

Signs of hearing loss in a child may include:

A detailed physical examination is conducted, giving particular attention to the ear. Your doctor may use an instrument called an otoscope to look into the ear for:

An audiologist (a healthcare professional specializing in hearing and balance disorders) may use an audiometer to formally assess your hearing and identify the severity of hearing loss. During this testing, the audiometer produces different sounds at various frequencies and volumes and you listen to these sounds through headphones and respond when you hear them by pressing a button. There are other hearing tests that can be performed based upon the patients age and language skills.

If a tumor or fracture is suspected, the diagnosis may also include imaging such as computerized tomography (CT) scans or magnetic resonance imaging (MRI).

The treatment for hearing loss will vary widely, depending on its underlying cause and severity. Some of the more typical treatments may include:

Some other devices or systems that may also prove beneficial for people with hearing loss include:

When talking with someone with hearing loss, it may be helpful to:

Hearing loss can significantly affect quality of life. Complications may vary depending on the cause and severity of the hearing loss, but some common problems include:

Most cases of hearing loss show improvement once the underlying cause is identified and treated. However, since the most common cause is ageing, hearing loss can often be a progressive condition. In some people, effective devices and aids can offer a much improved quality of life.

What is hearing loss?

Hearing loss is the partial or total inability to hear in one or both ears.

What are the symptoms of hearing loss?

The most common cause of hearing loss is the normal ageing process. Other typical causes may include infection, congenital disorders, trauma and a build-up of earwax.

Who gets hearing loss?

Hearing loss is most common in the older population, but it can potentially affect anyone.

How is hearing loss diagnosed?

Diagnosis is made with a physical examination and hearing tests. In some cases, imaging scans may be used if there is a suspected fracture or tumor.

How is hearing loss treated?

The treatment used will vary depending on the cause of hearing loss, but may include: medication to treat any underlying infection and inflammation; surgery to prevent chronic recurrent infection; surgical cochlear implantation, and; hearing aids.

Can hearing loss be prevented?

Most cases of hearing loss can be prevented by: limiting exposure to excessive noise; maintaining good ear hygiene; keeping childhood vaccinations up to date, and; getting early treatment for ear infections.

Are there different types of hearing loss?

What increases the chances of developing hearing loss?

How common is hearing loss?

Hearing loss has been estimated to affect around 5% of the population, but is more common in the older population and may affect around one third of adults over 60 years of age.

Meniere's disease is a condition of the inner ear that causes attacks of dizziness, loss of balance, ringing and hearing loss. It's thought that a build-up of fluid in the inner ear causes the pressure to rise, disrupting the hearing and balance signals from the inner ear to the brain.…