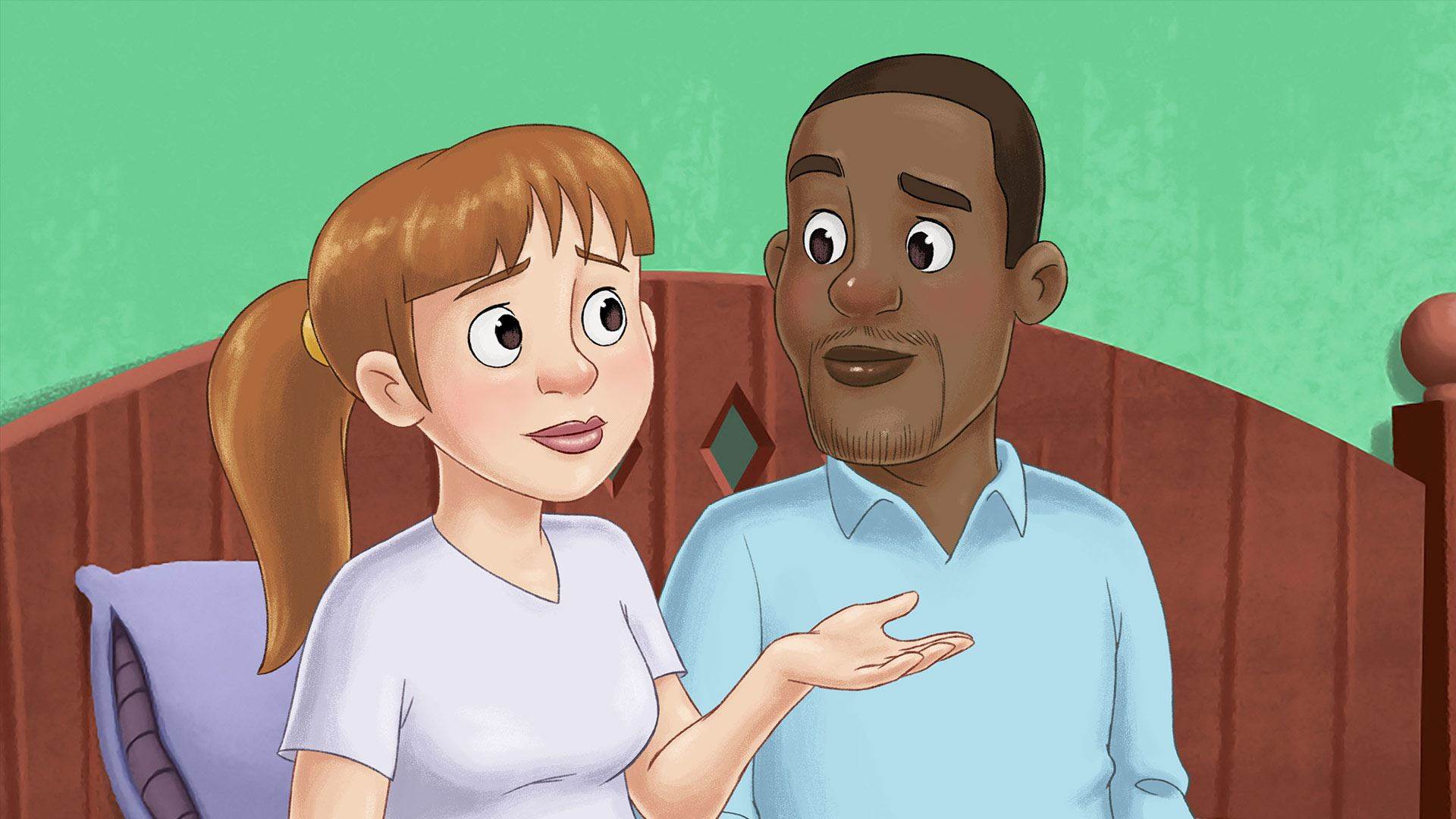 What is a vasectomy?

A vasectomy is a form of permanent contraception for men. It is a simple surgical procedure that involves cutting the tubes that carry sperm from the testicles to the penis. Having a vasectomy does not affect a man's sex drive (libido), or the pleasure experienced during sex.

After a vasectomy, a man's testicles will carry on producing sperm as usual, but the sperm are reabsorbed by the body (as happens naturally to any unused sperm in the body of all males). 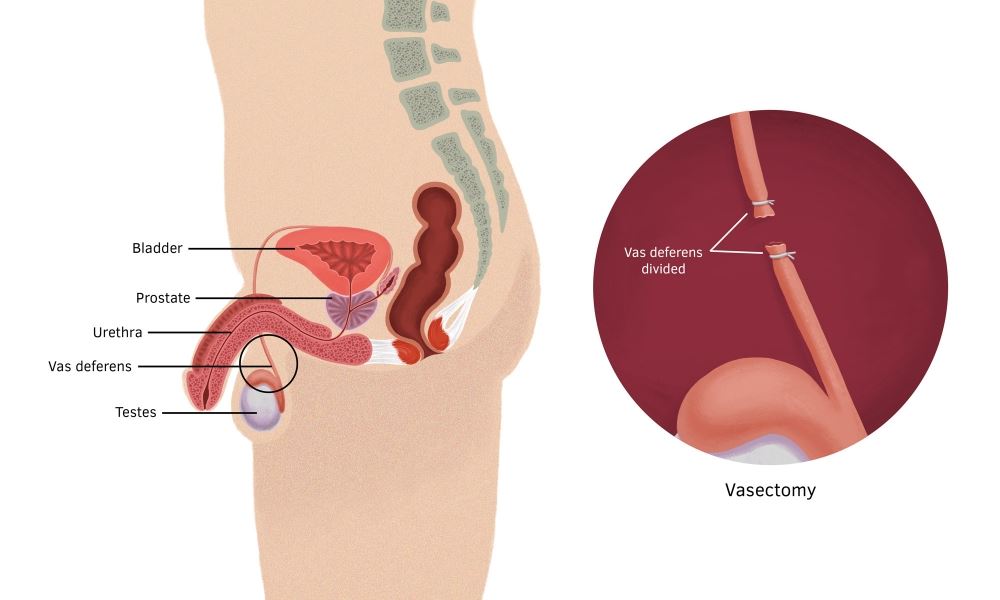 In a vasectomy the vas deferens is cut to prevent sperm being released during ejaculation.

Reasons for having a vasectomy

A vasectomy should only be considered by people who are certain that they do not want to have any children in the future. Although a vasectomy can be reversed, it is designed to be permanent, so not all vasectomy reversals are successful.

For couples considering permanent contraception, a vasectomy is usually recommended above the surgical options available for women (which include tubal ligation and tubal occlusion), because it is less invasive and carries a much lower risk of complications.

A series of tiny tubes attached to the back of each testicle that stores sperm until it is ready to be released.

What happens during a vasectomy?

A vasectomy generally takes less than 30 minutes. First, a local anesthetic is injected with a fine needle to numb the area around the groin. In some cases a vasectomy may be performed under a general anesthetic. Once the area is numb, your doctor will locate the vas deferens by feeling through the skin of the scrotum.

The procedure is then completed in a few short steps:

An anesthetic given to a person to put them to sleep while having an operation or medical procedure. Afterwards, the person regains consciousness and usually has no memory of the procedure. A general anesthetic is given in hospital by a specialist called an anesthetist.

A type of medication that, when administered to an area, creates a localized loss of sensation by blocking nerve activity.

The pouch of skin that contains the testicles; relating to the scrotum.

The area where the abdomen joins the thighs.

What happens after a vasectomy?

Men can usually go home immediately after a vasectomy. After the procedure, it is best to rest for a few days and avoid sex, heavy lifting and strenuous physical activity.

Some men may experience temporary bruising, discomfort or tenderness following the operation. Any pain may be relieved by over-the-counter medication, such as acetaminophen. Check with your doctor if you are unsure which pain-relief medication to take, or if you experience severe pain after the procedure.

The success rates of vasectomy as a contraceptive method are very high, but there is still a small (less than one in 1000) chance of pregnancy occurring after a vasectomy.

To confirm whether a vasectomy has been successful, men will need to have a semen analysis. This is usually performed six weeks to three months after the initial operation. By this time, any sperm should be naturally cleared by the body. Until analysis confirms there are no sperm present in the semen, an alternative method of contraception should be used to avoid pregnancy.

A vasectomy does not offer protection against sexually-transmitted infections (STIs). So it is important to practice safe sex even after a vasectomy. This generally means using a form of barrier contraception, such as a condom, when having sex.

An evaluation of semen characteristics that have implications on male fertility, such as sperm count and motility.

A vasectomy is a relatively straightforward procedure. However, as with other operations, there are several potential complications, including:

What is a vasectomy?

A vasectomy is a surgical procedure that provides permanent contraception for men. It is a quick operation that is usually performed under a local anesthetic to numb the area around the groin. It involves cutting the tubes that carry sperm from the testicles to the …

When is it safe to have sex after a vasectomy?

Some men may experience bruising, discomfort or tenderness following a vasectomy, so it is best to avoid sex for a few days. Men will need to have a semen analysis to make sure that the procedure was successful. Until analysis confirms that …

Can a vasectomy be reversed?

There are vasectomy reversal procedures available. However, vasectomy reversals are not always successful. A vasectomy is designed to be a permanent method of contraception and should not be considered by people if there is a chance they would like to have …

How long does it take to recover after a vasectomy?

Men can usually go home straight after a vasectomy procedure. After the operation, it is best to rest for a few days and avoid heavy lifting and strenuous physical activity. Some men may experience bruising, discomfort or tenderness for …

Is a vasectomy always successful?

a vasectomy is not always successful, but the success rates are very high. The chances of pregnancy occurring after a vasectomy are less than one in 1000.

Will a vasectomy affect my sex drive?

A vasectomy does not affect a man's sex drive or the pleasure they experience during sex.

Erectile dysfunction, also known as impotence, is when a man has difficulty having an erection. Most men will experience it at some point in their lives and it can be stressful. If it is ongoing or causing problems, there are multiple treatment options available.…

Circumcision is an elective surgical procedure performed on males. It is the practice of removing the foreskin from the penis. Circumcision is generally a safe procedure and complications are rare. It may occasionally be needed for medical reasons, but more commonly performed for cultural or personal reasons.…

Premature ejaculation affects most sexually active men at some point in their lives. It occurs when men are unable to control the timing of ejaculation and it happens sooner than anticipated. This can cause distress to both the affected man and his partner. There are numerous treatments available if it is ongoing.…

Becoming a father isn't just about having children or just being there for them. Fatherhood means taking responsibility for the children in your life. It means providing for your child, protecting them, being a positive role model and teaching your child about the world around them.…