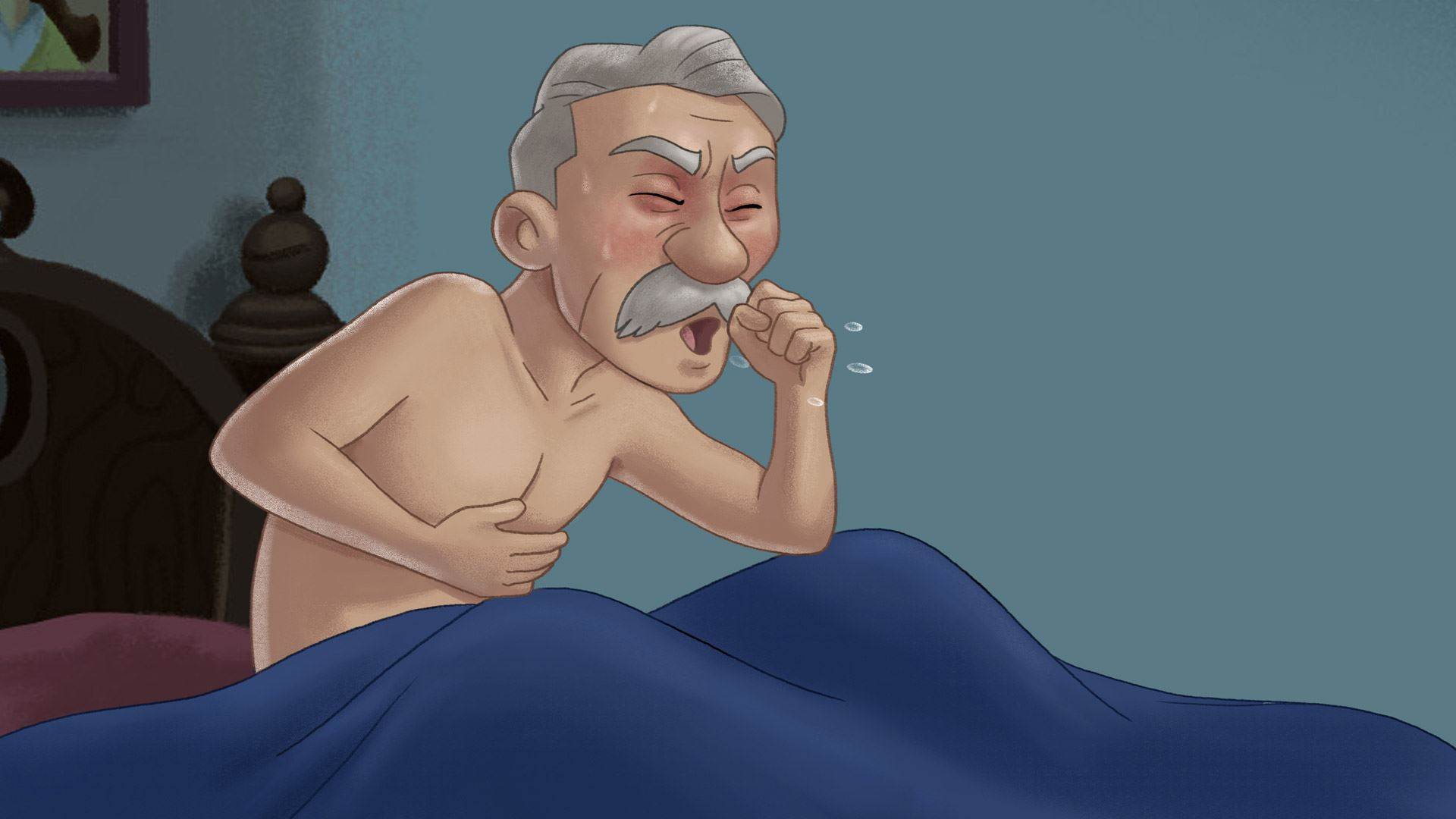 Tuberculosis, often known as TB for short, is an infectious bacterial disease. About one in three people in the world is infected with the TB bacterium, Mycobacterium tuberculosis, but many people will not suffer significant symptoms of the disease. TB is most likely to cause serious illness in people with weakened immune systems. More than 95% of the cases of serious TB illness and death are found in developing countries. [1]

TB is a major global health concern. It has plagued humanity for thousands of years. Signs of TB infection have been found in Ancient Egyptian mummies, and the disease is known to have been common in ancient Greece and the Roman Empire. In the 20th century, effective treatments for TB, as well as a vaccine, were introduced and the incidence of TB fell dramatically. However, the TB bacterium has shown a remarkable ability to both evade the immune system and develop resistance to anti-TB medications. As a result, TB rates rose during the 1980s and 1990s.

In recent years, improved medication and treatment has seen the number of people experiencing illness and death from TB slowly dropping. However, TB is still a major public health concern, with two billion people infected with the bacteria, millions of active cases and over a million deaths each year. [1]

The cause of TB is the bacterium Mycobacterium tuberculosis. When an infected person sneezes or coughs, the bacteria are sprayed into the air. If any bacteria then enter your nose or mouth, you may become infected. TB usually does not pass from person to person through personal items (blankets, toothbrushes, clothes, etc.) You are much more likely to be infected by a person with active TB than by someone with latent TB.

While anyone can be infected with tuberculosis, the body's immune system normally keeps the bacteria in check. However, TB bacteria are notoriously hard to get rid of completely. The bacteria settle in the throat and lungs, where they employ a variety of immune system evasion mechanisms. This allows them to remain hidden within the body's own cells for long periods of time, forming small round bodies known as tubercles in the lung. 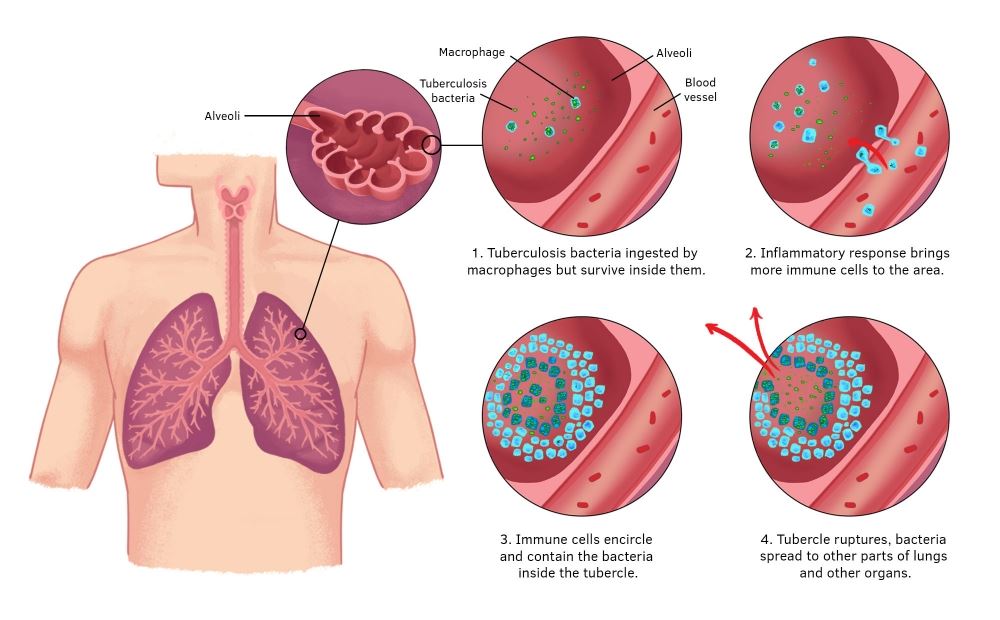 Tuberculosis bacteria infect the alveoli of the lungs.

Of the people infected with TB bacteria, more than 90% are not ill and show no symptoms of disease. [2] The risk of active disease breaking out is higher in people whose immune system is weakened or less able to resist the TB bacteria. These may include:

A virus transmitted mainly by sexual or blood-to-blood contact, that infects cells of the immune system. It is the causative agent of acquired immune deficiency syndrome (AIDS).

TB normally stays in an inactive, 'latent' state inside the body. In that state, the infected person will feel no symptoms. If TB becomes active, symptoms can include:

The symptoms of TB are not always serious. Some people have only mild symptoms that are very hard to diagnose. These people can carry on infecting others without anyone knowing that something may be wrong. 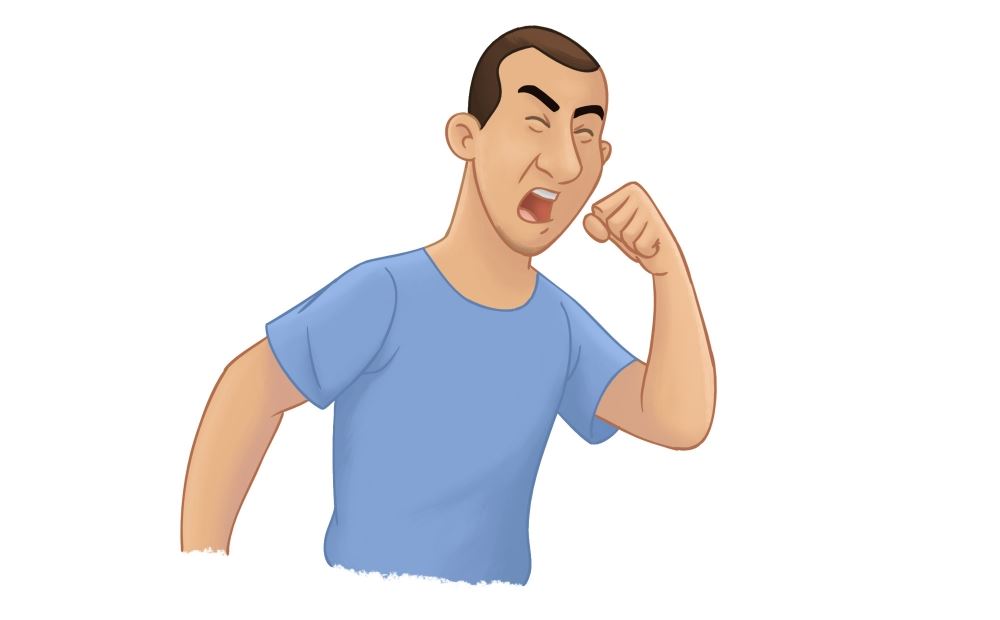 Active TB can cause a persistent cough, chest pain and fever.

Your doctor can diagnose tuberculosis using:

Mucus and possibly pus, bacteria and blood that is coughed up from the airways, typically as a result of an infection.

Tuberculosis is treated with a combination of several (usually four) specific antibiotic medications. Because the bacteria are hard to eradicate, the treatment usually lasts several months. The patient usually stops being infectious to others after about two weeks of treatment.

It is very important to complete the treatment, even if the symptoms stop, because an incomplete treatment will not get rid of all the bacteria. If TB bacteria remain after treatment, the disease can return again and there is also the danger that the bacteria will develop resistance to the medications, also known as 'drug resistance'.

TB is usually a condition of the lungs, but the bacteria can travel from the lungs to other parts of the body and cause disease there (disseminated TB). Some of the more common organs that TB infects include:

Treatment of disseminated TB is similar to treatment of active TB, but can sometimes take a longer time to complete.

For most healthy people infected with TB, the infection does not progress to active disease. The bacteria stay contained within the cells they inhabit and eventually die there and the person is no longer infected.

If an infected person's immune system weakens while TB bacteria are still present, they are at risk of developing active TB. Given good treatment, most people recover from TB and are free of the disease from then on.

For those people in whom TB does not respond well to treatment - whether because it is a drug-resistant strain or for other reasons - there is a significant danger of serious illness and death. TB can also become a chronic illness if the symptoms continue for a long period of time.

TB can be prevented by avoiding contact with infected people. It is spread by close contact with people, especially in crowded environments, such as hospitals, prisons or shelters.

The effects and spread of the disease can be prevented by identifying and treating infected people quickly. It is also important for infected people to take care not to infect others by coughing or sneezing near other people, staying away from crowded environments and sleeping in a separate room.

In most developed countries, isolation procedures and infection control measures are strictly implemented in hospitals for patients with potentially contagious active TB. Isolation is not usually required for people with latent disease.

The TB vaccine (Bacillus Calmette-Guérin vaccine) is given to people at risk, or in countries where TB is common, and can help prevent disease in children. However, it is not very effective in preventing infection in adults.

Tuberculosis (or TB for short) is an infectious disease, usually of the lungs. It is caused by a type of bacterium called Mycobacterium tuberculosis.

What are the symptoms of tuberculosis?

Anyone can catch tuberculosis. People at risk of developing active disease are people with weak immune systems, such as people infected with HIV.

How is tuberculosis diagnosed?

There are several tests for confirming the presence of tuberculosis bacteria in the body, including a skin test, chest X-ray, sputum smear test and blood test.

How is tuberculosis treated?

Tuberculosis is treated with a combination of specific antibiotic drugs. The treatment commonly takes several months to complete.

Can tuberculosis be cured?

If treated correctly, tuberculosis can be completely cured. Some drug-resistant strains of the bacteria can be much more difficult to get rid of than ordinary TB bacteria.

Will tuberculosis clear on its own?

In a healthy person infected with tuberculosis, the body's immune system can keep the tuberculosis bacteria contained and kept at bay until they eventually die off on their own.

What can be done at home to treat tuberculosis?

Tuberculosis is contagious. It is contracted by breathing in the respiratory droplets from an infected person.

How is tuberculosis spread?

Tuberculosis is spread via sneezes and coughs of infected people.

Tuberculosis is a serious condition that requires correct treatment. Untreated, it can lead to serious medical problems and even death.

What increases the chances of developing tuberculosis?

Exposure to people with tuberculosis increases the chances of developing the disease. There are certain areas in the world where tuberculosis is more common. Also, a weakened immune system puts a person exposed to tuberculosis at …

How common is tuberculosis?

About a third of the world's population is infected with the bacteria. Over a million people die each year from tuberculosis.

Cellulitis is a bacterial infection of the skin, usually occurring from a break in the skin, such as a cut, sore, scratch or burn. Skin affected by cellulitis quickly becomes red, swollen, hot and tender. Antibiotics may be needed to clear up the infection.…

Pleurisy is the inflammation of thin membranes lining the lungs and inner chest wall, usually caused by a viral or bacterial infection. As the lungs expand the membranes rub together, causing sharp, stabbing chest pains. Medications are often needed to help treat the condition.…