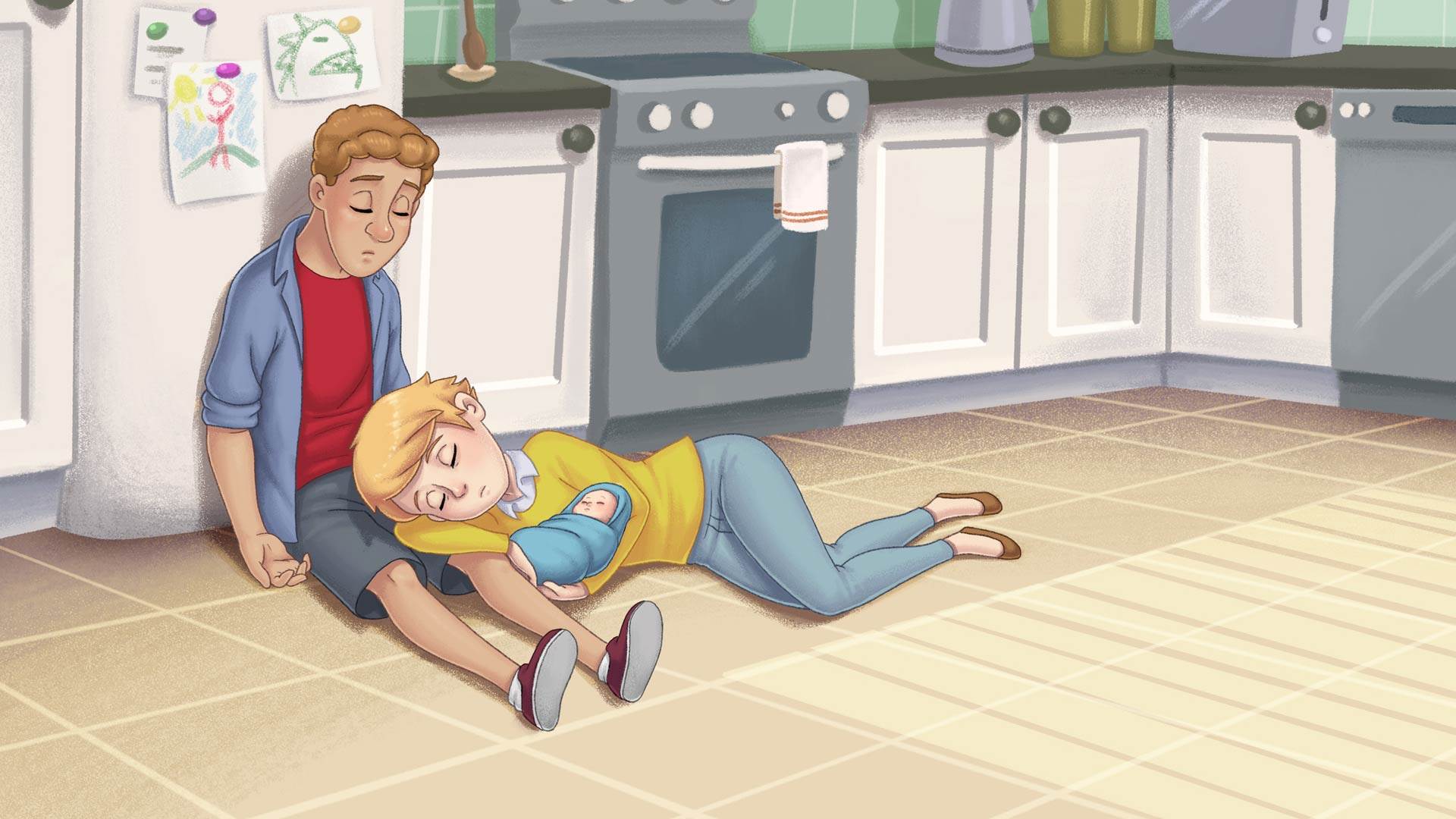 How do newborns sleep?

The first weeks and months after bringing a new baby into the family can be a trying time. The newborn's sleep patterns often play a major part in the difficulties faced by new parents. Parents often find that their sleep schedules are thrown into confusion and are concerned about their newborn and their own sleep.

Newborn sleep patterns come in many forms and can vary widely between babies. A healthy newborn can sleep as little as nine hours a day, or as many as 20; the average is 16-18 hours. There is neither one 'right' pattern, nor is it a competition between babies or families. You will know that your newborn is sleeping enough if they are healthy and active during waking hours.

One large reason why sleep is such an issue in newborns is that newborn sleep patterns are very different to those of their parents. As a parent, it is important to understand that newborns do not sleep in the same way that adults do.

The infant has just arrived into this new, strange world. It is undergoing several processes at once:

Thus, sleep in the newborn is a different activity than it is later in life.

How much will a newborn sleep?

Healthy newborns spend from nine to 20 hours a day in sleep throughout their first three months of life, with an average of 16-18 hours. These numbers drop off gradually as your baby grows. A one-year-old baby will sleep for 12-15 hours on average. [1] [2]

At first, your newborn can sleep anywhere and anytime, day and night. After 10-12 weeks, more mature sleep patterns begin to emerge. During the first three months or so, a baby's biological clock starts attuning itself to day-night cycles. They will wake one to three times a night on average. [1]

What happens during newborn's sleep?

Adults spend about a quarter of their sleep time in REM, or 'active' sleep, which is when we dream. Infants in the first three months of their life have a different pattern. They fall almost immediately into active sleep (REM) - eyes closed but moving, limbs moving and twitching. Breathing is often irregular (periodic) and can stop for up to 20 seconds.

Your newborn spends about half of its sleep time in active sleep. Active sleep is necessary for brain development. During sleep, the newborn brain is busy growing, developing and assimilating the information it has gathered while awake. Experiments show that newborns can even learn new things from their environment during sleep.

Why do newborns wake up so often?

An adult 'sleep cycle' - the transitions between deep and light sleep - normally lasts about 90 minutes. We go through several such cycles every night. Your newborn's sleep cycle, however, lasts for only 45-55 minutes.

A newborn baby's stomach is very small - about the size of a marble at birth. Because of this, even a fully-fed baby cannot hold food to sustain them for more than a few hours. Thus, infants need to wake up every one to three hours in order to feed again.

It is not expected that a young infant will 'sleep through the night'. A baby in its first few months who is a 'good sleeper' is not one who sleeps for six to eight hours at a stretch. Rather, it is a baby who can wake up, feed and return to sleep with minimal fuss.

The good news is that after a few months, your newborn will gradually move into a more mature sleep pattern. Sleep patterns change - often just when you have finally become used to the existing pattern.

Every baby is unique. Different babies will have different sleeping patterns and different rates of development. About one in five babies are considered 'problem sleepers', but there is no set definition.

You may find that your infant is more than three or four months old but:

The field of infancy sleep is hotly debated even between experts, let alone parents. Faced with this debate, it is good to bear in mind that there is no universal 'solution' to infancy sleep problems. Different children may respond differently to methods, even within the same family.

It is also good to bear in mind that having a sleeping problem before six months of age does not indicate that your child will continue to experience sleep problems at a later age.

In order to encourage your baby to move into a more mature sleep pattern, you can try establishing a bedtime routine. This will signal to your baby that sleep time is approaching and prepare them for sleep. Bedtime routines can be started early, or at a later period. Remember that babies can learn, adapt and change as you change your behavior.

Steps you can take include:

'Sleep training' is the name given to several techniques directed at babies who wake up often and cannot go back to sleep by themselves.

The rationale behind this approach is that a parent who rushes to a crying baby's bed is actually reinforcing the baby's unwanted behavior (crying). The parent is not allowing the baby to learn how to 'self-soothe' or 'self-settle' back to sleep without help. Thus, sleep training consists of the parent refraining from comforting a baby who has woken up and is crying.

There are a number of sleep training techniques, including:

Critics of this approach maintain that:

Alternate methods include a variety of approaches aimed at settling a baby to sleep with parental help, comforting and guidance.

Globally, co-sleeping (baby and parent sleep together) is the most common sleeping arrangement in the world. In Western society it is less common, though it has become more popular in recent years.

Advantages of co-sleeping include:

The main disadvantages of co-sleeping are safety concerns (see 'Safety' below) and, for some parents, discomfort and sleep disturbance when sharing a sleeping space with a baby.

During the first six months of life, infants are at particular risk of dying while sleeping. Sudden unexpected infant death (SUID) is a harrowing experience and a constant worry for any parent. SUID can have a number of causes, including:

Overall, about 80% of sudden unexpected infant deaths are eventually categorized as SIDS. [3 ] Researchers believe that SIDS occurs when the brain stem (which is in charge of regulating our breathing, heart rate and sleep) fails to respond well to a temporary lack of oxygen. 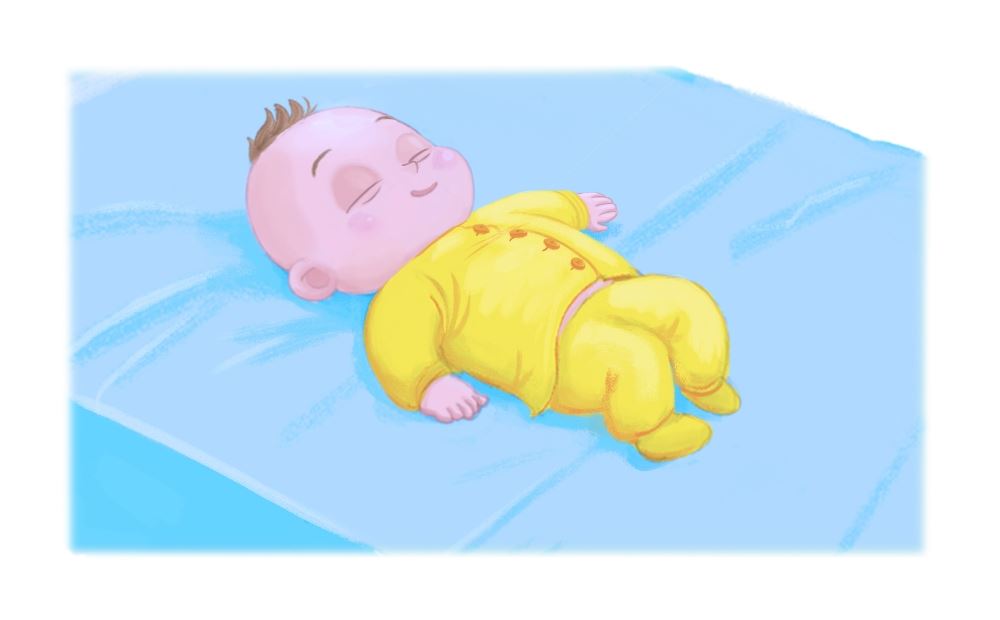 A safe sleeping position for a baby is on its back.

Raising a new baby can be an overwhelming task, both physically and emotionally. It is common for a parent to find themselves exhausted and frustrated when dealing with a baby who will not sleep or stop crying. In some cases, these feelings can cause parents to act irrationally and harm their babies by shaking or hitting them.

In such situations, it is the parent who is, temporarily, the greatest source of danger to the infant. It is therefore important for the parent to recognize when they are nearing such an extreme state of mind and react accordingly. You can try putting the baby down safely and leaving the room for a short while in order to calm down and compose yourself. If possible, seek help from family, friends or a helpline. In situations where you believe your baby is at risk of harm it is important that you seek professional medical help.

The area at the base of the brain that controls many of the body's most fundamental motor, sensory and reflex functions, as well as the facial muscles.

How much do newborns sleep?

Healthy newborns can sleep between 9 and 20 hours a day. An average newborn's sleep is 16 to 18 hours.

Why do newborns sleep so much?

Your infant has just arrived into this new, strange world. It is developing its brain and body at a furious rate, learning new information about its new environment and physically adjusting to the new environment and its rhythms. Sleep is a time for your …

Why do newborns wake up so often?

A newborn baby's stomach is very small - about the size of a marble at birth. Because of this, even a fully-fed baby cannot hold enough food to sustain them for more than a few hours. Thus, infants need to wake up every one to three hours in order to feed …

When will my baby start sleeping through the night?

Infants younger than 3 months are not expected to sleep more than 1 to 3 hours at a stretch before waking to feed. Many babies start sleeping for 6 to 8 hours when they are older than 6 months. For some babies, it might take longer than …

Why does my newborn sleep during the day?

Young infants are still adjusting to the day-night cycle; it takes a while for the rhythm to get established.

What is 'sleep training'?

Sleep training is the name given to a number of techniques directed at babies who wake up often and cannot go back to sleep by themselves. The rationale behind this approach is that a parent who rushes to a crying baby's bed is actually re-enforcing the unwanted …

What is co-sleeping and should I co-sleep?

Globally, co-sleeping (the baby and parent sleeping next to each other) is the most common sleeping arrangement in the world. However, in Western society it is less common, though it has become more popular in recent years. Advantages of …

Will my baby's sleep improve on its own?

The large majority of infants start gradually moving towards more mature sleep patterns at 10 to 12 weeks of age. For some, this will be a longer or more gradual shift than for others.

How can I help my baby settle into a routine of nightly sleep?

To encourage your baby to move into a more mature sleep pattern, you can try establishing a bedtime routine. Bedtime routines can be started early, or at a later period. Steps you can take include encouraging play and activity …

How can I keep my baby safe from sudden infant death syndrome?

During the first 6 months of life, infants are at a particular risk of dying while sleeping. Sudden unexpected infant death (SUID) is a harrowing experience and a constant worry for any parent. Adopting a safe sleep position …

Insomnia is a condition which makes it difficult to fall or stay asleep. Treatment usually depends on identifying the cause. Stress, changes in your sleeping environment, health problems or medications can all disrupt sleep patterns.…

Sudden infant death syndrome (SIDS) is also known as ‘cot death’ and ‘crib death’. SIDS is defined as any death of an infant under one year of age that cannot, after thorough investigation, be explained by a known cause. The loss of a child is a very distressing time for families; however, counselling and support are available.…

A guide to healthy eating in infants

From the moment your baby is born, they no longer receive nutrients through the umbilical cord. They will instead need nutrients initially from milk and then at around six months, also from solid food. It is important for a child to have an appropriate diet for growth and development at every stage of their life.…

Bringing home a new baby is tremendously exciting, but if you have pets, you may need to do a little preparation ahead of time to make sure that the whole family adjusts well to the new arrival. Some people can be fearful about the risk a pet may pose to a small child, but there is no need to panic and, generally, no need to give up your much-cherished pet. Indeed, having pets around can be a wond…