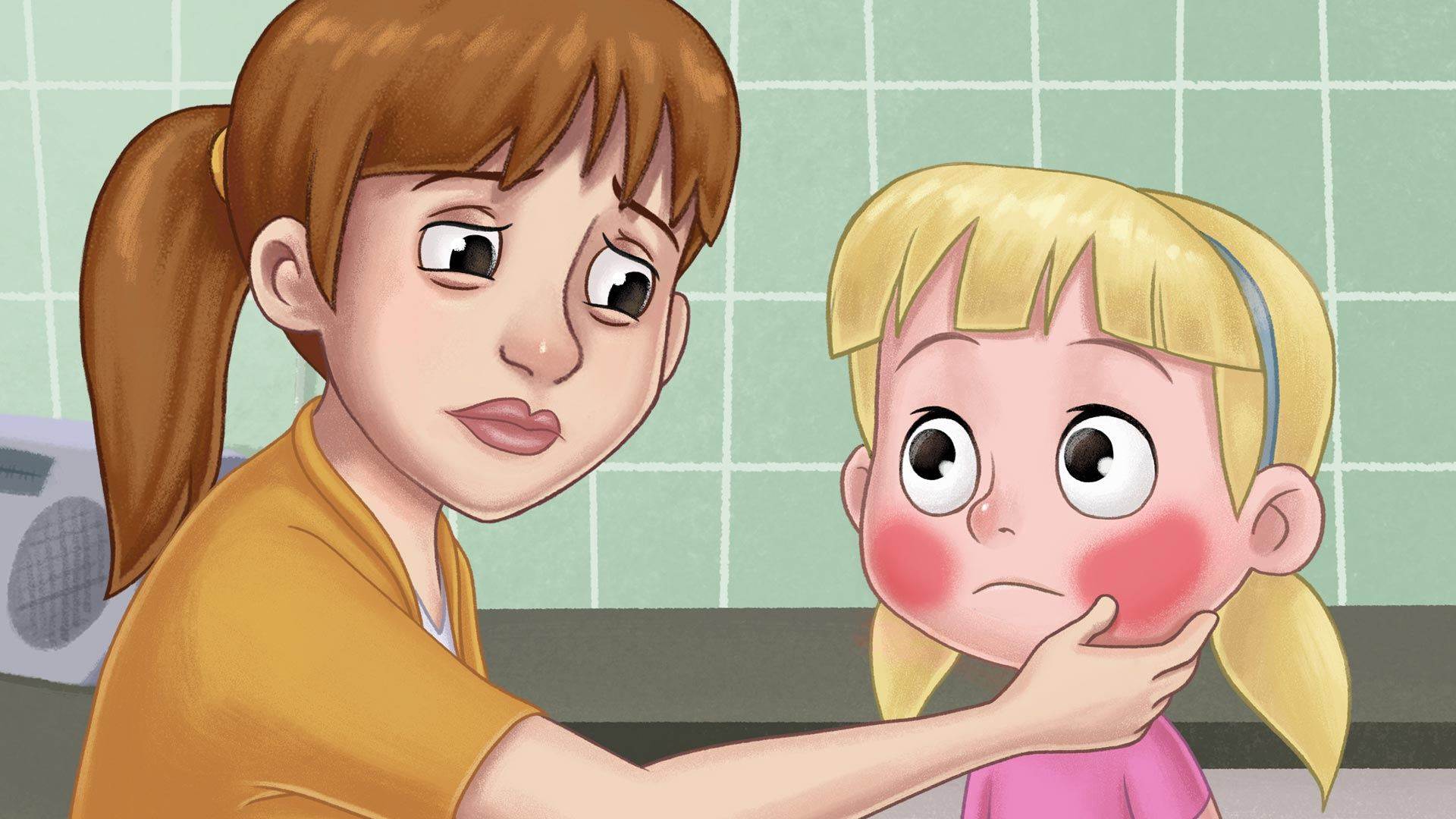 What is slapped cheek disease?

Slapped cheek disease is caused by a virus called erythrovirus, or parvovirus B19. Other viruses of the parvovirus family cause illnesses in animals.

Slapped cheek disease is most commonly passed from person to person via sneezing and coughing. When an infected person sneezes or coughs, the virus spreads via millions of tiny droplets, each containing many viruses that are spread into the air. If a droplet enters your nose or mouth, you may then be infected. The droplets can also collect on surfaces and objects, so you can also catch it by touching an infected surface and then touching your nose or mouth area.

Children are most often infected by other children in child care facilities, school, or at home. Outbreaks of the virus among children tend to occur in colder months.

The virus can also pass between people as a result of blood transfusions or organ transplants, but this is rare. After catching slapped cheek disease once, a person normally develops immunity to it from that point on.

The symptoms of slapped cheek disease usually appear about four to 14 days after infection. Most people infected with the virus have no symptoms at all and may not know they've been infected.

Early symptoms of the disease resemble common cold symptoms. These can include:

A few days after the early symptoms appear, they begin to reduce. At this point, a distinctive red rash usually appears on the cheeks. The strong reddish color makes the cheek look as if it has been slapped, which gives the disease the 'slapped cheek' name. Children are more prone to the rash than adults.

The red color may become more noticeable during exercise, or when exposed to sunlight, wind or heat. The rash often passes after about a week, but in some cases stays for several weeks, or goes away only to appear again.

By the time the rash has appeared, that person is no longer infectious and can be in contact with other people at child care, school or work.

In some cases, the facial rash is followed by a body rash. It usually appears on the arms and legs and sometimes on the chest and back as well. The body rash normally goes away by itself after a week or two. 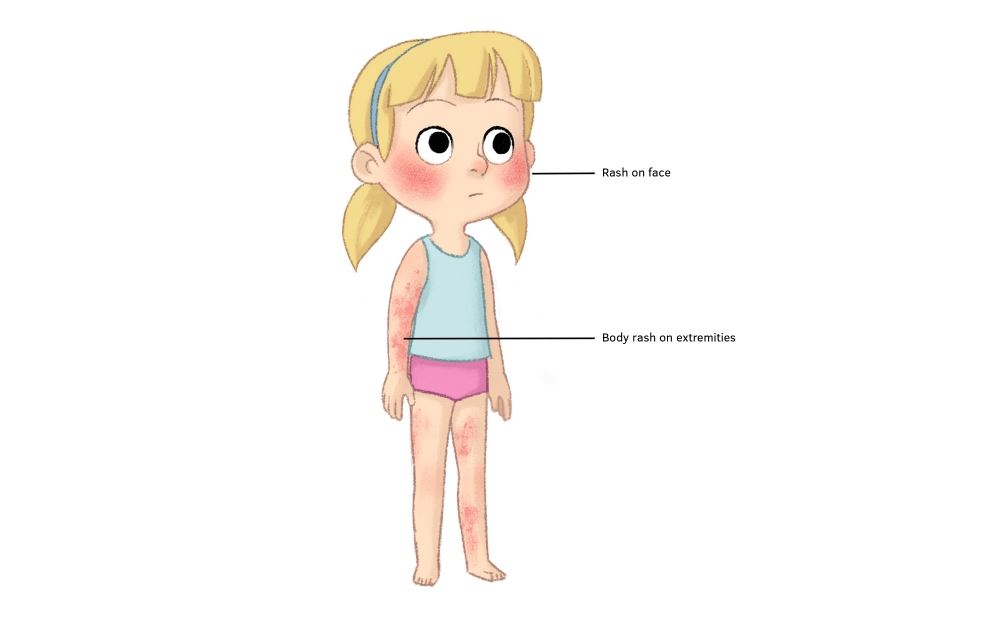 Pain in the joints may appear a few days after the early symptoms. This is more common in adults and older children. The pain normally passes after a few days, but in a few cases may persist for weeks or even months.

Your doctor will usually diagnose slapped cheek disease by its symptoms. If necessary, blood tests for the presence of the virus can be performed.

There is no specific treatment for the slapped cheek disease as antibiotics and existing antiviral medications have no effect on the virus. The disease should clear up on its own within a few weeks.

If symptoms are troublesome, the recommended treatments include:

Slapped cheek disease is normally a mild illness and will go away on its own within two to four weeks. However, some at-risk people may experience complications and will benefit from medical attention.

In people whose immune system is weak as a result of illness, age or medical treatment, the infection may remain in the body for a longer period and continue to cause problems.

In some at-risk people, the erythrovirus can cause problems with the development of red blood cells. This may lead to a shortage in red blood cells in the body (anemia). This can be serious in people with certain blood disorders such as thalassemia or sickle-cell anemia.

If you have been exposed to someone with slapped cheek while you are pregnant, seek advice from your local doctor or obstetrician.

The loss of a pregnancy before 20 weeks.

A hereditary form of anemia in which a defective form of hemoglobin cause red blood cells to be an abnormal crescent shape. This causes the cells to break down prematurely, which can then lead to anemia.

Currently, there are no vaccines against the virus that causes the slapped cheek disease. To prevent catching or passing on the virus, it is advisable to wash your hands frequently, especially before eating or touching the mouth or nose.

What is slapped cheek disease?

Slapped cheek disease, or fifth disease, is a common childhood illness caused by an infection with a virus called erythrovirus, or parvovirus B19.

What are the symptoms of slapped cheek disease?

The symptoms of slapped cheek disease usually appear about four to 14 days after infection. One in five people infected with the virus have no symptoms at all and may not know they've been infected. Early symptoms of fifth disease resemble …

Who gets slapped cheek disease?

Children four to 10 years of age are most commonly affected by slapped cheek disease. However, the disease can also appear in older children, teenagers and adults.

How is slapped cheek disease diagnosed?

Slapped cheek disease is usually diagnosed by its signs, especially the rash. If necessary, blood tests can be done to confirm a diagnosis.

How is slapped cheek disease treated?

There is no specific treatment for the slapped cheek disease.

Will the slapped cheek disease clear up on its own?

Slapped cheek disease will clear up on its own within a few weeks as the virus is cleared from the body.

What can be done at home to treat slapped cheek disease ?

Bed rest, plenty of fluids and, if required, medication against fever or aching, can help relieve symptoms of slapped cheek disease if they're too troublesome.

Slapped cheek disease is very contagious, and many people the world over have been exposed to it.

How is slapped cheek disease spread?

The virus that causes slapped cheek disease is spread via droplets from sneezes and coughs.

Hand, foot and mouth disease is a mild viral illness which resolves itself in a few days. Affecting mainly children, it’s more common in warmer weather. Good personal hygiene and teaching children to cover their coughs and sneezes can help prevent the spread of the virus.…

Rubella is a viral disease which generally causes a mild illness and usually resolves after a few days. However, death or serious birth defects can occur if the virus is contracted during pregnancy. Vaccines exist for children at twelve and eighteen months and also for adults.…

Appendicitis is an infection of the appendix, a tube-shaped sac located at the beginning of the large bowel. Symptoms include abdominal pain, fever and unwellness. Appendicitis can quickly become serious, so if you’re concerned it is important to see a doctor early. It is commonly treated by surgery and recovery is often quick.…

Chickenpox is a common, contagious childhood illness, caused by the varicella virus. It causes a distinctive, itchy rash, and normally resolves on its own. A vaccine is available that can help reduce your chance of getting the condition.…