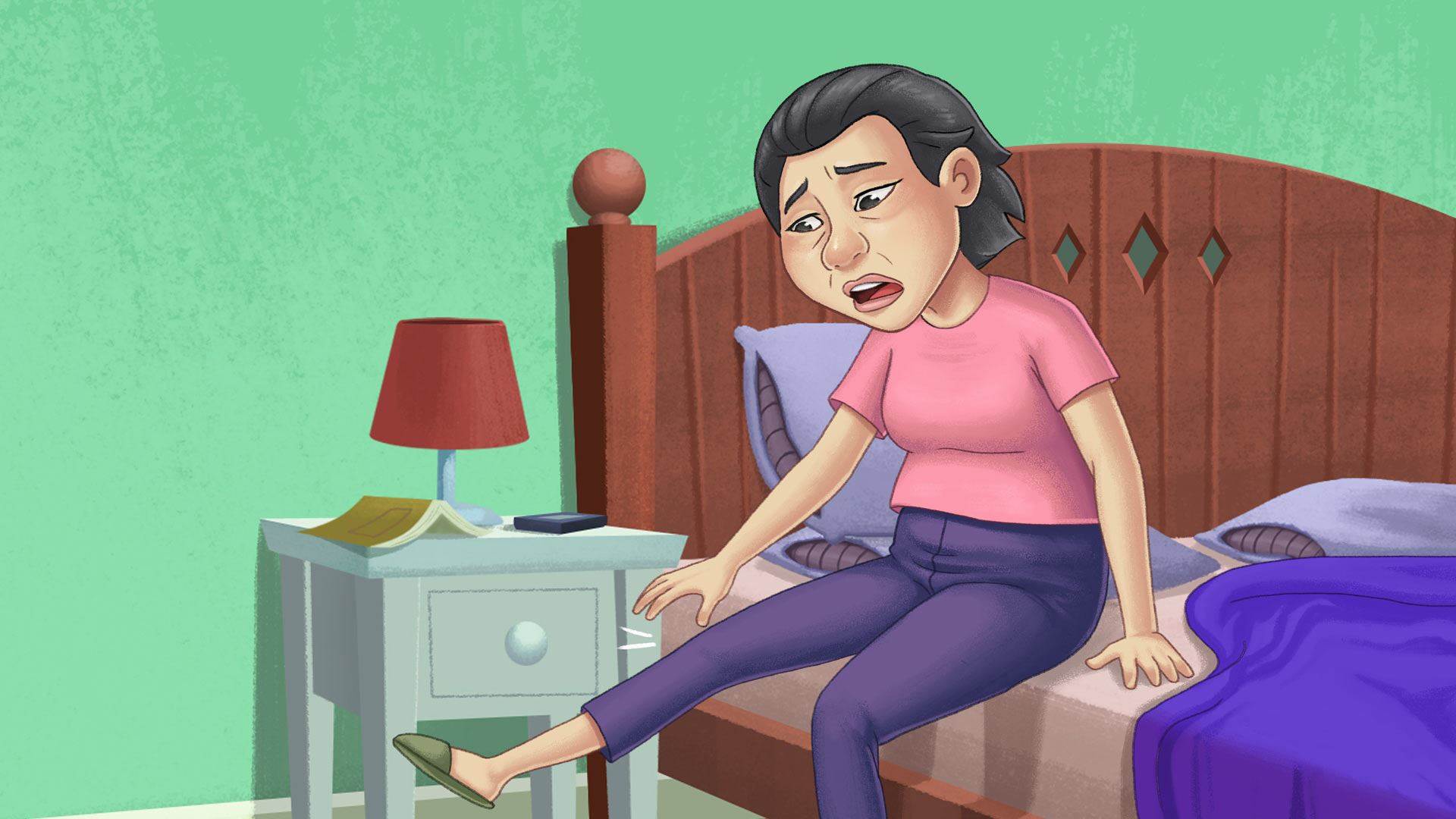 What is septic arthritis?

Septic arthritis is an infection in a joint that can lead to serious pain and permanent damage. It requires immediate medical treatment.

Also known as infectious arthritis, septic arthritis is most commonly caused by bacteria.

The organism that causes septic arthritis can reach the affected joint:

When the joint is infected, pus builds up, causing damage to the structures of the joint.

A bodily fluid that is the result of an inflammatory response at an infection site. Its color can range from whitish to yellow to green, depending on the composition. Pus is mainly composed of dead bacteria, white blood cells and cellular debris.

The nose, sinuses, larynx and trachea parts of the respiratory tract which function to carry air to and from the lungs.

The organs and tubes involved in transporting urine within the body and out of it.

Factors that can increase the risk of developing septic arthritis include:

This is septic arthritis that is caused by organisms other than Neisseria gonorrhoeae. A wide range of organisms can be the cause, but Staphylococcus aureus is the most common.

It is more likely to occur in older people and young children. Knees and hips are the joints most likely to be affected.

This form of septic arthritis is caused by Neisseria gonorrhoeae, the type of bacteria responsible for the sexually-transmitted disease gonorrhea.

It is most common in younger, sexually active people, particularly:

Initially, people with gonococcal septic arthritis tend to experience pain that shifts through the joints such as the knees, ankles, wrists and elbows. Following this:

Most people with gonococcal septic arthritis also develop lesions on the skin of their extremities, particularly the palms of the hands and soles of the feet. These lesions often feature a number of small pustules.

The periodic shedding of the lining of a woman's uterus. Typically occurring about every four weeks between puberty and menopause (except during pregnancy). The menstrual period varies between individuals, but typically lasts 3-5 days.

Symptoms of septic arthritis include pain, heat and swelling in affected joints. The skin over the joint may be red and the pain can be severe. Often, people with septic arthritis also get chills and fever, but this is not always the case.

The knee is the joint most commonly affected, but septic arthritis can also occur in the shoulder, wrist, hip and ankle and, less commonly, in other joints.

Symptoms usually develop within hours. Usually only one joint is affected, but more than one joint can be involved.

X-rays are generally not useful in detecting septic arthritis, but may be recommended to identify other potential causes of pain in the joint. An MRI may be recommended in cases where it is difficult to assess a joint (such as with the hip).

Where gonococcal septic arthritis is suspected, tests to identify Neisseria gonorrhoeae infection in other parts of the body (such as the urethra, rectum, cervix and pharynx) may be recommended. 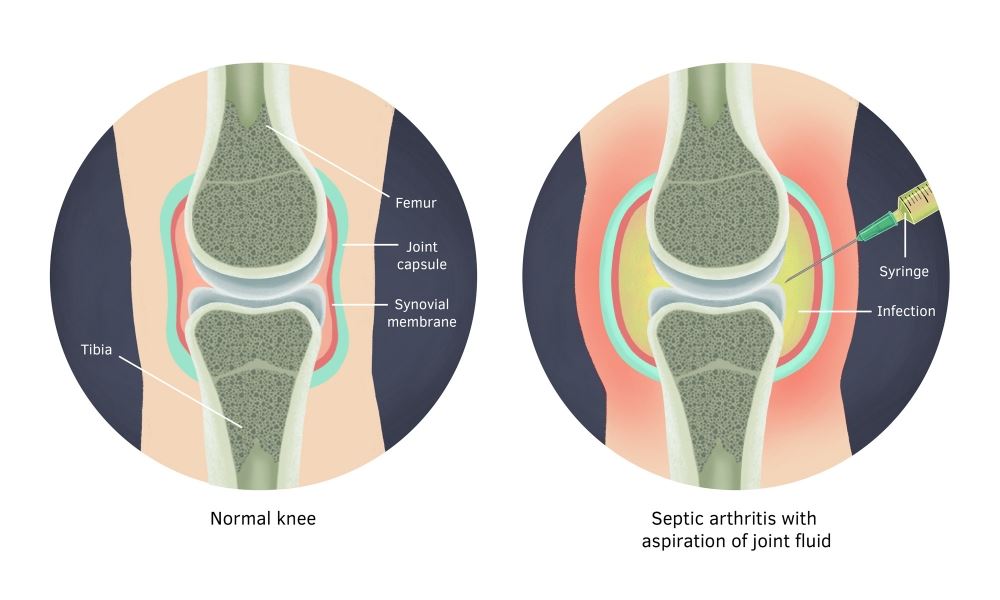 The lower part of the uterus, leading out into the vagina.

The throat cavity behind the nose and mouth, above the esophagus.

Pertaining to the fluid that lubricates joints (called synovia). A joint that produces synovia is referred to as a synovial joint.

The duct through which urine flows from the bladder to outside the body.

A stay in hospital is usually required to treat septic arthritis.

High doses of antibiotics such as vancomyacin or ceftazidime are given intravenously. Treatment is usually started as soon as possible and may begin before the type of bacteria causing the infection is definitively identified.

The choice of antibiotic may depend on many factors. The antibiotic may later be changed to better target the infection once the bacteria is identified.

Once the infection has begun to improve, lower doses of antibiotics taken by mouth may be prescribed to ensure that infection clears completely from the joint.

In the much-less common case of a fungus causing the infection, antifungal medications will be used to treat the infection.

Infections of joints caused by viruses generally resolve over time without treatment. Antibiotics do not help to treat viral infections.

Drainage of the joint

Pus is drained from the joint to reduce damage while the antibiotics are fighting the infection. This may need to be repeated multiple times. Depending on the joint affected, drainage may be done with a needle, an arthroscope or, particularly with hip joints, open surgery may be required.

Infection in an artificial joint

If the infection occurs in an artificial joint, the prostheses may need to be removed in order for the infection to be treated. They can usually be replaced once the infection has settled down.

Pain-relief medications such as non-steroidal anti-inflammatories (NSAIDs, including ibuprofen) can help to reduce symptoms such as pain, inflammation and fever.

For the first few days, the joint may be placed in a splint because any movement of the joint is often very painful. However, splinting is usually only recommended for a short time.

Physiotherapy is very important to preserve function in the affected joint. Initially, exercises that maintain the range of motion of the joint can help recovery. When the infection has subsided, more strenuous exercises to strengthen the muscles around the joint may be recommended.

This form of arthritis usually responds quickly to antibiotics (such as azithromycin and ceftriaxone) given intravenously.

Chemical substances that kill or suppress the growth of bacteria.

An instrument used to view inside a joint and treat joint conditions.

A bodily fluid that is the result of an inflammatory response at an infection site. Its color can range from whitish to yellow to green, depending on the composition. Pus is mainly composed of dead bacteria, white blood cells and cellular debris.

If septic arthritis is not treated promptly, serious and permanent damage can occur to the joint leading to:

Treatment with antibiotics can cause side effects including nausea, vomiting and allergic reactions.

Prognosis depends on the type of organism that has caused the infection and how promptly it is treated.

What is septic arthritis?

Septic arthritis is an infection in a joint. It can lead to serious pain and permanent damage.

What are the symptoms of septic arthritis?

Symptoms of septic arthritis can include severe pain, redness and swelling in affected joints. Many people will also experience chills and fever.

Septic arthritis is caused by infection of the joint, generally by bacteria, although it can be by other organisms such as mycobacteria or fungi. The bacteria may get into the joint because of injury or surgery at or near the joint, but can also travel from …

How is septic arthritis diagnosed?

Septic arthritis is diagnosed by analysis of synovial fluid, withdrawn from the space within the joint by a needle. Blood tests may also be done to detect the presence of bacteria in the bloodstream.

How is septic arthritis treated?

The first treatment for septic arthritis is high doses of antibiotics delivered intravenously. A stay in hospital is usually necessary. In some cases, draining pus from the joint is necessary to help limit damage while the antibiotics are clearing the …

Can septic arthritis be cured?

The infection that causes septic arthritis can usually be treated with antibiotic treatment. However, damage to the joint may be permanent.

Will septic arthritis clear on its own?

Septic arthritis will not clear on its own. Treatment that begins as early as possible is most effective at limiting damage to the joint. Depending on the type of infection causing it, untreated septic arthritis can cause severe damage to a joint …

Are there different types of septic arthritis?

What is the outlook for septic arthritis?

Depending on the organism that causes septic arthritis and how promptly treatment is started, there may be full recovery with no damage to the joint, through to damage that is serious and permanent.

Septic arthritis can be a medical emergency and rapidly cause serious damage to affected joints. Treatment is more effective the sooner it starts.

Gout is an acutely painful condition that usually affects the big toe. It occurs when uric acid crystals form in certain joints, leading to inflammation, pain and swelling. Medications and changes in behaviour can reduce the likelihood of future gout episodes.…

Arthritis refers to inflammation of joints. This can lead to stiffness, swelling and pain and may be due to a joint condition, an infection or an autoimmune condition. Most arthritis is chronic, however adhering to treatment plans and some modification of activities can help maintain an active lifestyle.…

Avascular necrosis describes the death of bone tissue that occurs when the blood supply to an area of bone is cut off. It causes severe damage to the bone and is also known as ischemic bone necrosis, aseptic necrosis, bone infarction and osteonecrosis.…

Bursitis is swelling and irritation of your bursa. Bursa are small sacs filled with synovial fluid that help reduce the friction when tendons or ligaments rub against other structures, such as bones, muscles and skin.…