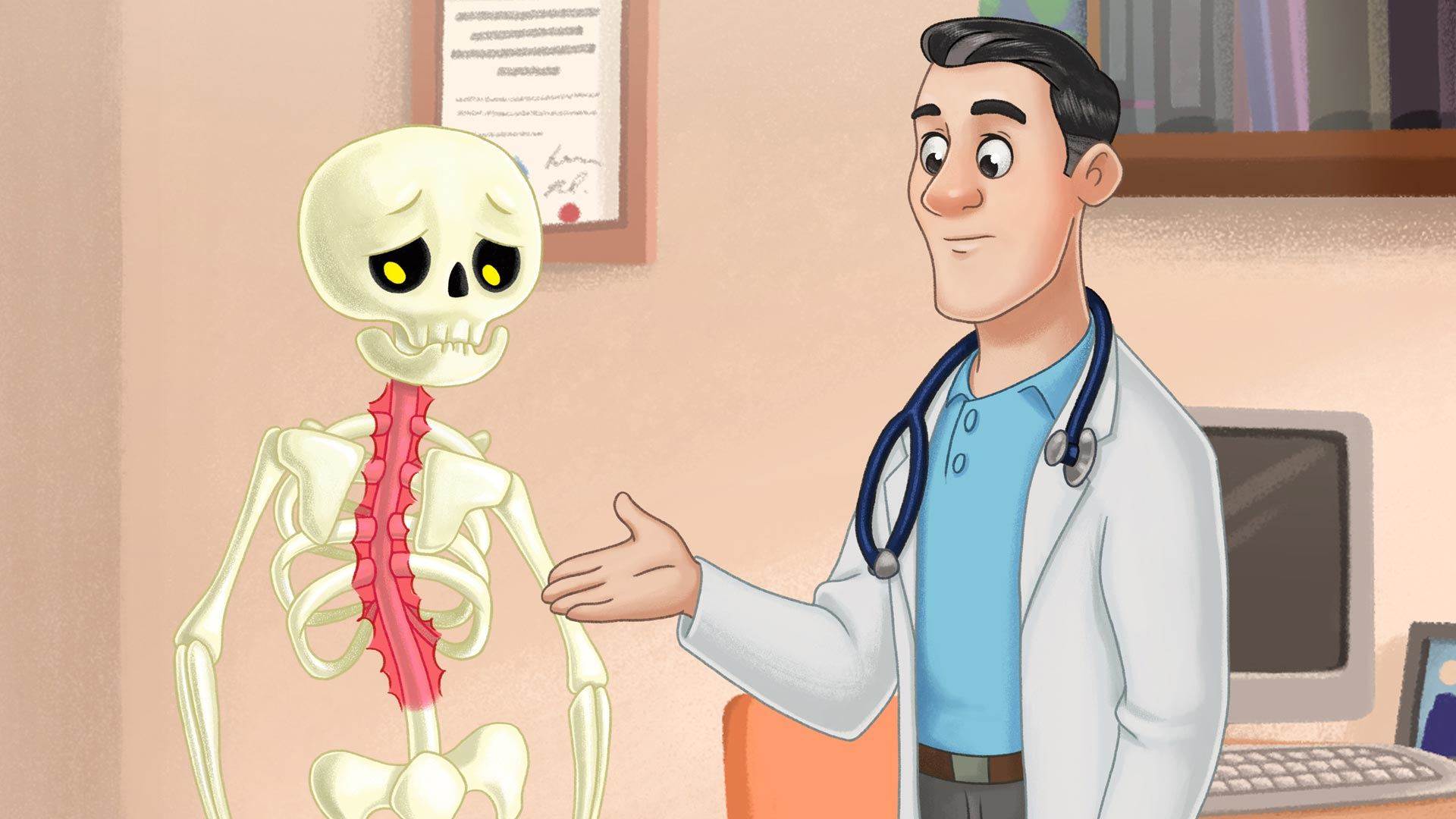 Scoliosis is an abnormal curvature of the spine. It is a common condition affecting about 2-3% of the population to some degree. About 10% of those affected have a minor form of the condition and about one in 1000 people have severe scoliosis. [1]

In most cases, the cause of scoliosis is unknown, but it appears to be hereditary and passed down through generations. In some cases, having legs of different lengths can cause a tilting of the hips and to compensate, your body tilts your shoulders the other way. In some rare cases, neuromuscular conditions, such as cerebral palsy, can cause muscle spasms that alter the alignment of the spine. Birth defects or injuries to the spine can also cause scoliosis.

There are four main types of scoliosis:

Signs and symptoms of scoliosis can vary in degree from mild, moderate to severe. These can include:

To identify scoliosis, the 'forward bend test' can be used. This involves bending forward at the waist while the doctor stands back to diagnose an abnormal curvature of your body or spine. An X-ray of the spine can also be used to demonstrate and assess the severity of the scoliosis. 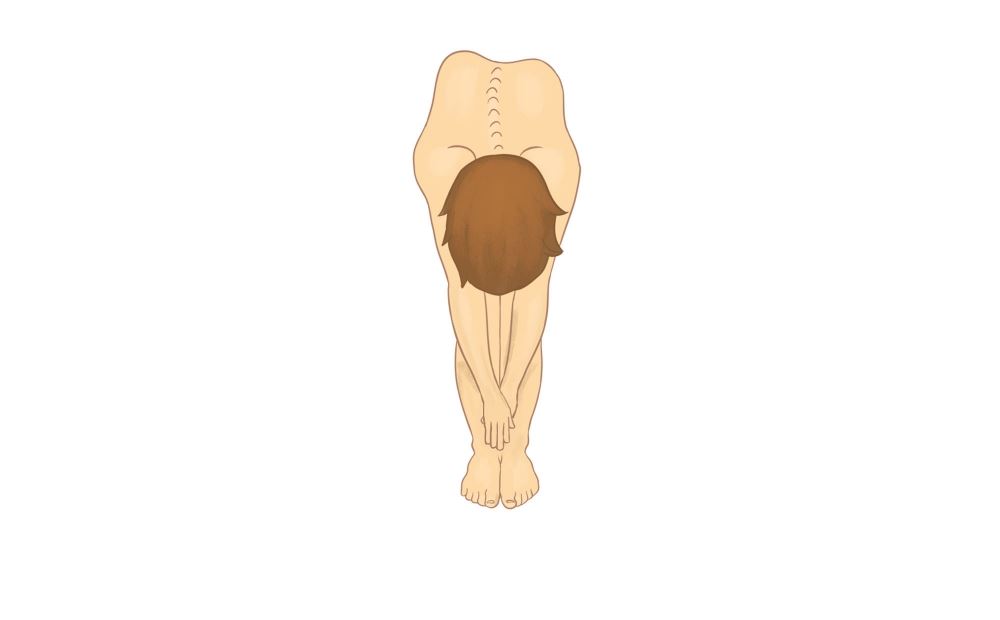 Scoliosis can be identified by the 'forward bend test'.

A custom-made brace to fit under clothing can be used if you have moderate scoliosis. This is commonly used before adolescence and can help to straighten the spine during this period of growth. If most growing has already occurred, a brace can also be used to prevent the curvature from becoming worse.

In more severe cases of scoliosis, surgery may be required. This is performed in a process called spinal fusion and usually done after a child has stopped growing. This involves correcting the curvature then fixing it in place, by joining the vertebrae together using extra bone, often taken from the pelvis. Rods, wires, hooks and screws can also be used to hold the vertebrae stable while they fuse together.

The bones that make up the spinal column.

In most cases, scoliosis is mild and does not require treatment. In more severe cases, complications can occur, which include:

People with scoliosis can experience back pain, which can be persistent and severe in certain cases.

Scoliosis can cause injury to the heart and lungs. This is caused by increased pressure on the rib cage and can lead to breathing difficulties. There is also a risk of pneumonia and other chest infections.

In severe cases, an unfortunate complication can be the visual appearance of the condition. This can lead to social embarrassment, may prevent work opportunities and can impair quality of life.

There can also be problems with pregnancy due to the extra weight of carrying a baby, which puts added strain on the spine. There is also a risk of osteoporosis later in life.

In many cases, scoliosis appears in only a minor form. In the most severe cases, surgery is an option, which can halt and, occasionally, reverse the condition.

As the cause of scoliosis is largely unknown, there is no particular way to prevent it. It is important to identify any abnormal curvature at an early age. Early intervention can help lessen the severity of the condition if physiotherapy, good posture practice or a brace are used.

Scoliosis is an abnormal curvature of the spine. It most often occurs around the age of 11-13 years or during a growth spurt. It is a common condition affecting around 2-3% of the population. About 10% have a minor form of the condition and about 1 in 1,000 people have a …

What are the symptoms of scoliosis?

Signs and symptoms of scoliosis can vary in degree from mild, moderate to severe. These can include: a sideways lean; poorly fitting clothes; tilted waist; one hip higher than the other; uneven shoulders; protruding ribs or shoulder blade, and; a …

The cause of scoliosis is largely unknown. However, it does appear to run in families or can be related to birth defects, neuromuscular conditions including cerebral palsy, or infections of the spine.

Scoliosis generally affects children just before puberty (11-13 years old). It is far more common in girls than boys, with nine out of 10 cases occurring in girls. Scoliosis can also occur in infants.

How is scoliosis diagnosed?

Scoliosis can be identified using the forward bend test. This involves bending forward at the waist so your doctor can see if there is any abnormal curvature in the spine. A spine X-ray can also be used to identify the presence and severity of the scoliosis.

How is scoliosis treated?

In many cases, scoliosis appears in only a minor form. This can be treated with physiotherapy and by practicing good posture. In moderate cases, a brace can be worn under clothing and removed for activities such as sport. In the most severe cases, treatment with …

Can scoliosis be cured?

There is no cure for scoliosis, but it is important to identify any abnormal curvature at an early age. Early intervention can help reduce the severity of the condition.

Will scoliosis clear on its own?

Scoliosis will not clear on its own and can in fact become worse as you age.

Are there different types of scoliosis?

Scoliosis is not contagious.

Ankylosing spondylitis is a form of arthritis in which the joints of the spine become inflamed, in particular where the spine attaches to the pelvis. It usually develops in young adults and causes pain and stiffness, especially in the lower back. Eventually, fusion of vertebrae in the spine can occur.…

Spinal injury can occur to the bones (vertebrae) that make up the spine, or to the spinal cord, which is the bundle of nerves running down the neck and spine that carries electrical signals between the brain and body. Spinal cord injury can disrupt these signals and is therefore extremely serious, because it can result in loss of movement (paralysis) below the point of injury. Damage to the verteb…

Spondylolisthesis is caused when one of the vertebrae of the spine shifts out of position. It can cause back pain and stiffness. It is different to a slipped disc, which occurs when a disc in between two vertebrae is damaged.…

Back pain is a common symptom of different underlying conditions such as arthritis and muscular sprains. Most back pain improves with appropriate treatment. However, prevention through good posture and safe lifting is equally important.…