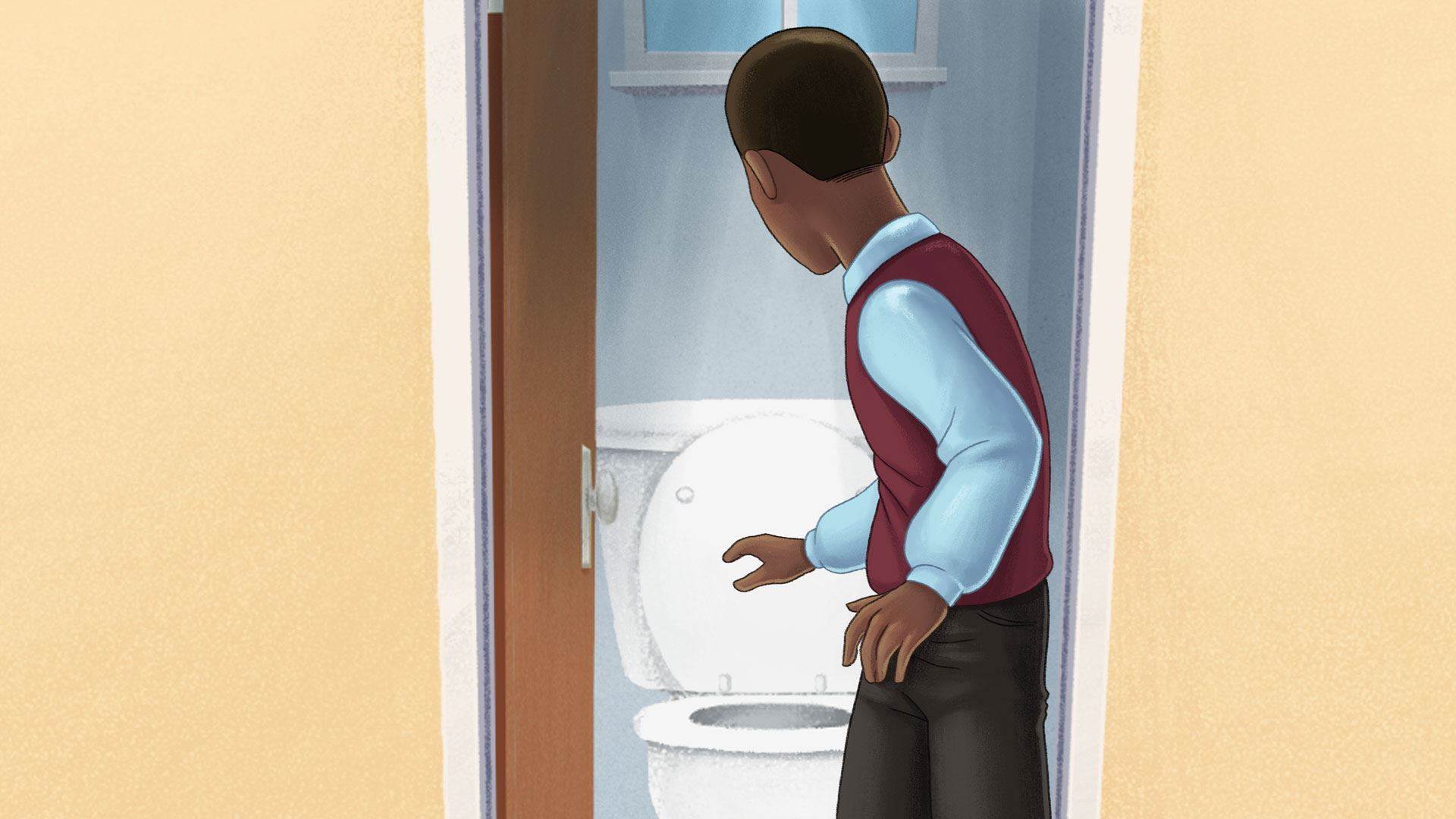 What is rectal bleeding?

Rectal bleeding, or blood in stools, is the term used to describe any loss of blood that passes through the anus, which can originate from anywhere in the digestive system.

Rectal bleeding is very common and can have numerous causes. It is often due to less serious causes; however, occasionally it can be due to a life-threatening condition. All cases of rectal bleeding should be assessed by a doctor.

Rectal bleeding can vary in its color, duration and frequency. Bright red blood usually indicates bleeding from somewhere close to the anus, such as from the rectum or anus. Darker, sticky blood generally means bleeding is higher up in the digestive system, such as in the stomach or small intestine. Other associated symptoms can include rectal or abdominal pain, itching and irritation around the anus, or a mass around the anus.

Potential causes of rectal bleeding include:

Hemorrhoids, commonly known as piles, are swollen, potentially painful varicose veins bulging from the rectal wall. They can look like small grapes and sometimes protrude outside your anus. They are usually caused by straining to pass hardened stools (constipation), obesity, heavy lifting or pregnancy. Although they are not life-threatening, they can cause great discomfort, itching and irritation. Bleeding is usually bright red and characteristically seen on the toilet paper. They are a common cause of rectal bleeding. 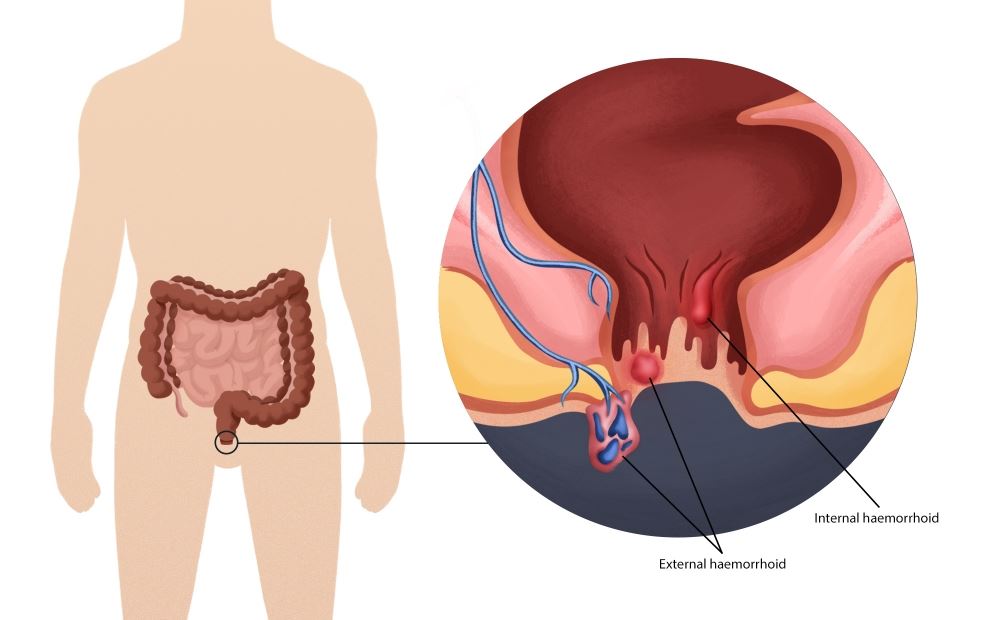 Diverticular disease is a very common disorder of the bowel in which small, abnormal pouches (diverticula) form in the wall of the large bowel. Having diverticular disease without any symptoms is known as diverticulosis. However, if these pouches become inflamed or infected, it is called diverticulitis. The pouches sometimes have weak blood vessels in them that can burst, causing painless but heavy bleeding. The blood is usually bright red and warrants prompt medical attention as there can be significant blood loss. Diverticulitis can rarely cause bleeding.

Angiodysplasia is a condition in which blood vessels abnormally develop in the bowel. These blood vessels are prone to bleeding, which is often painless, heavy and sudden. The blood is usually bright red. It is one of the leading causes of rectal bleeding in people over the age of 60.

Polyps are non-cancerous growths, although a few may develop into bowel cancers, which grow from the lining of the bowel wall. Large polyps can occasionally bleed, but are variable in the type and frequency of bleeding.

Bowel cancer is one of the leading causes of cancer in the US. Symptoms depend on which area of the large bowel the cancer develops in. Rectal bleeding may be a symptom of bowel cancer, particularly it the cancer is closer to the anus. The bleeding can vary from bright red to dark blood. For this reason, rectal bleeding needs to be assessed by a doctor, especially if you are over 50 years old or have a family history of bowel cancer.

Other causes of rectal bleeding include:

A twisted and enlarged vein that is near the surface of the skin or other organ.

Risk factors for rectal bleeding include:

Rectal bleeding warrants medical assessment to rule out any serious cause. Do not be embarrassed about discussing this with your doctor as it is a very common condition. The method of diagnosis will depend on your age and symptoms and may include all or a few of the following tests:

This involves your doctor inserting a gloved, lubricated finger into your anus to check your rectum for lumps or abnormalities. This is a very common, quick and often painless procedure.

This common procedure involves insertion of a thin, hollow lubricated instrument (proctoscope) into your rectum. The instrument has a tiny light and allows your rectum to be examined closely. If your doctor suspects that you are bleeding further up your colon, other tests, such as colonoscopy, may be suggested.

A colonoscopy involves inserting a thin, flexible, lit tube (endoscope) into the rectum to examine your colon and lower bowels. You will be given a mild sedative to help you relax during the procedure and often will be asked not to eat for 12 hours prior to the test. The endoscope can take video, photos and tissues samples, providing your doctor with a highly detailed view of your intestines. 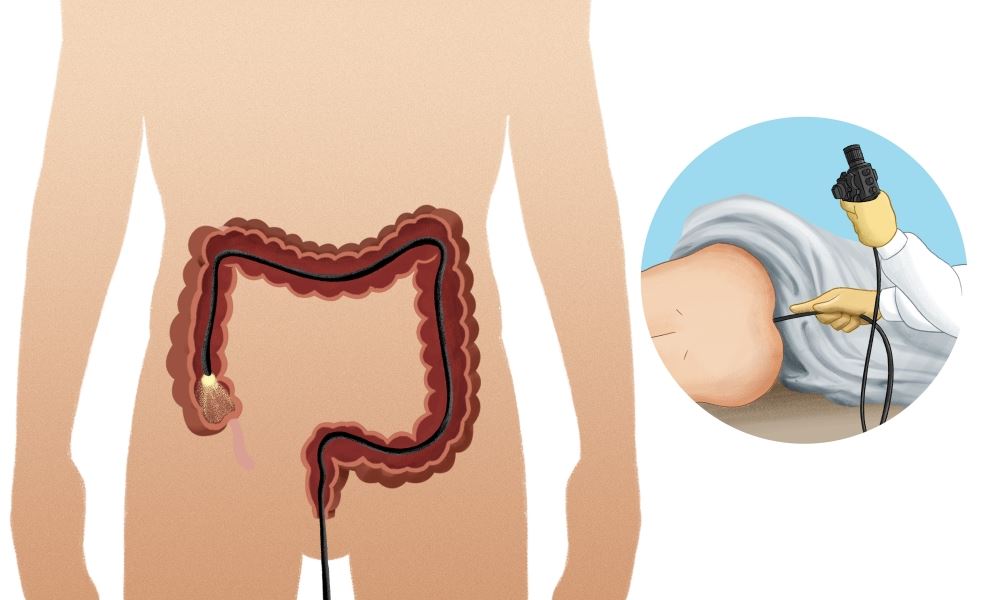 Gastroscopy is similar to colonoscopy, but the tube enters via the mouth and is used to examine the upper digestive tract, including the esophagus, stomach and first part of the small intestine. Your doctor may organize this test if you have had melena, to help in the diagnosis of conditions such as bleeding stomach ulcers.

Special scans of the abdomen, including CT or nuclear scans, may be performed to help visualize abdominal structures and/or the source of bleeding. These tests are generally used to assess for more serious causes of rectal bleeding.

The part of the large intestine that leads to the rectum.

A medical procedure that uses a colonoscope to examine the large bowel.

The series of organs within the body that contribute to the digestion of food. It begins at the mouth and ends at the anus, and includes the stomach, small and large intestines as well as the pancreas, gallbladder and liver.

Also called the gullet or food pipe, it is the muscular tube connecting the throat and stomach. It is lined with a mucous membrane. After ingestion, food and drink travel down the esophagus to be digested in the stomach.

The type of treatment you are offered will depend on the cause of your rectal bleeding.

Bleeding related to angiodysplasia (a condition in which blood vessels abnormally form in the bowel) is initially managed in a hospital, so a person can be closely monitored and supported with intravenous fluids and blood transfusions until the bleeding resolves. In severe cases, or where bleeding does not cease, a variety of surgical procedures can be used.

In rare cases, hemorrhaging (uncontrolled bleeding) may occur and require immediate surgery to prevent further blood loss. Bowel resection (surgical removal of the bleeding part of the bowel) may need to be done as an emergency procedure. Less severe or slower bleeds may be able to be managed via colonoscopy rather than surgery.

Polyps that are found at the time of colonoscopy can generally be removed at the same time using small biopsy or snaring devices. Often the removed polyps are sent to be examined by a pathologist to ensure no cancerous growths are detected.

If you have been diagnosed with bowel cancer, you may need to undergo surgery, chemotherapy, radiotherapy, biological therapy or a combination of all of these. Please refer to our report on bowel cancer for full details.

A medical procedure that uses a colonoscope to examine the large bowel.

A treatment that uses ionizing radiation to kill or control growth of malignant cancer cells.

Complications associated with rectal bleeding are as follows:

Loss of blood will eventually lead to anemia, which can cause pale skin, breathlessness, weakness, dizziness and fatigue.

If you lose a large volume of blood, your body may go into shock if untreated. This can be potentially fatal, but can be managed with the prompt medical care.

A life-threatening condition in which the organs and other tissues do not receive adequate blood flow.

The outcome for rectal bleeding depends on your diagnosis and individual circumstances. Rectal bleeding generally needs medical assessment to rule out serious conditions.

Steps to help prevent rectal bleeding depend on the cause, but include the following:

Get regularly screened for bowel cancer if you are over 50 years of age or have a family history of bowel cancer. Discuss screening options with your doctor.

What is rectal bleeding?

Rectal bleeding occurs when you see blood in the toilet pan or on the toilet paper after wiping your anus. Bright red blood usually means you are bleeding from somewhere close to your anus, such as from your rectum or anus itself. Darker, stickier blood means you …

What are the symptoms of rectal bleeding?

Signs and symptoms of rectal bleeding can include: fresh (bright red) blood appearing in the toilet pan, on toilet paper or underwear; darker, stickier blood that may be plum-colored or tarry in appearance; profuse bleeding with or without pain, …

It is worth noting that while taking medications such as iron supplements or eating lots of beetroot can change the color of your stool, it is recommended you visit your doctor if you notice red, plum or black-colored stools. Other causes of rectal bleeding can …

Who gets rectal bleeding?

Risk factors for rectal bleeding include: older age, constipation, anticoagulant drugs such as aspirin or warfarin, and a family history of conditions such as hemorrhoids, inflammatory bowel disease, polyps or bowel cancer.

How is rectal bleeding diagnosed?

The method of diagnosis will depend on your age and symptoms and may include all or a few of the following tests: digital rectal examination (DRE) your doctor will insert a gloved, lubricated finger into your anus to check your rectum for lumps or …

Can rectal bleeding be cured?

Some cases or rectal bleeding are easier to treat than others. Many cases of hemorrhoids can be resolved with simple lifestyle changes and home treatments. Surgery is typically performed on polyps that are found at the time of colonoscopy. These can generally …

Will rectal bleeding clear up on its own?

The outcome for rectal bleeding depends on your diagnosis and individual circumstances. If you have hemorrhoids you may have ongoing but non life-threatening bleeding. Your doctor will be able to advise you on any self-help treatments such as …

The only type of rectal bleeding that is contagious is when the cause is gastroenteritis. This is a highly contagious condition as a result of infections with bacteria, viruses or parasites.

Are there different types of rectal bleeding?

Complications of rectal bleeding are: anemia caused by continued loss of blood. Symptoms to watch out for are pale skin, breathlessness, weakness, dizziness and fatigue. Shock - if you lose a large volume of blood, your body may go into shock if untreated. This …

Colorectal cancer is the name for cancers that arise in the large intestine or rectum. Also known as colon cancer or colorectal cancer, bowel cancer can interfere with bowel function and spread to other parts of the body, such as the liver and lungs.…

Crohn's disease is an inflammatory bowel condition that mainly affects the intestines. The main symptoms include diarrhoea, abdominal cramping and tiredness. Although there is no known cure, Crohn’s disease can be managed with medications, dietary measures and, in some cases, surgery.…

Diverticulitis is where abnormal pouches form in the wall of the large intestines and become infected. It presents as abdominal pain, fever and unwellness. Treatment is important to prevent further complications.…