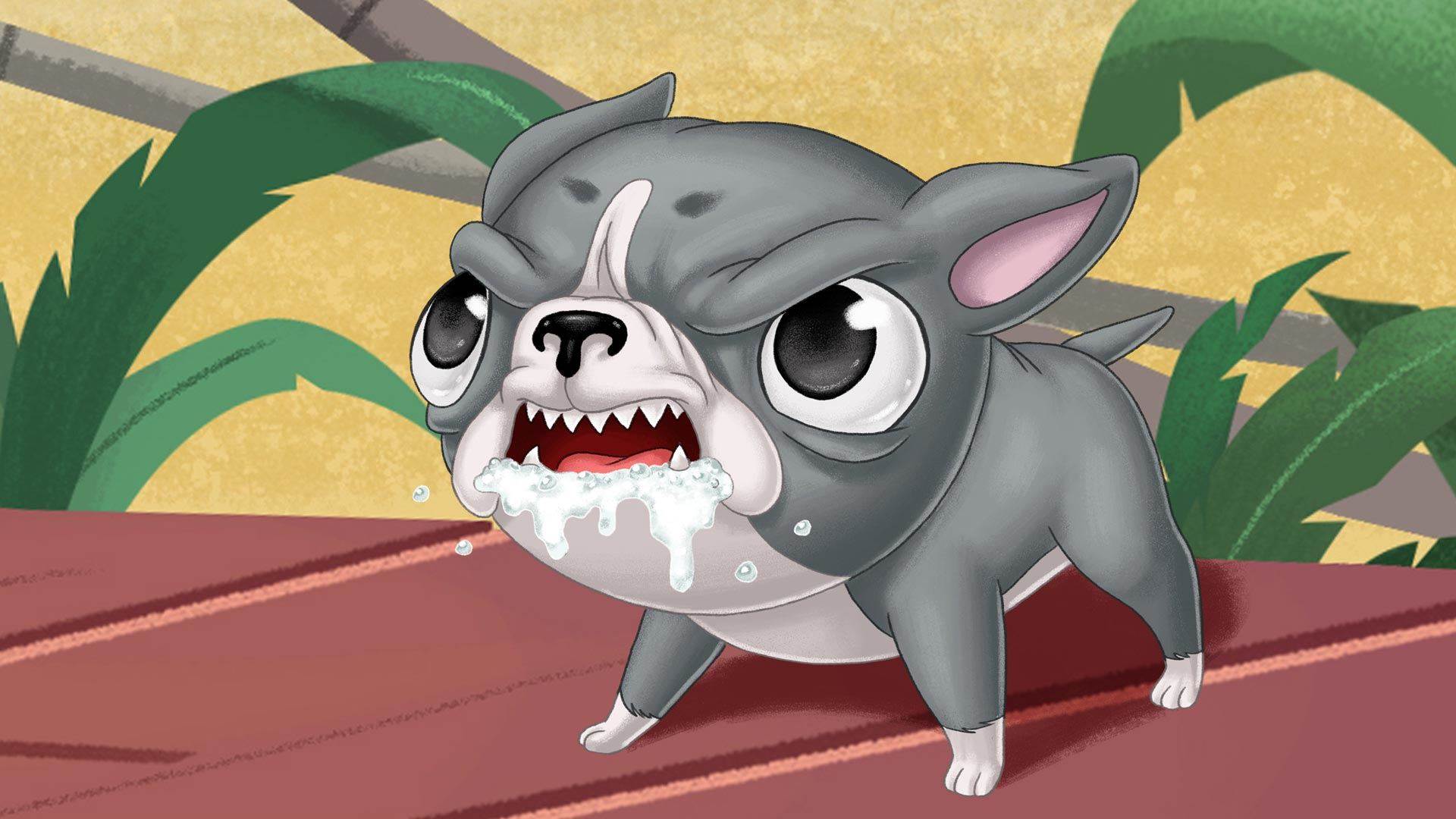 Rabies is a deadly infectious viral disease. You can get rabies by being bitten by an infected animal. Currently at least 55,000 people die worldwide every year of rabies, [1] mostly in India, Africa and South-East Asia, though rabies was once common all over the world. It is diagnosed in humans by observing the characteristic signs and by laboratory tests. Symptoms include fever, pain and extreme changes in behavior.

Pertaining to an illness caused by a virus.

Rabies is caused by the rabies virus. It is transmitted between animals and from animals to humans, almost always through bites and rarely through other means.

Rabies can potentially occur in any mammal. Animals known to transmit rabies include: 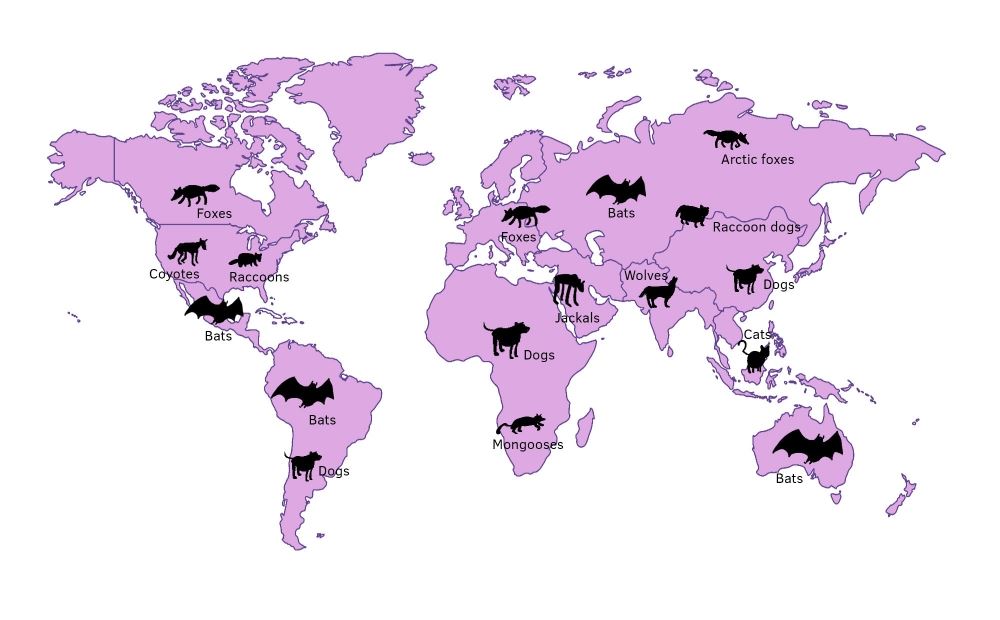 Different animals from around the world that can be potential carriers of the rabies virus.

Other ways of transmission

A person can, in rare cases, become infected with rabies without being bitten. Handling and skinning animal carcasses and eating raw animal meat can also transmit the virus.

Direct human-to-human transmission is very rare and occurs almost only in cases when infected donated organs, particularly corneas, are transplanted into uninfected people. It is possible to catch rabies from an infected person's saliva, so infected people are put in quarantine. There has been no well-documented case of human-to-human infection through biting. [2]

A bundle of nerve tissue that runs from the brain through the spinal column and connects the brain to the body, transmitting sensory and motor signals.

The glands in the mouth that produce saliva (spit).

People who are most at risk of catching rabies are people who live in or are travelling in countries where rabies is still relatively common in animal populations, and who are also more likely to come into contact with infected animals. These can include people who are:

After being bitten, there is an incubation period when symptoms do not appear. It can last from a few days to several years, but is usually about 3-12 weeks.

When symptoms appear, they can include:

A few days after these initial symptoms, symptoms of the nervous system can appear. These are divided into two different forms, known as furious rabies and paralytic rabies.

Symptoms of furious rabies include:

Paralytic rabies appears in about 30% of rabies cases and is more difficult to diagnose correctly. [2] Symptoms include:

A mental state caused by temporary disturbances in brain function and characterized by a host of symptoms that may include fluctuating confusion, restlessness, excitement, incoherence, illusions, anxiety, and attention deficit.

An inability to move or feel; a loss of muscle function or sensation.

Involuntary, abnormal contractions of muscles, leading to uncontrolled shakes and jerks of the body.

If a rabies infection is suspected due to an animal bite and/or the appearance of symptoms, it can be diagnosed in humans by observing the characteristic symptoms and by laboratory tests.

Tests for the presence of the virus can be done on several tissues, including:

The best places for finding the rabies virus are cells of the nervous system. However, taking samples from the nervous system can cause harm, and therefore is generally avoided in humans. To confirm or rule out a rabies diagnosis, a tissue sample can be taken from the biting animal's brain and tested for the presence of the rabies virus. This requires the animal to be put down.

Fluid found inside the brain and spinal column. It cushions and protects the delicate nervous tissue.

If bitten or otherwise exposed to the virus, immediate treatment (known as post-exposure prophylaxis, or PEP) is necessary in order to prevent the virus from reaching and infecting nerve cells. This can include:

This experimental course of treatment was developed in 2004 and saved the life of an unvaccinated teenager infected with rabies. The treatment involves placing the infected person under an artificially-induced coma in order to delay the virus's advance into the brain. The Milwaukee protocol is a last-ditch resort and its chances of success are low.

Once the rabies virus is established in the body, it is almost always fatal. Some cases are reported in which people have recovered from rabies, particularly those who have been exposed to rabies from bats and other non-canine mammals. However, rabies transmitted by infected dogs, foxes and other canines appear to be more virulent and the chances of survival are very low.

The most effective way of reducing the risks of rabies is vaccination. The original rabies vaccine was first administered in 1885 by Louis Pasteur. The vaccine is generally safe and effective. It is recommended for people who are expected to come into contact with wildlife, or are travelling to areas where rabies is found. People who have had the vaccine still need to seek immediate medical care and treatment if they are exposed to rabies.

Another way to reduce the risk of rabies infection is to reduce the number of animals infected with the virus. Most deaths from rabies are the result of dog bites, both stray and domesticated.

Ways of reducing the risk of rabies in animals living in rabies-prone areas include:

Rabies is a dangerous infectious disease caused by the rabies virus.

How does a rabies infection occur?

The rabies virus is transmitted to humans through the bites of animals, especially dogs.

How common is rabies?

Rabies is no longer common in most countries. However, it is still a significant issue in some regions of the world, including India, Africa and South-East Asia. An estimated 55,000 people die of rabies every year, including a few cases a year in almost every country.

What are the symptoms of rabies?

Initial symptoms of rabies can include fever; chills; headache; sore throat; loss of appetite; vomiting; discomfort; irritability; and pain, tingling and itching at the site of the bite. A few days after these symptoms, symptoms of the nervous system can …

Anyone not vaccinated against rabies can be infected if bitten by an infected animal.

How is rabies diagnosed?

Your doctor or other health professional will diagnose rabies by observing the clinical signs and by performing specific tests on samples of your blood, skin, saliva or spinal fluid. Tests on the biting animal's brain tissue if it has been euthanized can also help …

Rabies is fatal if it is not caught and treated quickly and effectively.

How is rabies treated?

Treatment after infection can include cleaning the bite site, vaccination and special immunoglobulin treatment.

How can I prevent being infected?

The best ways of avoiding rabies are getting vaccinated beforehand and avoiding contact with wildlife and stray dogs.

What is the 'Milwaukee protocol'?

The Milwaukee protocol is an experimental treatment that was developed in 2004 and saved the life of an unvaccinated teenager infected with rabies. The treatment involves placing the infected person under an artificially-induced coma to delay the virus's …

Dengue fever is an infectious viral disease transmitted by mosquitoes in tropical and sub-tropical climates. Most people with dengue fever suffer unpleasant symptoms, such as fever, headache and vomiting, but will make a full recovery. However, repeated infections can result in a form of haemorrhagic fever.…

Mosquitoes can transmit a variety of disease-causing microorganisms, including many kinds of viruses and several kinds of parasites. Often, different species of mosquitoes, found in different locations, will transmit different diseases.…

Typhoid fever is caused by a strain of salmonella bacteria. It is transmitted via contaminated food or water, and can cause severe diarrhoea and a rash. Typhoid fever is much more common in developing countries.…