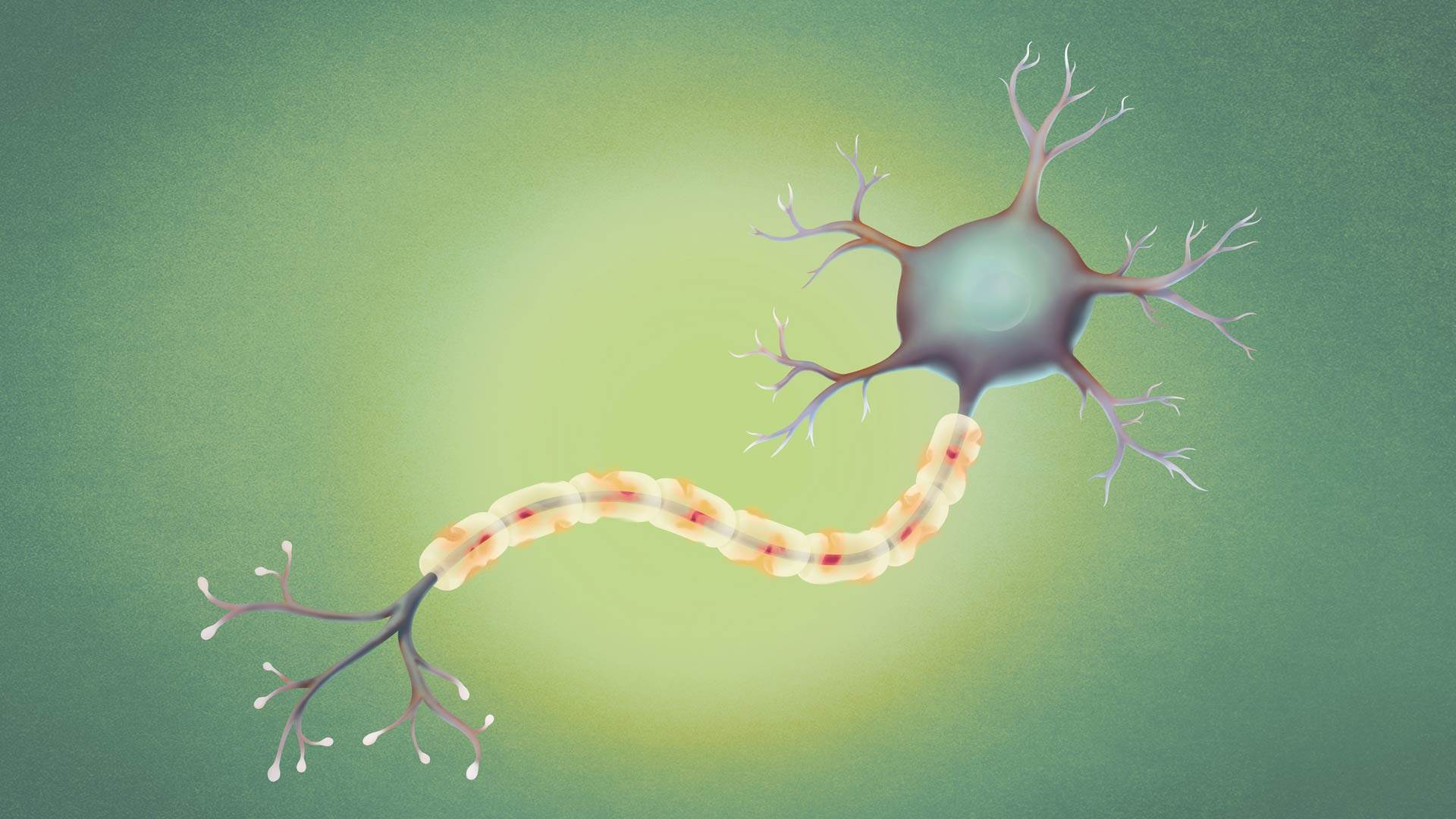 What is multiple sclerosis? 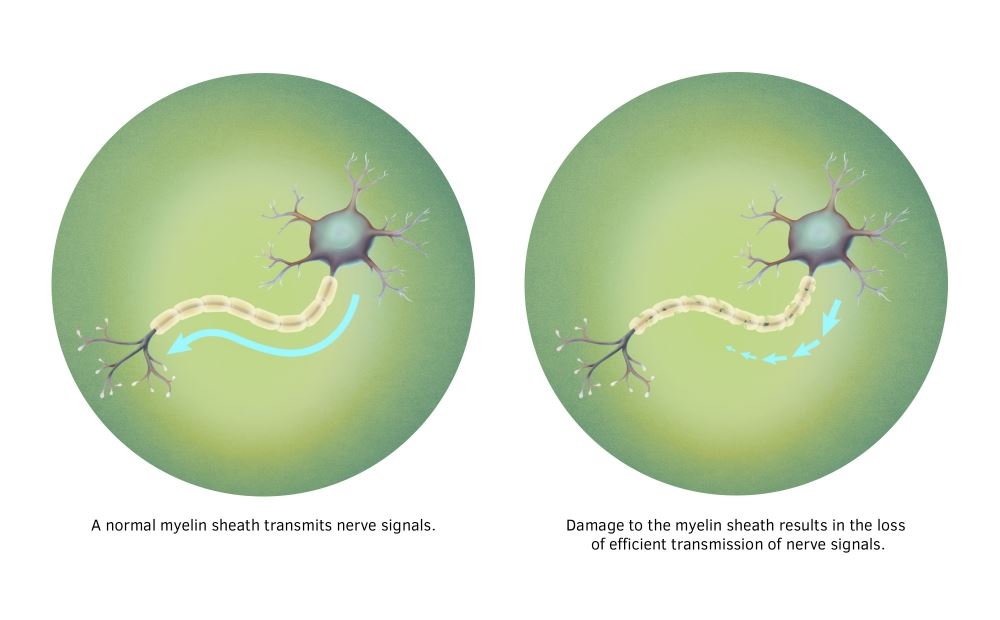 The outer coating of the nerves, called the myelin sheath, is degraded in multiple sclerosis.

Current understanding of the cause of MS suggests it may be due to factors such as:

It is likely that MS is caused by changes in several genes, alongside specific environmental factors.

Having a close family member with MS or having a specific family of genes, called human leukocyte antigen (HLA) complex, may increase the risk of developing MS. HLAs are found on the surface of cells and play an important role in the process that allows the immune system to distinguish healthy cells from those needing removal. The strongest genetic risk factor for developing MS has been attributed to changes in the HLA-DRB1 gene. The vast majority of people with this genetic change will not go on to develop MS, but the effect of such a genetic change on the immune system is highly complex and yet to be clearly understood.

Women are more likely to develop MS than men. For every two men diagnosed with MS, there are three women diagnosed.

There is a higher incidence of MS in countries farther from the equator. This is thought to be linked to lower levels of sunshine and reduced production of vitamin D in the body. There is a suggested link between low levels of vitamin D production during childhood and the development of MS.

Exposure to smoking is associated with an increased risk of developing MS.

The risk of developing MS is potentially higher in people with a chronic autoimmune condition, such as type 1 diabetes.

The specific gene variants that increase an individual's risk of developing a medical condition.

A vitamin that is important for the health of bones and teeth as it promotes absorption of calcium from the diet.

There are four main types of MS:

People with RRMS have temporary episodes, called relapses, during which time their symptoms reappear. These relapses are followed by recovery periods (remissions). During remission, their symptoms partially or completely clear up. This is the most common form of MS.

In SPMS, people start with RRMS and eventually transition to having symptoms that progressively worsen over time. There may or may not be relapses or remissions in this type of MS.

This is one of the less common forms of MS and is characterized by symptoms that progressively become worse from the onset of the condition. People with PPMS do not experience any remissions.

This is a rare form of MS that is characterized by symptoms that steadily become worse, but also acute periods of worsening symptoms (known as flares).

There are a few different types of multiple sclerosis and people may experience a wide range of symptoms that can vary in intensity and frequency. Some people may have intermittent symptoms, while others may find their symptoms follow a progressive pattern. The changing nature of the symptoms of this condition may make life unpredictable.

Many people with MS experience a feeling of extreme mental and/or physical exhaustion. Fatigue may be experienced for hours, days or even months. Depending on its frequency and intensity, fatigue may interfere with the capacity to work, exercise and take part in social activities.

For many people affected by MS, the emotional changes and impaired cognitive function can prove challenging. Half of all people with MS will not experience any cognitive changes, but for those who are affected, they may notice changes that may include:

Some people with MS may find their mood has been affected and they may become depressed, or experience mood swings that may manifest as bipolar disorder. The types of changes that someone may experience will depend on which parts of the brain have been affected by the lesions associated with MS.

Depending where damage has occurred, some people with multiple sclerosis may experience problems with their bladder and bowel function. Bladder problems may include urinary incontinence, incomplete voiding (emptying of the bladder) or increased urinary frequency and urgency. Constipation is the most common bowel problem for people with MS.

Up to two thirds of people with MS experience pain that can affect their capacity to carry out work, exercise and social activities.

Musculoskeletal pain is the result of weakness, wasting and spasticity. This pain is often felt in the back, hips, legs and arms. Some people with MS may experience back pain when sitting down or standing, while leg spasms or cramps can often occur during sleep.

Neuropathic pain is the result of disruption to messages transmitted by nerves within the brain and spinal cord. Neuropathic pain can include altered sensation and typically occurs in the extremities. This type of pain is often described as:

A particular type of neuropathic pain can be experienced in the trigeminal nerve, which carries impulses between the brain and the face. This is called trigeminal neuralgia and is often an early symptom of MS. The pain associated with trigeminal neuralgia can range from a constant ache to intense stabbing in the jaw or face. This pain may last from a few seconds to several minutes.

Multiple sclerosis can cause some people to have problems with movement, balance and coordination including:

The types of visual problems that may be associated with optic neuritis may include:

Some people may develop visual problems that are not related to optic neuritis and these may include:

Early MS may present as a vague set of symptoms that may occur sporadically over a long period of time. Although there is no single test for the diagnosis of MS, there are specific criteria used by healthcare professionals to help them make an accurate diagnosis.

For a diagnosis of MS to be made, there must be:

A doctor will take a person's detailed medical history and conduct a neurological examination. 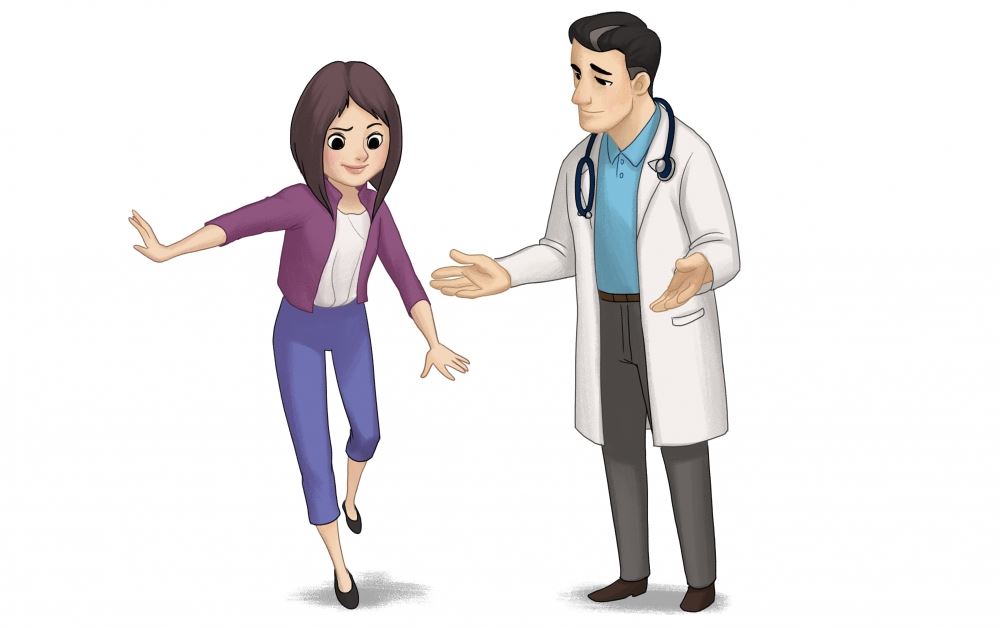 Blood tests may be ordered to exclude other possible causes of symptoms. These tests analyze:

Treatment for MS may vary, depending on factors such as:

Medication is used to either slow the progression of MS, or to manage accompanying symptoms. When medication is administered, the dosage may vary between individuals and it may be altered throughout the course of the disease. As with any medication, treatment of MS may be associated with side effects of varying severity.

Methylprednisolone is a corticosteroid medication that suppresses the immune system and reduces the swelling and inflammation associated with MS.

MS patients who have a relapse and whose symptoms are affecting functions such as vision and walking can be treated with intravenous methylprednisolone, usually for three days. Patients with severe relapse are usually administered methylprednisolone for five days.

For patients who show no improvement with methylprednisolone, or when its use is not advised (such as in patients with hypertension or poorly-controlled diabetes), treatment includes intravenous administration of immunoglobulin (IVIG). Although it is not yet clear how IVIG works, it is thought to ease the inflammatory response seen in MS patients and it may also play a role in the repair of the myelin sheath.

Fatigue is a common symptom experienced by people with MS. People experiencing fatigue may be advised to first try gentle exercise and weight training, and good sleep-hygiene practices. If such therapies fail to provide a benefit, certain medications may help, such as amantadine.

People with MS who are experiencing urination frequency, urgency and incomplete voiding may be advised to avoid caffeine, which can often worsen these symptoms. If symptoms are severe and disruptive, medications may prove beneficial, such as oxybutynin.

One of the more distressing and painful symptoms experienced by people with MS is abnormal sensation.

If the symptoms are severe and interfere with function, low-dose anticonvulsants may be prescribed. Examples of medication that may be used in such treatment include gabapentin, pregabalin and carbamazepine.

Exercise and physical therapy can help to decrease spasticity and soreness of muscles that is commonly experienced by people with MS.

When these therapies fail to improve symptoms, medications may be prescribed. The medication may vary depending on the exact symptoms, but some of the more common medications that may be used include carbamazepine, antidepressants and non-steroidal anti-inflammatory drugs (NSAIDs).

Double vision may be treated with steroids or eyeglasses with special prisms that minimize double vision.

For people who experience nystagmus, medication may prove beneficial, such as clonazepam.

Medication used to prevent or reduce the severity of epileptic seizures and other convulsions.

Some factors contributing to MS complications may include:

Because MS is a chronic illness, it has the potential to affect people across their work, relationships, sleep, diet and ability to exercise. Some of the more common complications that may be associated with MS may include:

Although there is currently no cure for MS, people with MS can have a similar life expectancy as the general population.

There are no clear strategies to prevent the development of MS.

What is multiple sclerosis?

Multiple sclerosis is a condition in which the outer layer of nerves in the brain and spinal cord become damaged. Damage to this outer layer means that signals move less effectively between neurons. The damage causes scars, called plaques or lesions, that can …

What are the symptoms of multiple sclerosis?

The symptoms of multiple sclerosis vary, as they are related to damage in the brain and spinal cord, so they will depend on which specific areas have been damaged. Some of the more typical symptoms may include visual disturbances, problems with …

The exact cause of multiple sclerosis is yet to be clearly understood.

Who gets multiple sclerosis?

Women are more likely to develop multiple sclerosis than men. People in countries that receive lower levels of sunshine have higher rates of multiple sclerosis. It is most commonly diagnosed in people between 20 and 40 years of age.

How is multiple sclerosis diagnosed?

There is no single diagnostic test used for multiple sclerosis. Instead, diagnosis is based on lesions (scarring) found in the brain or spinal cord by MRI scans and assessment of neurological signs and symptoms.

How is multiple sclerosis treated?

Can multiple sclerosis be cured?

Can multiple sclerosis be prevented?

There is no known way to prevent multiple sclerosis.

Are there different types of multiple sclerosis?

There are four types of multiple sclerosis, which are associated with different rates of disease progress and frequency of symptoms. These types are: 1) Relapsing-Remitting MS (RRMS). 2) Secondary-Progressive MS (SPMS). 3) …

How common is multiple sclerosis?

Multiple sclerosis is the most common condition that affects the central nervous system in young adults.

A stroke happens when oxygen-rich blood cannot reach the brain cells, often due to blockage or damage of a blood vessel. This loss of oxygen damages brain cells within minutes, which then start dying. Occurring mostly in older adults, a stroke is a serious medical emergency.…

Alzheimer’s disease is a degenerative condition of the brain that causes problems with memory, thinking, language and behaviour. It is the most common form of dementia and a leading cause of disability in people over 65 years of age. Treatment aims to slow the progression of the disease and improve quality of life.…