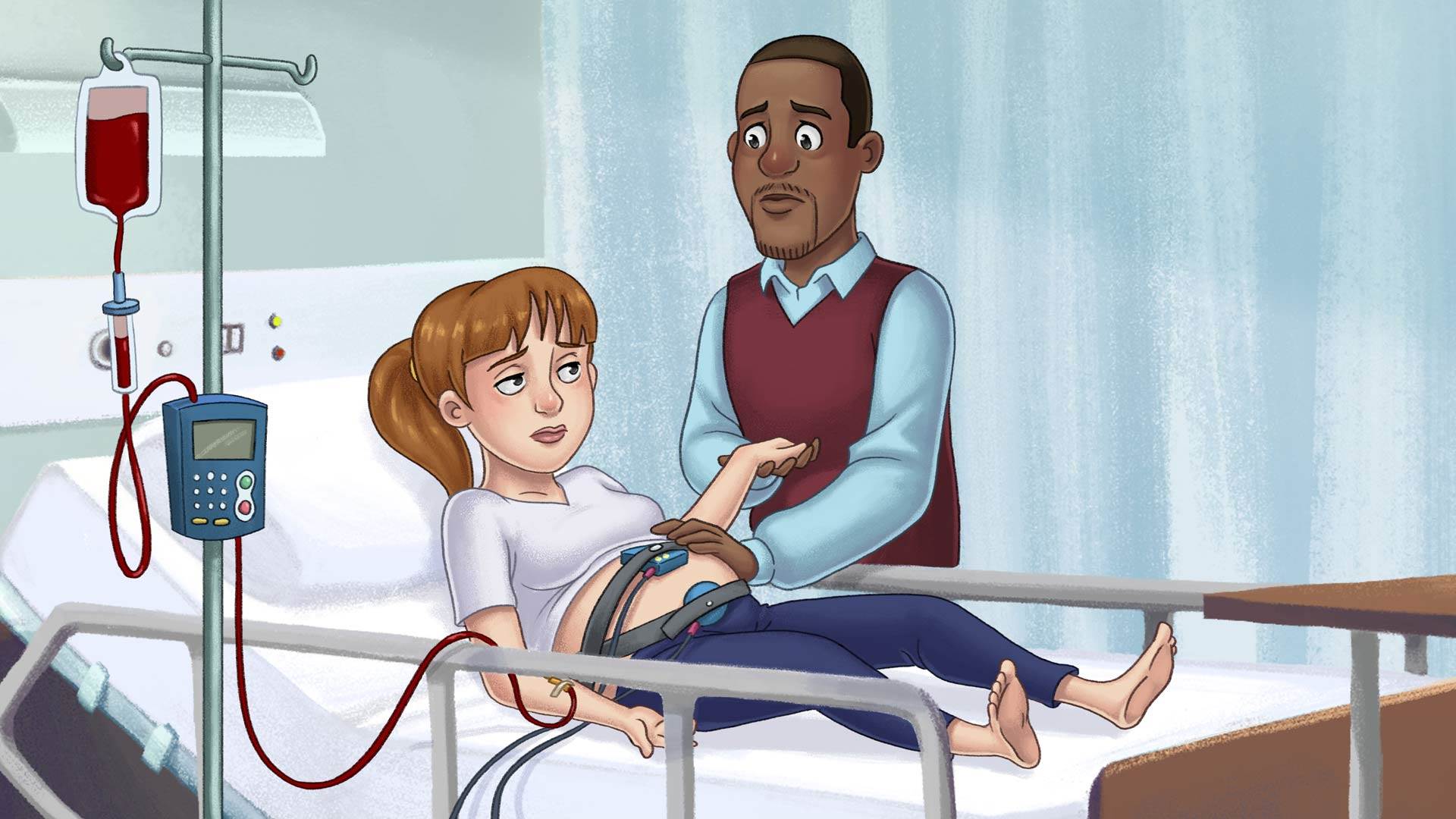 What is HELLP syndrome?

The condition name, HELLP, is an acronym:

HELLP syndrome typically arises in the third trimester of pregnancy, but in some cases it may occur in the first week after the baby is born.

Preeclampsia and HELLP syndrome are typically characterized by high blood pressure, which may lead to stroke, seizures, or multiple organ failure if it is left untreated.

Women with HELLP syndrome may experience severe abdominal pain below their ribs, not unlike heartburn, except antacids will not relieve their pain. Other symptoms of HELLP syndrome can be easily confused with gall bladder disease or viral illnesses. 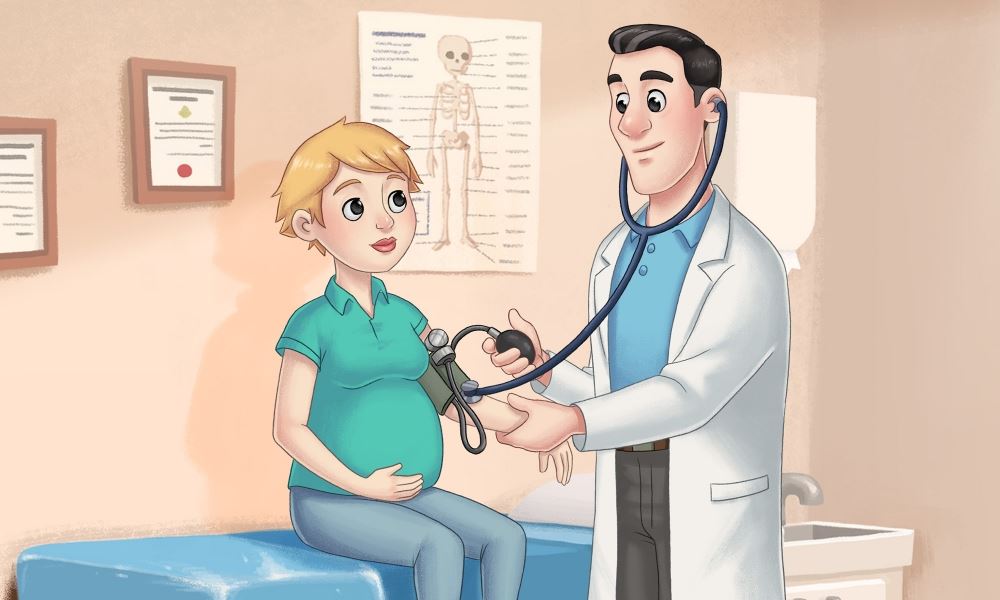 A small organ attached to the liver that stores bile until it is released into the small intestine, to aid the digestion of food.

Small blood cells found in the blood that are essential for clotting to occur.

Cells in the blood that transport oxygen from the lungs throughout the body and carbon dioxide from the body to the lungs.

One third of a period of time. Often used to describe the three stages of pregnancy, in which each trimester is about three months long.

Pertaining to an illness caused by a virus.

Proteins that help to speed up chemical reactions in the liver. Elevated levels of liver enzymes may be an indication of liver damage or inflammation.

It is still not clear what causes some pregnant women to develop HELLP syndrome.

The symptoms of HELLP syndrome are often vague and can be easily confused with other medical conditions. Most cases of HELLP syndrome occur before the 37th week of pregnancy, but some cases may develop in the week after the baby is born.

Some of the signs and symptoms associated with HELLP syndrome can include:

Pain across the face, eye, ears and other head or neck areas. Can be a dull ache, stabbing or throbbing pain.

Because HELLP syndrome is a serious complication, prompt medical diagnosis is important.

The severity of HELLP syndrome is classified according to the blood platelet count as follows:

Small blood cells found in the blood that are essential for clotting to occur.

Cells in the blood that transport oxygen from the lungs throughout the body and carbon dioxide from the body to the lungs.

Proteins that help to speed up chemical reactions in the liver. Elevated levels of liver enzymes may be an indication of liver damage or inflammation.

If the pregnancy is more than 34 weeks, definitive treatment for HELLP syndrome is delivery of the baby. Most symptoms and side effects associated with HELLP syndrome will go away two or three days after the baby is born.

If the pregnancy is less than 34 weeks, treatment may vary, depending on the severity of the condition, but some of the treatment options may include:

The process of receiving blood or blood components from an external source directly into the bloodstream.

Babies born to mothers with HELLP syndrome may be more affected by the condition than their mother.

Complications associated with HELLP syndrome may include:

A pair of organs responsible primarily for regulating the water balance in the body and filtering the blood.

The organ that forms within the uterus of a pregnant woman to provide the fetus with nourishment from the blood supply of the mother.

A baby that is born before 37 weeks' gestation.

When treated early, women with HELLP syndrome can usually make a full recovery, with most of their symptoms and side effects resolving within a few days after delivery.

The outcome for the baby tends to be more variable. Babies with a smaller birth weight are at greater risk. They may need longer hospital stays and support with breathing.

There is no known way to prevent HELLP syndrome, but the likelihood of developing it can be reduced by:

Before the birth of a baby.

What is HELLP syndrome?

HELLP syndrome is a rare and serious complication of pregnancy characterized by high blood pressure that, if left untreated, may lead to seizures and stroke.

What are the symptoms of HELLP syndrome?

The symptoms of HELLP syndrome can easily be confused with other conditions, but may include: headaches; nausea and vomiting that become increasingly worse; abdominal pain under the ribs, around the liver; blurry vision, and; fatigue.

The exact cause of HELLP syndrome remains unclear.

Who gets HELLP syndrome?

HELLP syndrome typically occurs in the third trimester of pregnancy, or during the first week after delivery. It is more common in women over 25 years of age.

How is HELLP syndrome diagnosed?

HELLP syndrome is diagnosed by a thorough physical examination, and by tests including: blood and urine tests, and blood pressure measurements. Blood tests are used to determine the levels of red blood cells, liver enzymes and platelets. The urine sample …

How is HELLP syndrome treated?

Can HELLP syndrome be prevented?

Although there is no known prevention for HELLP syndrome, the risk of developing HELLP syndrome may be decreased by maintaining good health and fitness before becoming pregnant, getting good prenatal care and telling your healthcare practitioner if you have …

HELLP syndrome is a rare but serious pregnancy complication. Early diagnosis and treatment are very important to improve outcomes for the mother and baby.

What increases the chances of developing HELLP syndrome?

Some of the known risk factors for HELLP syndrome include: having a history of HELLP syndrome; having diabetes; having preeclampsia; being over the age of 25, and; being Caucasian.

How common is HELLP syndrome?

HELLP syndrome affects around one to two pregnancies in every 1000. It occurs in about one in ten cases of preeclampsia.

Pre-eclampsia is a condition in which placental abnormalities cause serious complications for a pregnant woman, such as high blood pressure and leaky kidneys. Involvement of other organs distinguishes it from pregnancy-induced high blood pressure.…

A placental abruption occurs in pregnant women when the placenta detaches from the wall of the uterus before the baby has been born. Also known as abruptio placenta, this is an emergency that can threaten the life of both mother and baby.…

Cholestasis is a condition in which the flow of bile from a pregnant woman’s liver is slowed, causing a build-up of bile acids in the bloodstream. It may occur in the later stage of pregnancy and the most notable symptom is intense itching.…

An ectopic pregnancy occurs when an embryo begins to develop at a site other than within the uterus, such as in a fallopian tube. Unfortunately, it results in the loss of the pregnancy. If left untreated, an ectopic pregnancy can cause dangerous complications, such as haemorrhage into the abdomen.…