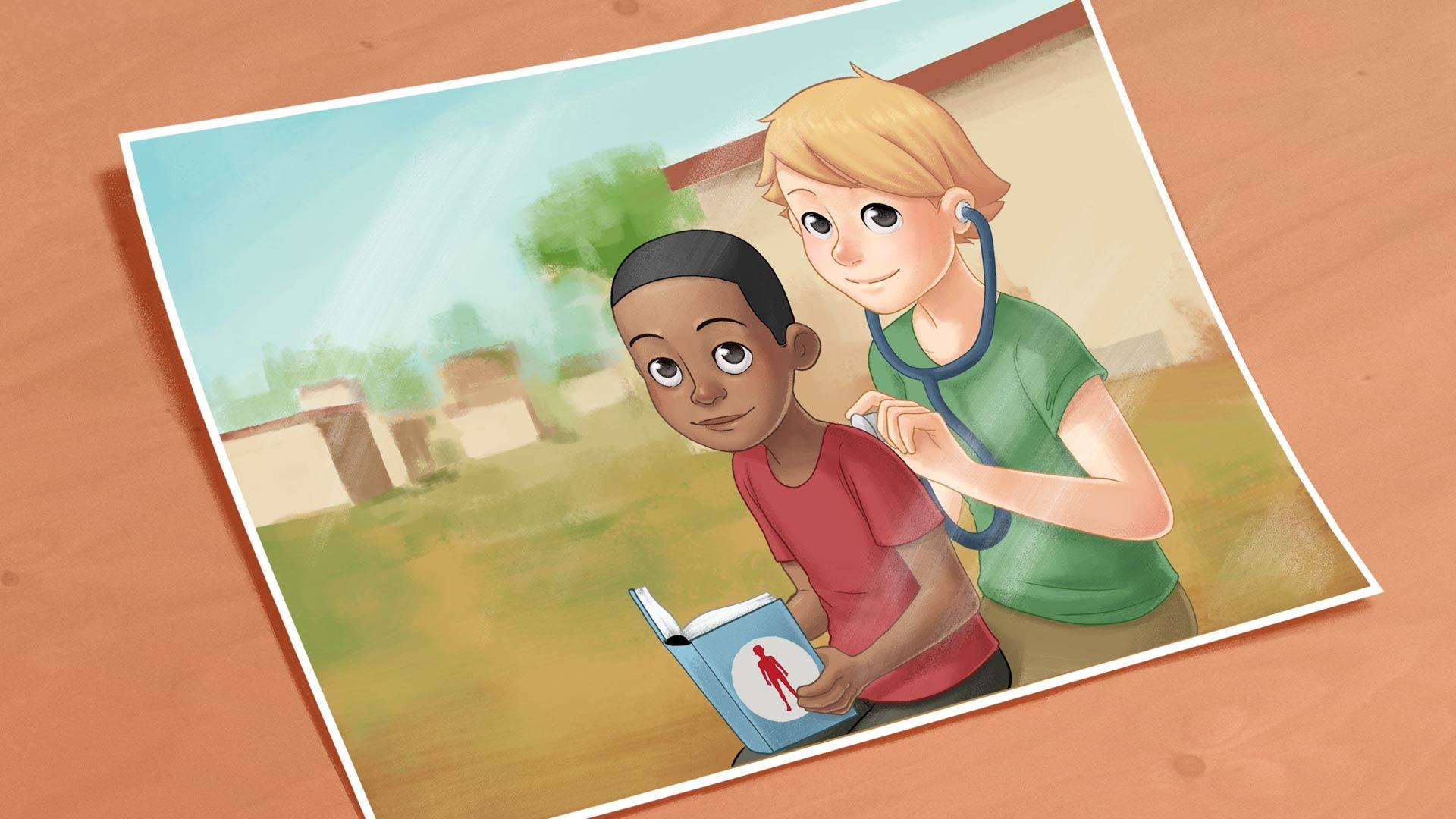 Ebola, also known as Ebola hemorrhagic fever or Ebola virus disease, is an potentially fatal, infectious disease. It is caused by a virus, named after a river in the Democratic Republic of Congo, where it was first identified in 1976 and has since caused several outbreaks of disease. The virus spreads through contact with an infected person's bodily fluids.

Ebola is a serious disease causing high mortality rates. However, the risk of infection is reduced if sensible precautions are taken.

The condition is caused by the Ebola virus. The virus can be found in non-human animals; it is most likely passed to humans from infected bats.

There are five known strains of the virus, four of which cause serious disease. Some strains are more virulent than others. The fifth strain, known as the Ebola-Reston virus, was detected in pigs in the Philippines in 2008, but does not cause illness.

How the Ebola virus causes disease

After the virus enters the body, it can infect many types of cells, including liver cells and cells of the immune system. It then multiplies rapidly, often overwhelming the body's immune defenses.

Also, the virus infects and damages the cells that make up the blood vessels, leading to blood-vessel damage and severe bleeding. The virus can also interfere with the body's blood-clotting mechanism. The most common cause of death is uncontrolled bleeding.

The Ebola virus passes from person to person via bodily fluids, including blood, saliva, semen or vaginal secretions, urine, feces, vomit, mucus, sweat and tears. You can also become infected through contact with infected animals or eating their meat.

It is worth noting that the virus can remain in the testes for a long period. An infected male can sexually transmit the virus for up to seven weeks after their recovery.

Ebola virus is not known to spread from person to person via droplets from coughs and sneezes.

The male sex organs located in the scrotum that produce sperm.

The two most major risk factors for catching Ebola are:

Ebola was first identified in 1976 when an outbreak occurred in Sudan (now Southern Sudan) and Zaire (now Democratic Republic of the Congo). The initial outbreak ended in 1979 and Ebola did not resurface for 15 years. Since then, Ebola outbreaks have occurred every few years, all of them in Africa. The 2014-15 outbreak is by far the largest, with more people infected than all the previous outbreaks combined. [1] 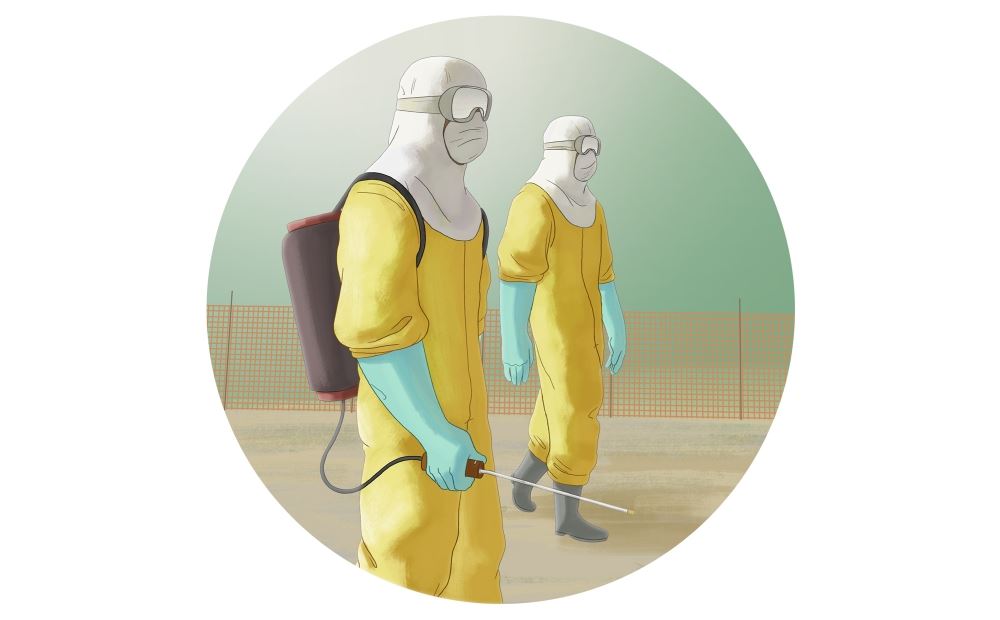 As well as the cost in human lives and suffering, an outbreak such as the 2014-15 Ebola outbreak can have far-reaching implications. A country experiencing an outbreak must shoulder the direct costs of controlling the outbreak. These include loss of income from trade and travel restrictions. In already struggling economies, this can cause food shortages and increased poverty - which may sometimes have an even larger impact on the population's health than the outbreak itself.

Signs and symptoms of Ebola initially resemble those of influenza and usually appear any time from 2 to 21 days after infection, though the most common time frame is 8 to 10 days.

Symptoms of Ebola can include:

As the disease progresses, further symptoms appear, including:

Ebola cannot be diagnosed by its symptoms alone. A blood sample is tested in the laboratory for the presence of the virus and/or antibodies to it.

At present, there is no specific treatment for Ebola. A person suspected of being infected will be quarantined to prevent further spread and will receive intensive supportive treatment.

It is particularly important to seek treatment as early as possible - early treatment of Ebola significantly increases your chances of survival and recovery.

Supportive treatment of Ebola will usually include rehydration and treating the symptoms as they appear. Blood transfusions may be required to replace lost blood.

The process of receiving blood or blood components from an external source directly into the bloodstream.

An Ebola infection will normally run its course within 2 to 3 weeks. Recovery can be slow, as the infected person is often weak and unwell. Hair loss, eye inflammation and skin shedding can be seen at this stage.

Ebola is a very serious disease. During previous outbreaks, about 90% of all infected people died of the disease. [1] However, during the 2014-15 outbreak the mortality rate had dropped to about 50%. [2] If, and when, new treatments and vaccines are approved for use, the mortality rate will likely drop further.

There is also hope that the virus is becoming less dangerous as it spreads, a common natural process known as viral attenuation.

A person who has recovered from Ebola is immune to that strain of the virus.

Ebola is currently restricted to specific regions in Africa. Unless you are living in or travelling to one of these regions, you will not be exposed to Ebola.

If you are in an area where Ebola is active, steps you can take to reduce your chance of catching Ebola include:

There is currently no vaccine to protect against Ebola, but several vaccine candidates are being fast-tracked towards approval. If successful, an Ebola vaccine may be available in the not-too-distant future.

What are the symptoms of Ebola?

Signs and symptoms of Ebola initially resemble those of influenza. They usually appear any time from 2 to 21 days after infection, though the most common time frame is 8 to 10 days. An infected person is normally not contagious to others until symptoms …

Ebola fever is caused by the Ebola virus. It infects many kinds of cells of the human body and can cause internal bleeding and organ failure.

Anyone can become infected with Ebola if exposed to the virus.

Ebola is a contagious disease. At present, the transmission rate of the virus is low.

How is Ebola spread?

The Ebola virus passes from person to person via bodily fluids, including blood, saliva, semen or vaginal secretions, urine, feces, vomit, mucous and tears. You can also become infected by coming into contact with infected animals or eating their meat. The virus can …

How is Ebola diagnosed?

If Ebola is suspected by its clinical symptoms, a blood test will be performed to look for the virus or antibodies to it.

How is Ebola treated?

At present, there is no specific treatment for Ebola. A person suspected of being infected will be quarantined to prevent further spread and will receive supportive treatment. It is particularly important to seek treatment as early as possible: early treatment of …

Can Ebola be prevented?

The best way of preventing Ebola is to avoid close contact with people who have the disease.

Are there different types of Ebola?

There are five strains of the Ebola virus, four of which are dangerous to people.

Will Ebola keep coming back?

If you have recovered from Ebola fever, you are immune to that strain of the virus. On a public health perspective, future outbreaks of Ebola may occur.

What is the outcome for Ebola?

SARS is a highly infectious respiratory viral disease, which presents much like flu (fever, sore throat, dry cough, headache, chills, stiff muscles). Quarantining of patients is the only option, however there have been no reported cases of SARS since 2004.…

Dengue fever is an infectious viral disease transmitted by mosquitoes in tropical and sub-tropical climates. Most people with dengue fever suffer unpleasant symptoms, such as fever, headache and vomiting, but will make a full recovery. However, repeated infections can result in a form of haemorrhagic fever.…

Malaria is a parasitic blood infection acquired through the bite of certain infected mosquitos. Malaria destroys red blood cells in the body causing tiredness, fever and unwellness. Taking preventative measures when travelling to areas with malaria is recommended.…