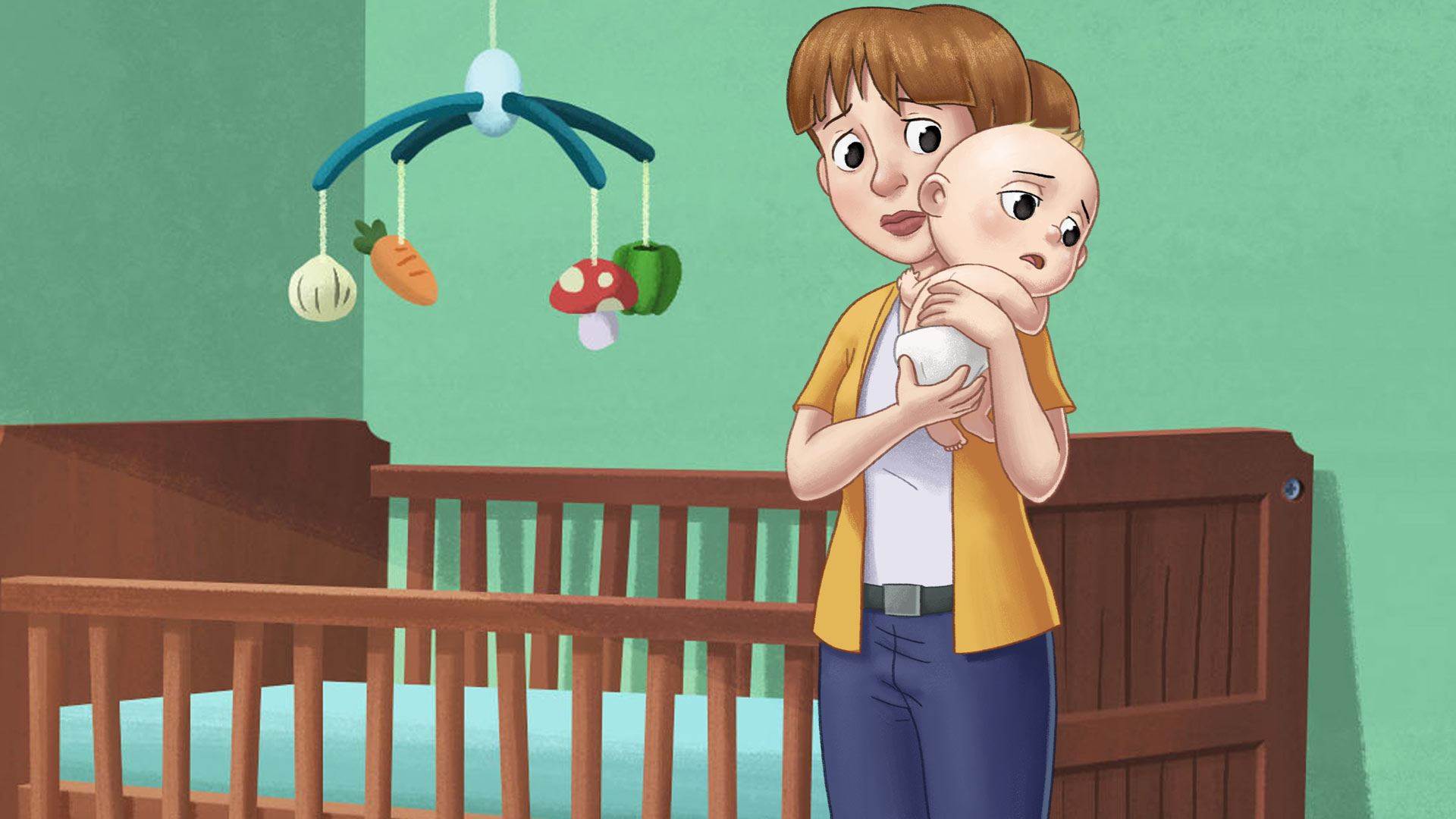 Bronchiolitis is a type of chest infection that commonly affects children under 12 months of age. It occurs when the very small airways in the lungs, called the bronchioles, become inflamed and swell up.

Most cases of bronchiolitis start to get better on their own within a few days. However, some cases can be severe and need to be treated in hospital.

These infections can cause the small airways to become inflamed and produce more mucus than is normal. This leads to coughing and can cause difficulty breathing.

Bronchiolitis is contagious, which means it can be easily passed on to another person. Bronchiolitis can be spread by breathing in the droplets from an infected person's sneeze or cough. 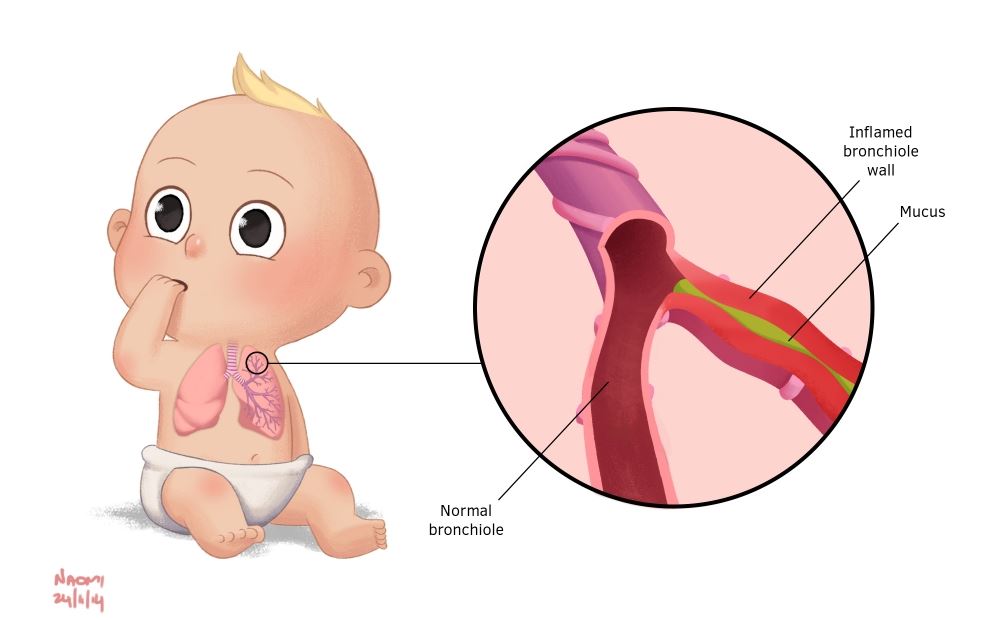 A common virus that causes mild cold-like symptoms in adults and healthy older children. It can cause more serious lung and airway infections in infants or people with serious illnesses.

Bronchiolitis commonly occurs in babies less than 12 months old, most often in infants under six months. Babies have an increased risk of developing severe bronchiolitis if they:

If bronchiolitis occurs in children over 12 months of age, asthma should be considered.

Any disease that affects the lungs and airways.

At first the symptoms of bronchiolitis may appear similar to a common cold. This may include:

These symptoms may last one to two days, before becoming worse. As it progresses, the symptoms of bronchiolitis may include:

Some cases of bronchiolitis can be very severe and require urgent medical attention or hospitalization. The signs of severe bronchiolitis include the baby having difficulty with feeding or reduced feeding, breathing very quickly, turning blue around the lips or fingers (which is a sign of not getting enough oxygen) and sucking in of the chest wall with breathing.

To diagnose bronchiolitis, a doctor may ask questions about your baby's symptoms including feeding and if they have any other medical conditions. The doctor will use a stethoscope to listen to your baby's breathing and heartbeat. In particular, they will listen for crackling and wheezing sounds during breathing, which can be an indication of bronchiolitis.

Because bronchiolitis is usually caused by a virus, antibiotics will not help to clear the infection. Over-the-counter pain-relief medication, such as acetaminophen, may help to relieve some of the symptoms, such as fever. Other things that may help your baby's recovery include:

Severe cases of bronchiolitis may need to be treated in hospital. Your baby may be admitted to hospital if they are having trouble breathing or are refusing food. While in hospital, their condition will be monitored closely to make sure they are getting enough oxygen. They may need to be given extra oxygen if they are having trouble breathing, or extra fluids if they have become dehydrated and are not feeding enough.

Some babies with bronchiolitis may also develop a secondary bacterial infection, which is a second infection that is caused by bacteria that develops after the viral infection.

Most cases of bronchiolitis will get better on their own. Symptoms generally last a few days to a couple of weeks, although the cough may last up to a month. It generally does not result in any lasting health problems. Severe cases of bronchiolitis in which the baby has difficulty breathing or feeding and cases that are complicated by other medical conditions may need to be treated in hospital.

Bronchiolitis is a type of chest infection that commonly affects children under 12 months of age. It occurs when the very small airways in the lungs, called the bronchioles, become inflamed and swell up.

What are the symptoms of bronchiolitis?

At first, the symptoms of bronchiolitis may appear similar to those of a common cold. These may include a runny nose, a fever and coughing. As the condition progresses, the symptoms can also include fast breathing, wheezing, coughing and trouble …

Bronchiolitis is a common chest infection that affects the small airways in the lungs, called bronchioles. It is commonly caused by viruses, including the respiratory syncytial virus (RSV) and rhinoviruses, which cause the common cold, and the influenza virus, …

How is bronchiolitis diagnosed?

To diagnose bronchiolitis, a doctor may ask you questions about your baby's symptoms and if they have any other medical conditions. The doctor will use a stethoscope to listen to your baby's breathing and heartbeat. In particular, they will listen for …

How is bronchiolitis treated?

As bronchiolitis is usually caused by viruses, antibiotics will not help to clear the infection. Over-the-counter painkillers, such as acetaminophen, may help to relieve some of the symptoms such as fever. Allowing your baby to get plenty of rest, keeping them …

Yes, the viruses and bacteria that cause bronchiolitis are infectious and can be easily passed on to another person. Bronchiolitis can be spread by breathing in the droplets from a sneeze or a cough of an infected person.

Can bronchiolitis be prevented?

There is no way to prevent bronchiolitis. As the condition can be contagious, keeping your baby home from childcare if they have it may help prevent it spreading to other children.

If my baby has bronchiolitis, will he develop asthma later in life?

Many children who develop bronchiolitis as a baby go on to develop asthma later in life. The link between the two conditions is not clear. It is not known whether bronchiolitis increases the risk of asthma, or whether …

Bronchiolitis can be very serious, especially for very young babies, or babies that have other medical conditions. Many cases of bronchiolitis start to get better within a few days, though a cough may last a couple of weeks. Babies with bronchiolitis need to be …

Coughing is your body's way of getting rid of any foreign material or mucus in your lungs. Coughing can be a response to breathing in dust or fumes that irritate the nerve endings in the airways, or can be a symptom of a medical problem, such as a lung infection caused by bacteria or a virus, or a long-term lung disease such as asthma.…

How to use an asthma spacer

A step-by-step guide to using an asthma inhaler: 1. Put the spacer together as directed by the instructions; 2. Remove the cap on the puffer; 3. After shaking the puffer, insert it into the end of the spacer; 4. Place the mouthpiece between your teeth and close your lips around it. Ensure there are no gaps around the mouthpiece. For young children, place the mask to cover your child's nose and mou…