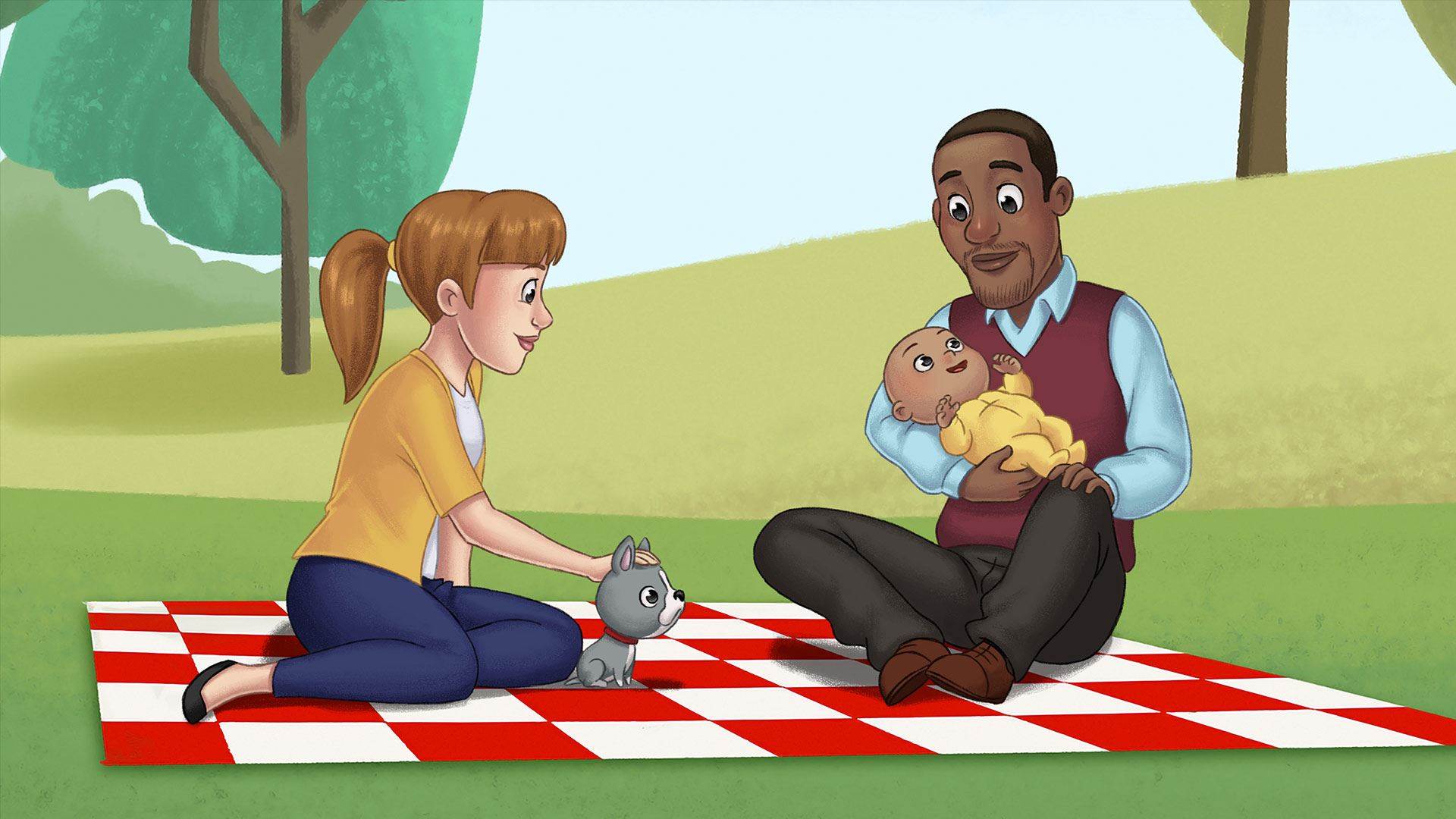 Bringing home a new baby is tremendously exciting, but if you have pets, you may need to do a little preparation ahead of time to make sure that the whole family adjusts well to the new arrival.

Some people can be fearful about the risk a pet may pose to a small child, but there is no need to panic and, generally, no need to give up your much-cherished pet. Indeed, having pets around can be a wonderful and enriching experience for children as they grow up.

However, babies and small children can be more vulnerable to injury from pets and also to infections that can be carried by pets, because their immune systems are not fully developed.

It is important to take some time to think about how you are going to manage the day-to-day interactions between children and pets. Employing a few commonsense precautions mean that all members of the family can stay healthy and enjoy one anothers' company.

There is a wide range of infections that can be passed from animals to humans. If you are concerned that this has happened, it is important to consult your doctor.

Some of the more common infections among household pets are:

Campylobacter infection can cause gastroenteritis, with symptoms including vomiting, diarrhea and stomach cramps. These bacteria can be present in the feces (poo) of pets such as dogs and cats and is passed to humans when the bacteria enters the mouth.

Sandpits contaminated with feces is one method by which the bacteria can be passed to small children. Adults may be infected through contact with contaminated baby nappies.

Cat-scratch disease is caused by infection with Bartonella henselae bacteria. As the name suggests, it tends to occur because of being scratched or bitten by a cat. It is not passed from person to person.

The condition is more common in children than adults and causes painful, swollen lymph glands a number of weeks after the initial infection, and sometimes fever. However, symptoms are generally mild and the condition tends to get better without treatment.

Toxoplasmosis is a parasitic infection with a type of protozoa called Toxoplasma gondii. Humans can be infected by coming into contact with infected animal feces, most commonly from cats.

It can infect young children through contact with feces or contaminated soil and can cause birth defects in an unborn baby if a pregnant woman contracts the infection.

Salmonella are bacteria that are commonly carried by amphibians and reptiles such as turtles, tortoises, lizards and snakes. They can also be carried by cats, dogs and rodents such as mice and guinea pigs. Salmonella bacteria have also been linked to some dog foods.

Children under five years of age can be particularly vulnerable to this infection. Salmonella infection tends to cause gastroenteritis, with symptoms including vomiting, diarrhea and stomach cramps. In some cases it can spread into the bloodstream and cause a severe infection that can be life-threatening.

Histoplasmosis occurs when the fungus Histoplasma capsulatum is breathed in from the droppings of bats, or birds such as pigeons.

It can cause symptoms similar to pneumonia such as cough, chest pains and fever. It can also lead to damage of the retina later in life.

Infants can be prone to more severe forms of the disease.

Infection with Chlamydiophila psittaci is called psittacosis or parrot fever. These bacteria can be carried by birds of the parrot family (such as budgerigars), as well as canaries, chickens and pigeons.

Psittacosis infects the lungs, causing symptoms such as fever, cough, headache and shortness of breath.

Reducing the risk of disease

Simple hygiene measures can reduce the risk of infection being passed between pets and small children. These include:

Preparing pets for the new arrival

When a new baby arrives in the household, it generally creates big changes in everyone's routines, pets included. You can make the transition easier and less stressful for everyone by spending some time thinking about how you want things to work before the baby comes home and getting your pets used to these new arrangements.

You may also want to consider installing safety gates in the doorways of some rooms, if you wish to block pets' access.

The first consideration with your dog is general obedience. If your dog is trained to obey your commands, it is going to be easier to control its behavior once the baby comes home. If your dog has any obedience issues, it is a good idea to address them before you are busy with your new arrival. Dog obedience schools or seeking the advice of a professional dog trainer can help.

You can also begin to introduce new routines and objects into the house in the months before the baby's arrival. Specific rules - such as which areas of the house or pieces of furniture are now off limits, or 'no jumping up on people' - need time to be reinforced. It is important to be consistent with dogs so that they clearly understand what is expected of them. One method to help accustom your dog to the presence of a baby is to carry a doll around for a while, so that they get used to the sight of a small baby in your arms.

You may wish to consider hiring help, such a dog walker, or sending the dog to doggy day care during the first couple of weeks after the baby arrives, so that your dog's needs for activity and company are not overlooked. It is also not a good idea to lavish too much extra attention on your dogs in the weeks before the baby arrives in an attempt to 'make up' for the coming change, as it can just emphasize the change in the weeks after the baby comes home.

It is also important to be aware that all interactions between dogs and small children need to be supervised. Small children can be quite provoking for pets and do not recognize cues that a dog may be angry or in pain. When they are old enough, teaching small children how to handle pets appropriately is another important part of making sure that everyone gets along.

If there is any doubt about a dog potentially being aggressive towards a child, it is very important to seek professional advice.

Like dogs, cats are sensitive to changes in routines, so it is a good idea to do a little preparation in the months before the baby arrives home to accustom your cat to the new situation.

One old wives' tale is that cats may suck the air out of a baby's lungs. This is not true, but cats do like to curl up against warm objects. If they do this with a sleeping baby, it can make it difficult for the baby to breathe. Restricting the cat's access to the baby's sleeping area may be advisable.

I'm pregnant and I have a cat. Do I need to worry about toxoplasmosis?

Cats can pass on a parasitic infection called toxoplasmosis that can cause infection in pregnant women and lead to birth defects. However, by taking simple hygiene precautions such as washing your hands after handling …

Can having reptiles or amphibians in the house be a problem if you have a young baby?

Reptiles such as lizards, turtles and snakes, and amphibians such as frogs, can carry Salmonella bacteria which can cause serious illness in small children. You may wish to remove them from the house, or …

What diseases can pets pass on to children?

Pets can carry a range of bacteria, fungi and parasites that can be passed on to children, either by contact with the pet or contact with contaminated feces (poo). Good hygiene, particularly after handling pets, can help reduce the risk of …

How can I prepare my dog for the arrival of my baby?

The arrival of a new baby is a big change in a household routine. Dogs are very sensitive to routines, so you can help by gradually making changes in how you do things in the months before the baby arrives. It is also important to make …

How can I prepare my cat for the arrival of my baby?

The arrival of a new baby is a big change in a household routine. Cats are very sensitive to routines, so you can help by gradually making changes in how you do things in the months before the baby arrives.

Is having birds in the house a problem if you have a young baby?

Birds and their feces (poo) can pass a number of infectious diseases on to people, and babies can be more at risk because their immune systems are not fully developed. It is important to be careful with hygiene, particularly …

Can my child kissing a pet increase their risk of disease?

Kissing a pet can increase the risk of contracting a disease from them. To reduce any risk, it is best to teach children not to kiss pets.

Is it safe to leave my child alone with a pet?

It is important to supervise all contact between young children and pets. Small children often do not pick up on cues that their behavior may be upsetting an animal. This is particularly true with dogs.

Can contact with dog or cat feces (poo) cause illness?

Contact with dog or cat feces (poo) can spread infection to humans. Cleaning up after your animals regularly, paying particular care to areas such as sandpits where children play, can help to reduce the risk of illness.

Should I give my dog or cat extra attention before the baby arrives?

Giving your dog or cat extra attention before the baby comes can make changes after the baby arrives home more difficult. Particularly for dogs, it is important to bear in mind that they still require exercise and …

How to bathe a baby

Most babies do not need a bath every day. With their regular nappy changes and face-wiping after feeding, a bath every other day is usually enough. In fact, bathing your baby too often can dry out their skin. Bathing can be done at any time of day and it is best to start with sponge baths and avoid tub baths until your baby's umbilical cord falls off.…

How to choose and change a diaper

Choosing the right diaper size for your baby is important to prevent leaking. The diaper should fit snugly and not gape open, even when your baby is crawling and playing. Some diapers have leg leak barriers that further help prevent leakage. As your baby develops, their bowel and bladder movements tend to become less frequent and larger in size, so they will need larger, more absorbent diapers and…

How to clean your teeth

Clean and healthy teeth and gums are essential for good oral health. Regular brushing and flossing can help prevent tooth decay, gum disease and tooth loss. Together with regular dental check-ups and a healthy, balanced diet, your teeth can and should last a lifetime.…

Your new baby needs a safe, caring environment in order to thrive. It's your duty as a parent to make sure they are kept safe from harm in your home and outside of it. Looking after a newborn is a combination of common sense, love and patience – it is important that you, your partner and any other caregivers all agree on safety.…