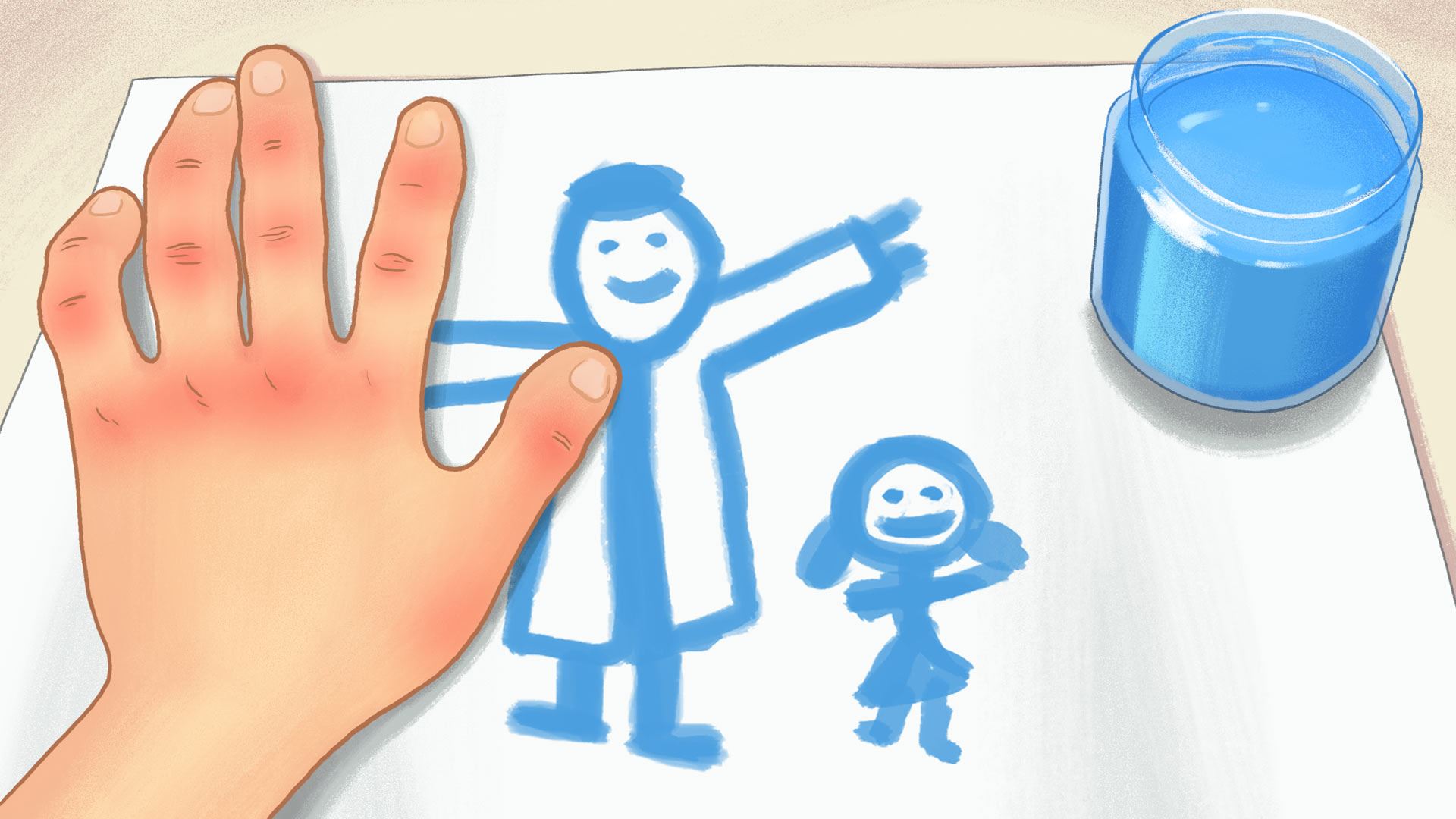 What is arthritis in children?

The cause of arthritis in children is usually an autoimmune disorder. This means that the body's immune system, which normally fights off harmful bacteria and viruses, mistakenly attacks the body's healthy cells and tissues. In the case of arthritis, the immune system particularly attacks healthy joints. The exact reason why the body does this is unclear; however, research indicates that both genetic and environmental factors play a role.

Risk factors associated with juvenile arthritis include being female (it is more common in girls) and having a family history of particular autoimmune conditions, such as anterior uveitis (inflammation of the inner eye), ankylosing spondylitis, inflammatory bowel disease and psoriasis.

A type of inflammatory arthritis that affects the joints of the spine, particularly where the spine attaches to the pelvis.

A group of conditions characterized by chronic, episodic inflammation of the bowels, including Crohn's disease and ulcerative colitis.

There are multiple types of arthritis in children. These include:

Oligoarticular arthritis is when four or less joints are affected in the first six months of the illness. It commonly affects larger joints including elbows, wrists, knees and ankles. It often affects joints on each side of the body differently; for example, the left wrist may be affected but not the right one. There is an increased risk of anterior uveitis, which involves inner eye inflammation. Oligoarticular arthritis affects more girls than boys and can begin at around 2-4 years of age.

Systemic arthritis, also known as Still's disease, affects the entire body, including the skin and internal organs. A high fever, chills and skin rash are also common in the early weeks or months of the condition. Systemic arthritis can also cause inflammation of the lining of the lung (pleurisy) or heart (pericarditis), cause an enlargement of the liver or the spleen, or result in swollen lymph nodes. Systemic arthritis is equally common in boys and girls.

Enthesitis arthritis, also known as juvenile spondylitis, is a form of arthritis that causes an inflammation of the area where tendons attach to the bones. This condition more commonly occurs in boys and develops later on in childhood or during adolescence.

Psoriatic arthritis refers to inflammatory arthritis due to psoriasis, an autoimmune disorder. Skin and joint problems are likely to occur around the same time, usually around 10 years of age. Although symptoms are usually mild, some children may experience severe or disabling problems into adulthood. For example, as the bones are still developing, juvenile psoriatic arthritis can permanently impair growth. 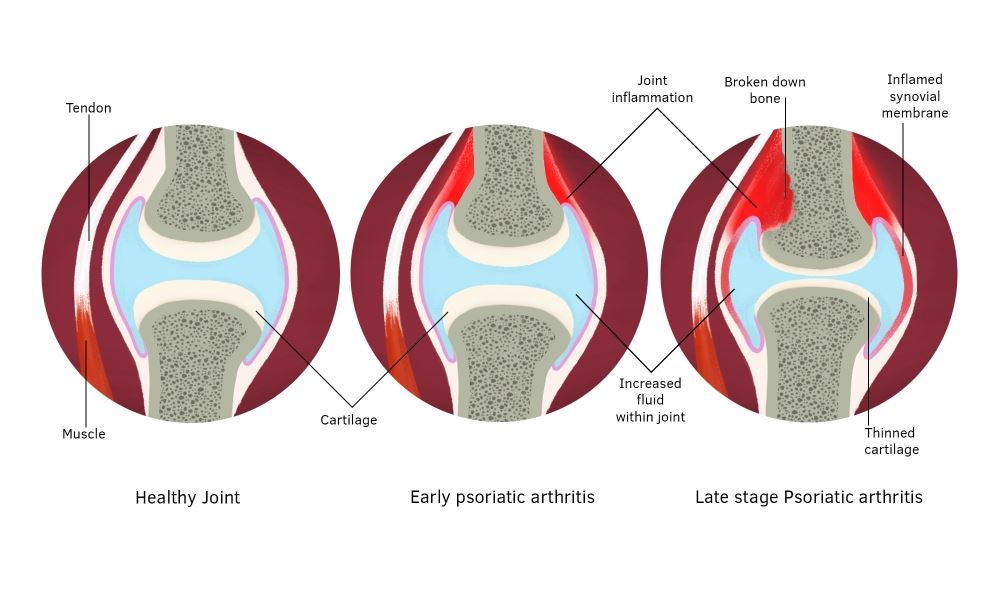 Psoriatic arthritis causes the breakdown of bone and cartilage.

An organ in the abdominal cavity that is involved in filtering out old blood cells and fighting infection.

Symptoms vary between children and can fluctuate between flare-ups, when symptoms are worse, and other times when no symptoms are present. Juvenile arthritis can affect one or multiple joints depending on the type. Common signs and symptoms can include: 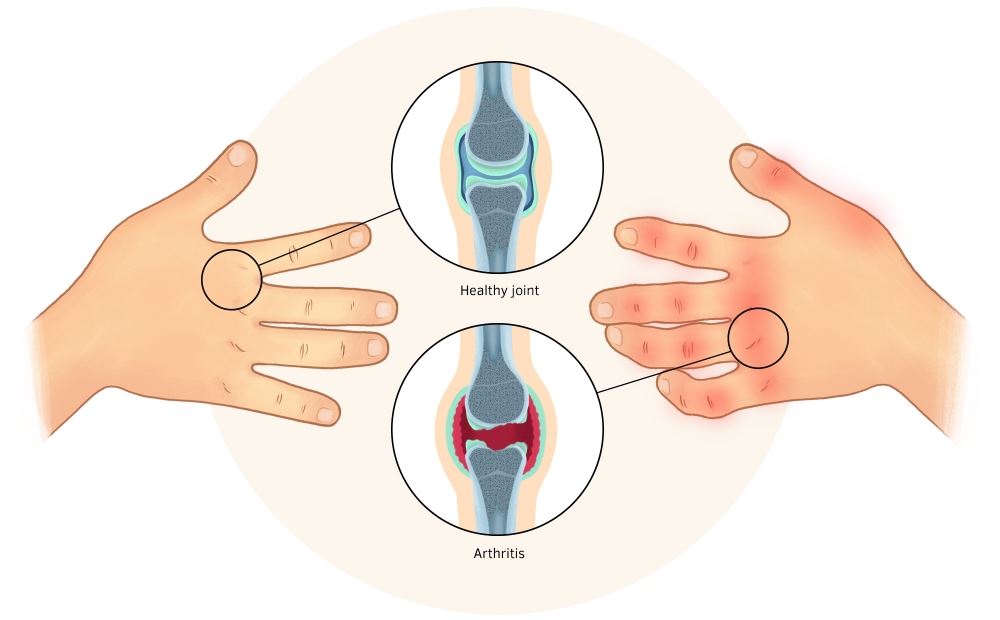 Arthritis is an inflammation of the joints.

Arthritis in children can be diagnosed by your doctor. Your doctor will ask about your child's symptoms, as well as any family history of arthritis conditions. You may also be referred to a specialist (rheumatologist) who looks specifically at conditions relating to the joints. A diagnosis may require numerous tests to eliminate the possibility of other medical conditions. Tests may include:

A nuclear scan used to detect abnormalities in the bone caused by cancer, arthritis, infection or injury.

An ultrasound image of the heart.

A scan that uses high-frequency sound waves to produce images of the body’s internal structures.

The aims of treatment for juvenile arthritis are to control any joint damage, control swelling and limit any pain. Your doctor will give suggestions for the best treatment for your child that will aim to maintain a high level of physical ability and a good quality of life. Some treatment options can include medications and physical therapies, splints and sometimes surgery.

Depending on the type of arthritis, various medications may be prescribed by your doctor. These can include:

Physical therapies can help to increase the strength of muscles, increase joint flexibility and aid the normal development of the limbs. They can also help to manage pain, as strong muscles can help to support affected joints. Depending on the affected joint, different exercises may be suggested by your doctor or specialist.

Maintenance devices such as splints made of wood or plastic can be molded around an area to help the movement of joints. They can also prevent joints from becoming stuck in a specific position. In some cases, surgery of the joint may be required.

There is no cure for the condition; however most cases can be successfully managed using medications. The use of disease-modifying antirheumatic drugs (DMARDs) has been shown to be very useful in slowing disease progression. Children with the condition can experience times of remission, where no symptoms are present, and flare-ups, when symptoms appear.

What is arthritis in children?

Arthritis is the inflammation of the joints. Although it is common in adults, it can also occur in children. When it occurs under 16 years of age, it is also known as juvenile arthritis.

What are the symptoms of arthritis in children?

Juvenile arthritis can affect one or multiple joints, depending on the type. Common signs and symptoms can include: Joint stiffness (particularly in the morning), swelling or pain; A skin rash around the affected joints; Fatigue, …

What causes arthritis in children?

The cause of arthritis in children is usually an autoimmune disorder. This means that the body's immune system, which normally fights off harmful bacteria and viruses, attacks the body's healthy cells and tissues. In arthritis, the immune system …

How is arthritis in children diagnosed?

Your doctor will ask you about your child's symptoms, as well as any family history of arthritis. You may also be referred to a doctor who specializes in joint-related conditions. Some tests may include: X-rays, ultrasounds and bone scans, for …

How is arthritis in children treated?

Treatment of juvenile arthritis aims to control any joint damage and swelling, and reduce the pain. Treatment options include medications and physical therapies, splints and sometimes surgery. Your doctor will suggest the best treatment for your child …

Can arthritis in children be cured?

There is no specific cure for arthritis in children, but the condition can normally be effectively treated or managed during flare-ups of symptoms.

Are both boys and girls affected by juvenile arthritis?

Yes. Both girls and boys can be affected by juvenile arthritis, although it is more common in girls.

How does exercise help arthritis in children?

Physical therapies can help to increase the strength of muscles, increase joint flexibility and aid normal development of the limbs. It can also help to manage pain, as strong muscles can help to support affected joints. Depending on the …

Is arthritis in children contagious?

No, arthritis in children is not contagious.

Are there different types of arthritis in children?

Knee pain is a common symptom experienced by most people at some point. It can be caused by an injury, degenerative disease or other underlying conditions. In most cases, resting the affected knee, elevating the leg and applying ice and gentle compression can help lessen the pain.…

Rheumatoid arthritis is an autoimmune condition that causes inflammation of the lining of joints, resulting in swelling, pain, stiffness and, over time, gradual joint damage. Fortunately, early treatment and appropriate physical activity can improve quality of life.…

Arthritis refers to inflammation of joints. This can lead to stiffness, swelling and pain and may be due to a joint condition, an infection or an autoimmune condition. Most arthritis is chronic, however adhering to treatment plans and some modification of activities can help maintain an active lifestyle.…