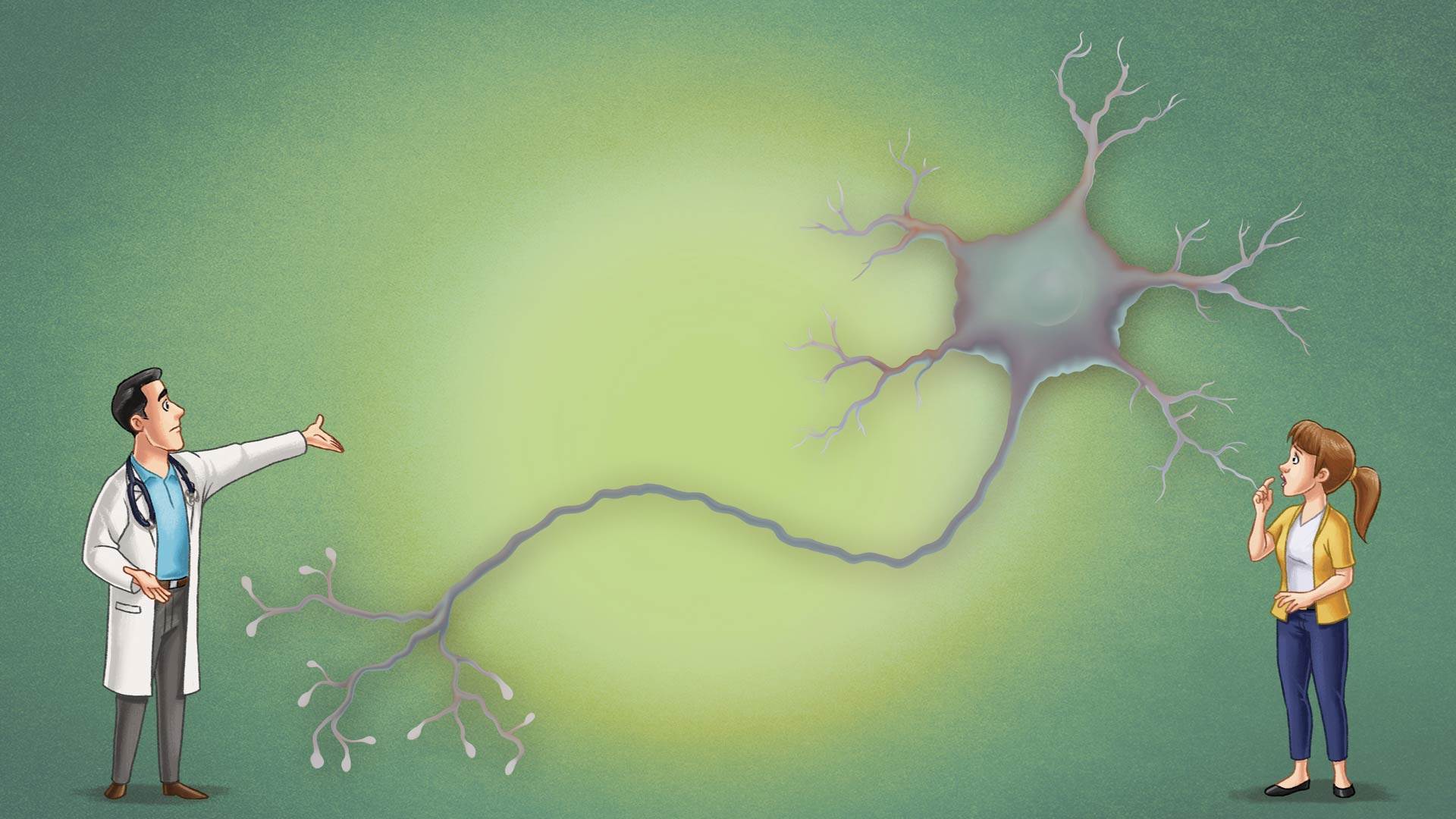 What is Alzheimer's disease?

Alzheimer's disease is a degenerative condition of the brain that causes problems with memory, thinking, language and behavior.

Alzheimer's disease is the most common form of dementia. Dementia is not a single condition, but a collection of symptoms that are caused by brain disorders.

Alzheimer's disease is caused by damage to brain cells called neurons. Neurons transmit the electrical nerve signals that carry information throughout the brain and body. The disease disrupts the neurons' ability to work properly, leading to loss of these signals and of information within the brain. 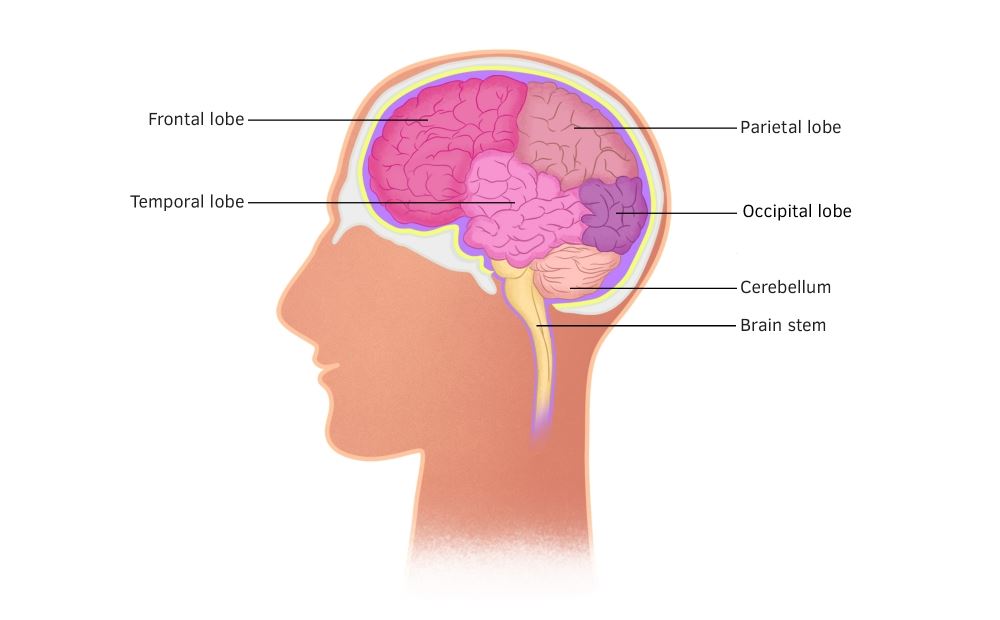 In Alzheimer's disease, the brain contains abnormal amounts of two proteins - amyloid and tau - as well as lower levels of the chemical messenger acetylcholine.

In people with Alzheimer's disease, fragments of the amyloid protein form sticky plaques, which build up outside the neurons. This can destroy neurons that produce acetylcholine. The tau protein has been found to build up inside the neurons.

It is thought that the accumulation of these proteins both inside and outside the neurons impairs the normal function of neurons, eventually leading to death of these brain cells.

Alzheimer's disease follows a gradual course; in its early stages, the brain is able to compensate for the damage to neurons. However, as the condition progresses, the damage spreads to other parts of the brain, and the symptoms become increasingly apparent.

The symptoms of Alzheimer's disease can be divided into three main stages: 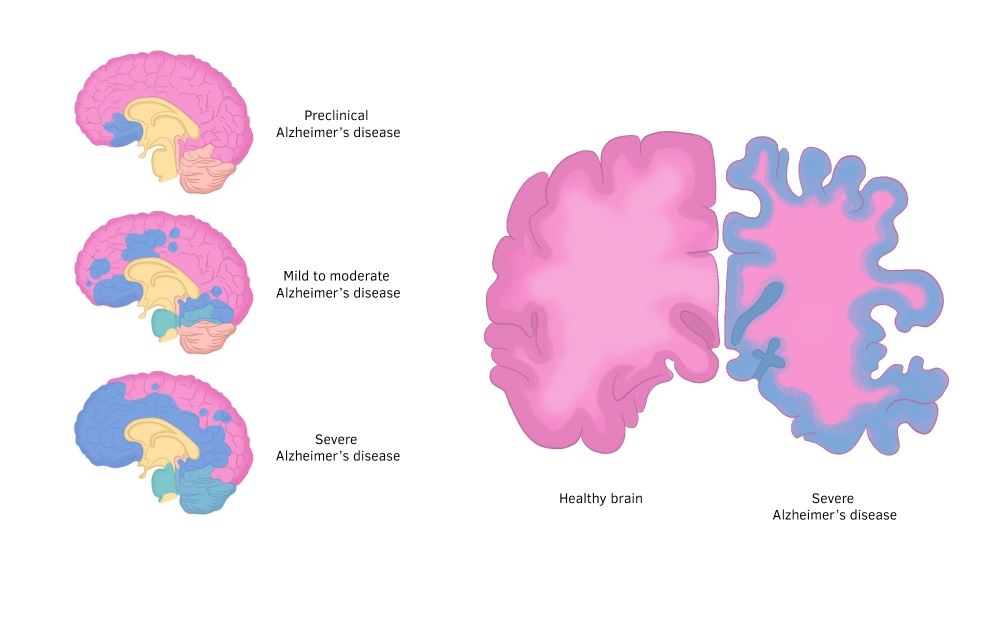 Affected areas of the brain (blue area) as the severity of Alzheimer's disease increases.

Risk factors for Alzheimer's disease include:

A class of diseases that involves the dysfunction of the heart and/or the blood vessels.

A type of fat produced by the body that is necessary for metabolism.

The three main types of Alzheimer's disease can be described as follows:

This is the most common form, accounting for about 90% of cases. This type may or may not be inherited, and usually occurs in people over the age of 65 years.

This is a less common form, accounting for less than one in 10 (10%) of cases. This type may be linked to a specific genetic defect and usually occurs in people under the age of 65. People with Down syndrome are especially at risk of developing this type.

This is an extremely rare type, accounting for less than one in 100 (1%) of cases. This type is entirely inherited, and usually occurs in people under the age of 65 (often under the age of 50).

Alzheimer's disease generally progresses slowly, so the symptoms may initially not be very noticeable. As the disease progresses, the symptoms become more noticeable and may interfere with daily life.

Some of the more common symptoms early on may include:

The early and correct diagnosis of Alzheimer's disease is important, as it:

To diagnose Alzheimer's disease, your doctor may:

Blood tests may be used to exclude other, potentially reversible, conditions that may be mimicking Alzheimer's disease.

Brain imaging, including computerized tomography (CT) and magnetic resonance imaging (MRI) scans may be used in the diagnosis of Alzheimer's disease. These scans provide different kinds of images of the brain. The scans:

A new imaging technique, a version of a positron emission tomography (PET) scan, has been developed that may identify areas and amounts of amyloid plaques formation. This test may help increase the accuracy of diagnosis but is not widely available as yet.

During positron emission tomography (PET) scan, an injection with a radioactive label is administered and then combined with a computerized tomography (CT) scan to produce functional images.

As there is currently no cure for Alzheimer's disease, the goals of treatment are to slow the progression of the disease, manage its symptoms, and set up a care plan to ensure that a person with Alzheimer's disease can continue to live a comfortable life.

Most people with Alzheimer's disease can remain in their homes as the disease progresses, as long as support is available. Carer support is crucial to the management of a comfortable life.

The first step in supportive treatment is to evaluate the self-care needs of the person with Alzheimer's disease. Then, simple changes can be made to the home environment to ensure that they are safe while at home, when driving or when out in the wider community.

Restoring levels of the neurotransmitter acetylcholine is one of the strategies currently used in treating Alzheimer's disease. Medications such as donepezil, galantamine and rivastigmine improve cognition and slow the rate of functional decline. They show the most benefit if used in the earlier stages of disease.

A beneficial effect, if any, may be observed within 3-6 months of starting the treatment. Side effects of these medications may include stomach upset, vomiting, muscle cramps and fatigue.

It is very common for people with Alzheimer's disease to experience depression. Depression can adversely affect cognitive function and add to the stress of carers.

Medication dosage might require adjustments over 1-2 months until the target dose has been reached.

As with most medications, antidepressants may have side effects. Some of the more common side effects include nausea, dizziness, fatigue and sexual dysfunction. There may be more serious side effects if they are taken in combination with other medications, herbal remedies, or alcohol.

There is a very rare risk of antidepressants causing or increasing suicidal thoughts. This risk is at its greatest during the first weeks of commencing treatment, or when the dosage is adjusted. Your doctor can advise you on ways to manage these changes.

People with Alzheimer's disease may experience anxiety, agitation and psychosis (hallucinations and delusions). Such symptoms may be treated with antipsychotic medication. However, the use of these medications is controversial, and may depend on the preferences of the treating doctor.

The antipsychotic drug risperidone has been shown to decrease the symptoms in some cases of Alzheimer's disease. However, there is some evidence that the use of antipsychotics may be associated with a higher risk of adverse outcomes. Common side effects of risperidone include agitation, anxiety, trembling, problems with urination, involuntary movements, weight gain and excessive thirst.

People with Alzheimer's disease may experience sleeping difficulties (insomnia). Simple measures that can help manage insomnia include limiting naps during the daytime, getting daily exercise and using bright light therapy. If such measures do not help with insomnia, medication to help with sleep may be advised.

A mental state in which a person holds on to a belief despite clear evidence to the contrary.

People with Alzheimer's disease do not usually die from the disease itself, but from its complications. Some of the more serious complications include:

A thin, flexible tube inserted through a narrow opening into a body cavity for removing fluid.

A condition in which a person does not receive the right amount of nutrients such as vitamins, minerals and proteins.

The natural course of Alzheimer's disease is a progressive decline to its terminal stages. Most cases progress over the course of 8-15 years. As the disease progresses, the symptoms become more apparent as do the self-care needs:

As the exact cause of Alzheimer's disease is currently unknown, there are no known ways to definitively prevent the condition, but there may be some ways of delaying the onset of dementia including:

What is Alzheimer's disease?

Alzheimer's disease is an invariably progressive condition of the brain that causes problems with memory, thinking, language and behavior.

What are the symptoms of Alzheimer's disease?

For the majority of cases, it is not known why some people develop Alzheimer's disease. Most cases are not caused by known changes in genes. People with Alzheimer's disease have been shown to have abnormal levels of the proteins amyloid and tau, which build …

Who gets Alzheimer's disease?

How is Alzheimer's disease diagnosed?

Alzheimer's disease can be diagnosed by your doctor taking a detailed medical history, conducting laboratory tests to rule out other possible causes of dementia and using brain imaging.

How is Alzheimer's disease treated?

Although there is no cure for Alzheimer's disease, many people with Alzheimer's disease are treated with a combination of supportive treatment to allow them to continue a comfortable life. Medications may be used to enhance cognitive function and …

Can Alzheimer's disease be cured?

Can Alzheimer's disease be prevented?

There is no known prevention for Alzheimer's disease. However, research suggests that you may be able to reduce your risks by maintaining a high level of fitness and avoiding smoking and excessive consumption of alcohol.

What is the outlook for Alzheimer's disease?

Alzheimer's disease is an invariably progressive disease. Most cases will progress to their terminal stages between 8 and 15 years from the first onset of symptoms.

How common is Alzheimer's disease?

Dementia is a collection of symptoms caused by disorders of the brain that cause damage and death to brain neurons. Dementia can affect memory, language, behaviour and the ability to carry out complex tasks. The decline associated with dementia is often gradual and more common in the older population.…

Parkinson’s disease is a degenerative condition of the brain that causes a range of symptoms, including problems with controlling movements. It is caused by a reduction in the amount of an important chemical messenger in the brain called dopamine.…

Benign prostatic hyperplasia is an enlargement of the prostate gland, which is common in older men. It can lead to problems with urination, however it can be managed through lifestyle changes, medications and/or surgery.…